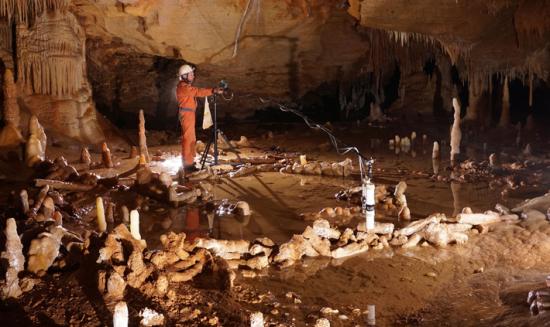 Neanderthals are thought to have made ring-shaped structures out of whole and broken stalagmites deep in a French cave. Courtesy © Etienne FABRE-SSAC

A fifth of a mile inside Bruniquel Cave in southwestern France, a chamber holds several enigmatic ring-shaped structures made from whole and broken stalagmites. Radiocarbon dating of a burned bear bone found among them initially suggested they date to around 47,000 years ago. But this year, uranium-thorium dating that focused on the stalagmite tips and deposits that accumulated on them after they were broken found the structures were actually built around 176,000 years ago. Researchers concluded that since Neanderthals were the only humans living in the area at the time, they must have assembled them. “When we first got this date, I thought it was unbelievable,” says Jacques Jaubert, an archaeologist at the University of Bordeaux. “We had no idea that Neanderthals were operating so deep inside caves at this time.” While the structures also provide evidence of group collaboration, the reason they were built remains a mystery. 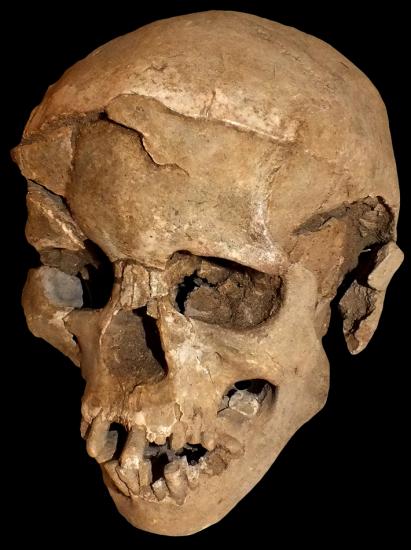 The skull of one of a group of hunter-gatherers bears evidence of a brutal attack that took place on the shores of Lake Turkana. Image by Marta Mirazon Lahr, enhanced by Fabio Lahr

Organized aggression is typically associated with disputes over ownership of land or possessions. But the 10,000-year-old remains of 27 individuals discovered at what was once the southwestern edge of Kenya’s Lake Turkana suggest that this may not always have been the case. The unburied bodies, found at a site called Nataruk, were of hunter-gatherers and were unaccompanied by evidence of settlements or valuables. Instead, they paint a picture of pure carnage: The bones of 21 adults and six children show lesions most likely resulting from arrows and clubs. Weapons found at the site were made from obsidian sourced from afar, indicating the attackers were not local.

University of Cambridge archaeologist Marta Mirazon Lahr believes that people have always been prepared to fight for what they want, and that the formation of groups results in cultural divisions, thereby justifying warfare. These preconditions for battle “have existed for a very long time,” she says, “independent of the development of farming, material wealth, civilizations, and social hierarchies.” Within this context, the simple choice to hunt or feast on the beach at Nataruk, a plum spot on a lake almost fully encircled by mountains, where animals came for food and water, could have sealed the deceased’s fate.

The Antikythera shipwreck (circa 65 B.C.) is the ancient world’s largest, richest, and perhaps most famous wreck. Discovered in 1900 off the Greek island of Antikythera, the site has yielded hundreds of treasures, including bronze and marble statues, as well as the Antikythera Mechanism, often referred to as the world’s oldest computer. However, an important new discovery was made in summer 2016 when an international team recovered a human skeleton there. The remains, which include parts of the cranium, jaw, teeth, ribs, and long bones of the arms and legs, most likely belonged to a young male. Evidence of at least four other individuals had previously been found at the site, but the newly discovered remains are the first to be uncovered in almost 40 years—and during the age of DNA analysis. According to ancient DNA expert Hannes Schroeder, the discovery might provide the first opportunity to examine the genetics of an ancient mariner. “Human remains from ancient shipwrecks are extremely uncommon,” he says. “DNA analyses can potentially provide fascinating new information on the crew’s genetic ancestry and geographic origins.”

Project codirector Brendan Foley suggests that the individual may have been trapped belowdecks when the ship smashed into the rocks and sank. Parts of the skeleton discovered in 2016 remain in situ and will be further excavated this summer. Foley believes that even more human remains may survive at the site along with other precious cargo.

A 1st-century A.D. wooden tablet found at an excavation in London bears the earliest known reference to Londinium Courtesy © MOLA

The largest and most significant collection of Roman waxed writing tablets is providing an intriguing glimpse into life in early Roman London. More than 400 wooden tablets were unearthed by archaeologists from Museum of London Archaeology (MOLA) during excavations at the site of the Bloomberg company’s new European headquarters. Roman London (called Londinium) was founded around A.D. 50, and the recovered texts, written by ordinary residents, record various names, as well as events and transactions that took place during the settlement’s first few decades.

The tablets, which began to be published in 2016, feature a once-popular method of Roman writing that involved using a pointed stylus to etch letters into a thin layer of wax that had been spread onto a small plank. Since tablets such as these were typically made of wood, they rarely survive. However, the Bloomberg excavation site is located along what used to be the Walbrook River. Most of the tablets discovered there were part of an ancient garbage dump that was used to fill in the wetlands to create buildable land during the Roman era. The muddy, oxygen-free conditions were instrumental in the preservation of the nearly 2,000-year-old tablets. Although the actual inscriptions in wax have long since disappeared, sometimes an overly aggressive scribe applied too much pressure and accidentally etched their writing into the wood beneath the wax.

“The collection is hugely significant,” says MOLA archaeologist Sophie Jackson, “because the tablets date to the first few years of London. They provide new insights into the people who lived, worked, and traded there and administered the new city, and what social, economic, and legal structures were in place.”

Thus far, 19 of the 405 tablets have been decoded through an exacting process that uses multidirectional photography and microscopic analysis. Among these are Britain’s oldest handwritten document and the earliest known reference to Londinium. Some texts appear to be legal records and contracts, while others are correspondence. And one tablet, which simply contains the alphabet, may have been part of a school lesson.