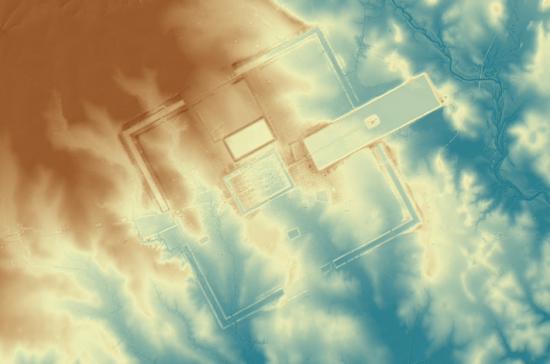 Lidar scans have revealed the outline of an urban grid in the Angkor region of Cambodia. Courtesy Damian Evans/CALI

Researchers in northwestern Cambodia have carried out the largest airborne laser-scanning archaeological project to date. They used lidar to survey 900 square miles of the densely forested Angkor region, revealing centuries-old cities that once belonged to the vast Khmer Empire.

The kingdom’s provincial centers turn out to have many characteristics in common with Angkor, the metropolis surrounding the iconic Angkor Wat temple. All share a checkerboard of city blocks within a central moat, enormous reservoirs and canals used for water management, and mysterious mounds and “coiled” embankments built into the earth and seen at every eleventh- and twelfth-century temple site.

Archaeologist Damian Evans had spent a decade searching for evidence of an industrial city at a site east of Angkor called Preah Khan of Kompong Svay. When he looked at the new survey unobscured by vegetation, the three-mile-by-three-mile enclosed urban grid—the largest in Southeast Asia—appeared in plain sight. “It reveals this degree of complexity—the scope and scale at which human beings adapted the environment,” he says. “That’s what lidar illuminated so beautifully in Cambodia.”

By JARRETT A. LOBELL 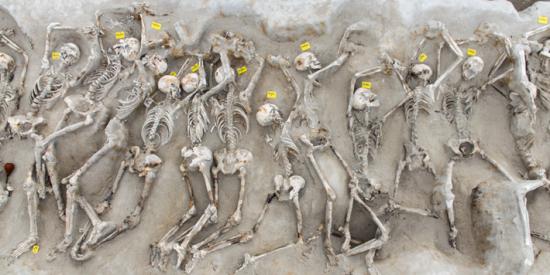 The remains of 80 men were discovered shackled together at the wrists in a mass grave at a necropolis near Athens Courtesy Ephorate of West Attica, Piraeus and Islands, Yiannis Asvestas, @All rights reserved

The end of the seventh century B.C. was a tumultuous period in Athenian history. Though once ruled by a king, the increasingly powerful region of Attica, home to Athens, had come to be presided over by aristocrats who maintained their hold on power through landownership and lifetime appointments. But as the century drew to a close, the political climate was primed for a new type of government—that of a single ruler, or tyrant. An evocative gravesite on the outskirts of Athens is a testament to this contentious moment in history.

Excavators at the Phaleron Delta necropolis have uncovered the remains of 80 men, shackled together at their wrists, lying in a mass grave. The most recent osteological studies have determined that the majority of the men were between 20 and 30 years old, although four were much younger, and that all 80 had been killed in the same manner—with a fatal blow to the head. The discovery of two small vases buried with them has allowed archaeologists to date the grave to the mid-to-late seventh century B.C., suggesting to project director Stella Chrysoulaki that the men were executed in the course of one of these attempts to gain political primacy. “For the first time,” Chrysoulaki says, “we can illustrate historical events that took place during the struggle between aristocrats in the seventh century and led, through a long process, to the establishment of a democratic regime in the city of Athens.”

By JARRETT A. LOBELL 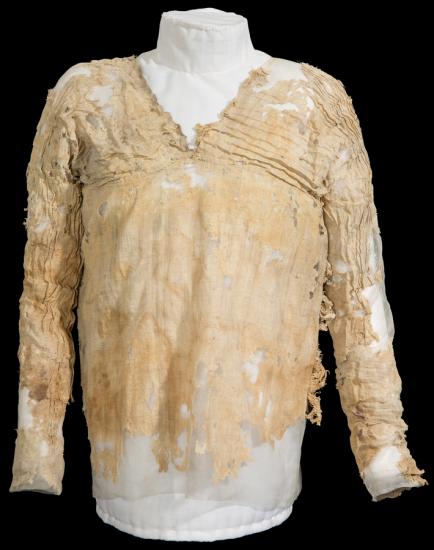 It’s almost impossible to imagine that an item of clothing worn thousands of years ago has survived to the present day. But the “Tarkhan Dress,” named for the town in Egypt where it was found in 1913, has endured—and has now been precisely dated using the latest radiocarbon dating technology. Researchers have determined that the very finely made linen apparel dates to between 3482 and 3103 B.C., making it the world’s oldest woven garment. Alice Stevenson, curator at the Petrie Museum of Egyptian Archaeology, says, “The dress has provided people with a real sense of the antiquity and longevity of the ancient Egyptian state and society.”

A prominent woman was buried (top) 4,600 years ago in Peru along with accessories such as a bone brooch (above) carved to resemble an Amazonian monkey. © Zona Arqueológica Caral

The role of women in ancient cultures has received increased attention in recent years, from that of female pharaohs in Egypt to Viking wives in northern Europe. And now, archaeologists in Peru have found signs that women there held positions of prestige at the earliest stages of civilization. At the site of Áspero, a female skeleton was found decorated with shells of the genus Spondylus, which come from hundreds of miles away in far northern Peru and were a sign of authority for centuries in Andean cultures. About 45 years old when she died, the woman had clothing accessories made of bone carved in the form of seabirds and Amazonian monkeys, also status symbols, says archaeologist Ruth Shady Solís of San Marcos University. Most striking is the burial’s age—some 4,600 years ago, near the dawn of the fishing and farming civilization that thrived on Peru’s coast. Shady Solís found sculpted female figurines dating from the same period—more proof, she believes, that women occupied prominent social positions.

By ERIC A. POWELL

Images of native Taino deities (top) have been found close to Christian inscriptions (above) in a cave on Puerto Rico’s Mona Island. Courtesy Jago Cooper

Since at least the twelfth century, indigenous Taino people living on Mona, a small island west of Puerto Rico, ventured deep into its vast network of caves and left images of cemies, or deities, on the chambers’ soft limestone walls. Now a team led by Alice Samson of the University of Leicester and British Museum archaeologist Jago Cooper has found that one of the caves also contains markings left by sixteenth-century Spaniards. “The entrance to this cave is quite difficult to find,” says Cooper. “So the Europeans were probably, at least initially, led there by Taino.” The team has recorded more than 30 historic inscriptions, including crosses, Latin phrases from the Bible, and even the signatures of individuals, such as a sixteenth-century royal official named Francisco Alegre, who had jurisdiction over Mona at one time.

Cooper says that while the European inscriptions were placed close to the indigenous markings, they don’t overlap, leaving the impression that the Spaniards were careful not to deface the Taino rock art. “It’s as if the two traditions were in dialogue with one another,” says Cooper, noting that it is also possible that Taino who had converted to Christianity made some of the crosses. “This is tangible evidence of how people, both European and indigenous, were forging new identities in the Americas. The cave embodies the personal experience of contact between these two cultures.”