Tisul (Russie) :Pagan God Confirmed as Being up to 4,200 Years-old

Likely from the Okunev culture, might this mysterious ancient figurine with the angry face be a children's 'rattle', to ward off evil spirits? 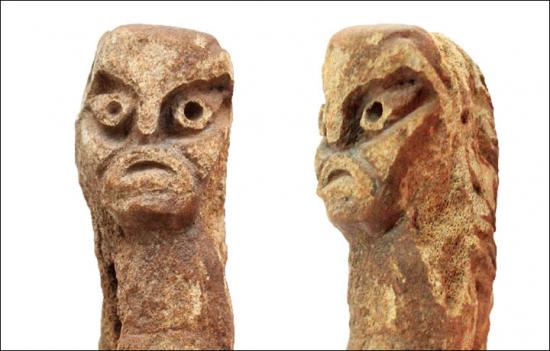 We can say that this figurine is unique, as nothing identical has been found so far. Picture: Pavel German & Vladimir Bobrov

Fisherman Nikolay Tarasov, 55, made the remarkable Bronze Age 'catch' when he dipped his net in the Dudet River near his home in Tisul, Kemerovo region, on a fishing expedition for tench and carp.

Instead of a fish, he netted a strangely shaped stone - a fossilised figurine - the catch of a lifetime. 'I was about to throw it back in the water - but at the last second I looked at it more closely,' he said.

'And I saw a face. I stopped and washed the thing in the river - and realised it wasn't a stone of an unusual shape, as I thought earlier - but a statuette.'

It has almond shaped eyes, a large mouth with full lips, and a ferocious facial expression.

'On the reverse side on the head the carver had etched plaited hair with wave like lines. Below the plait there are lines looking like fish scales,' he said. 'I went to the local museum - and experts there quite literally jumped for joy, and quite high.'

Speaking exclusively to The Siberian Times, Dr Pavel German, researcher at the Institute of Human Ecology, Kemerovo, who investigated the 2014 find with colleague Professor Vladimir Bobrov, said: 'We can say that this figurine is unique, as nothing identical has been found so far.

'This is the other reason, why the figurine is unique. We argue that is was a god or a spirit.'

The experts believe the figurine is from the ancient Okunev culture 'judging by the style'. But recent discoveries at an Okunev site some 300 kilometres northwest have led to a new theory about this river find.

Eight horn figurines were found at Lake Itkol in Khakassia which have been described as akin to modern-day children's rattles but with the purpose of fending off evil spirits. They were disciovered in the grave of a baby less than a year old at death.

While far from identical, they are said to be stylistically similar to the fisherman's pagan god, which is now on display at Tisul History Museum.

'Our figurine shows a resemblance to those found in child burials at Itkol Lake,' said Dr German. 'When we undertook our research we did not know about the Itkol figurines. Yet while there is a resemblance between them, they are not completely similar.'