Tisul (Russie) :Pagan God Confirmed as Being up to 4,200 Years-old

For now it remains a mystery how the ferocious find came to be in the river.

Eight horn figurines were found at Lake Itkol in Khakassia some 300 kilometres northwest have led to a new theory about this river find. Pictures: Andrey Polyakov & Yuri Esin, The Siberian Times

'The find could got into the water due to different circumstances, among them - the destruction of an ancient child's burial,' said Dr German. 'The figurine was found in a local river, and we went to the site, hoping there would be more (archeological items), but sadly we had no luck.'

He added: 'It is hard to tie this figurine to specific Okunev settlements or burials. The closest known settlement from the Okunev culture is  located (underwater) in the modern Tambarskoye Reservoir, 10 kilometres from where the figurine was found.'

The find was made upstream of this submerged archeological site. The figurine is made of antler and 'lines on its head depict the hairs. And on the back  there is an ornament which resembles scale. We suppose that it depicts a cape or mantle made of scale.'

It is unclear if it is fish or snake scale, possibly relating to the Lower World in the belief system of this ancient culture.

The Kemerovo object also shows signs that it might have been attached to a tree or perhaps to a baby's cot. 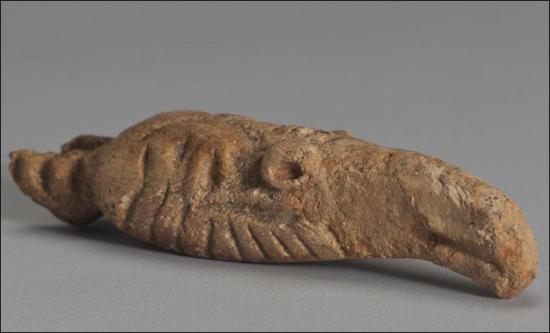 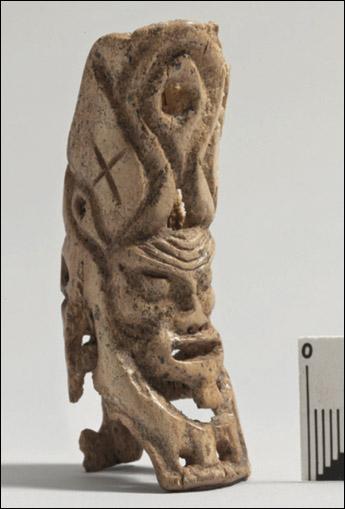 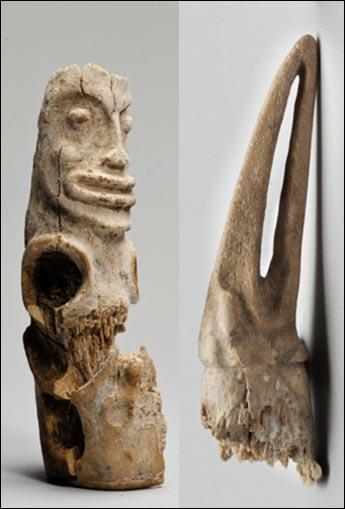 While far from identical, Itkol figurines are said to be stylistically similar to the fisherman's pagan god. Pictures: Andrey Polyakov & Yuri Esin

'There is a hole drilled in the figurine,' he said. 'We found a small wooden stick, a  twig, inside it.' So another theory is that 'the figurine was fixed on a tree branch and at some point it broke, with the small twig left embedded in it'.

Museum guide Ekaterina Vambrikova said: 'It is true miracle that Nikolay Tarasov found it. We are very proud that the figurine made by legendary Okunevs is in the collection of our museum.

'It is one of the most significant archaeological exhibit in our collection. It is on display now and we welcome people to come to us and see it. We think that this figurine may depict one of the gods or sprits in which Okunevs believed. It looks a little scary but fascinating, and our visitors love to see it.

'We heard that the scientists from St Petersburg have found some similar figurines in the grave of the baby (at Lake Itkol) possibly adorning the cradle. So perhaps our figurine was also this kind of such an adornment.'