Apart from the reductions of scale and three-dimensional representation of any object, the moulding of the human figure itself involves the most complex parameters. The  practice of forming a small image of the self “in one’s own image”, especially in three dimensions, presents the potter with a multitude of difficulties regarding the clarity of the rendition. Independent of his technical skills and the conventions of the art he practices, the maker’s efforts potentially echo deeper cultural values to do with the human form, of which he is the conveyor. His intentions in each case reveal the codes or conventions of anthropomorphism, as they evolve in every cultural phase of the Minoan civilisation. If there were indeed many centres of production of the figurines, as the Vrysinas assemblage indicates, whether the makers were also the users of the figurines or whether they were specialised craftsmen, it is worth searching for possible synchronicities that might arise from the multitude of pottery traditions of the site.

The head, and especially the rendition of the facial features, indicates precisely this variety. 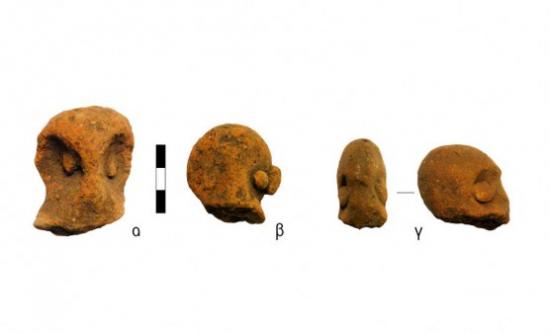 In the examples in figure 5, the three heads, derived from the early pottery traditions of the sanctuary, not only demonstrate alternative means of portraying these characteristics, but also reveal the particularities of the potter’s art at the largest known peak sanctuary in West Crete, compared to corresponding sites in the central and eastern part of the island. But apart from the abstractional conventions of each style, the faces also reveal an underlying hybridism, or even similarities to zoomorphic characteristics – or, rather, to characteristics of mixed human-animal beings.

The plethora of humanoid beings with bird or animal heads depicted both in seal-carving and in other arts of the Protopalatial and Neopalatial periods, bears witness to the incorporation of these beings into the imaginary world of Minoan culture. The archaeologists who attempted to make a selection from the huge mass of fragments of animal and human figurines discovered at the Vrysinas peak sanctuary, were faced with the task of sorting heads that could not be placed with the animals but were by no means definitely human. 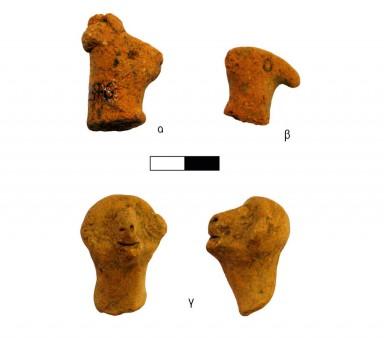 Thus, among the fragments of human figurines were found griffins’ and birds’ heads (fig. 6a, b), and other monstrous heads that further highlighted the questions surrounding the underlying hybridism of the human heads. Moreover, the detailed observation and description of the fragments led to the identification of an ape’s head, the first known clay figurine of an ape to be discovered at a mountain-edge site (fig. 6c). The skilful naturalistic rendition of the various features of the muzzle and the rest of the head made the identification certain despite the original doubts.

“Distinctive features” of the body: the human body and its cultural elements

The clothing that covers the human body and the accessories of all kinds that accompany it, do not just meet practical or decorative needs but also bestow cultural meaning and social signification on it. It has been stressed that the attributes borne on the body “lend distinction” to the forms of the clay figurines from Minoan peak sanctuaries, raising the question of image and display among contemporary people. The Vrysinas figurines do not present a variety of elements worn on the body, but they are displayed in a wide range of ways.

Head coverings predominantly comprise the pointed cap (fig. 7a), and many variations on the conical cap (fig. 7b). The cap is sometimes confused with a pointed top of the head, presumably indicating a topknot (krobylos) (fig. 7c), while in rare cases the hair and hat are mingled together (fig. 8d), a feature observed in figurines from other peak sanctuaries.

Hairstyles with locks of hair present a wider variety. The size and form of the hair is particularly significant in the identification of the figure, even indicating the person’s age. Vrysinas has produced a range of styles, from shaven heads with one or more locks of hair (fig. 8a), or a clump of short curls on the top of the head (fig. 8b), to particularly complicated hairstyles with symmetrically arranged locks (fig. 8c).

The delible paint and the flaking of the fine crust of the colours do not permit an in-depth investigation of the quantity of jewellery that would probably have been painted on the figurines. Of the very few pieces of jewellery rendered in plastic relief, we note the earrings with small applied discs, which are sometimes confused with the auricles, and a very few examples of necklaces (fig. 9). 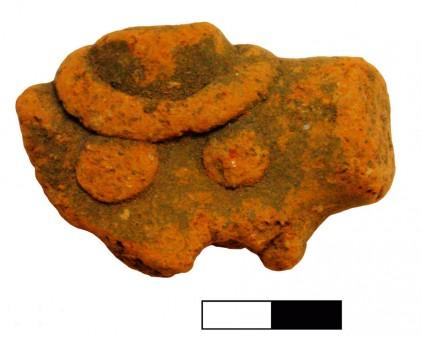 The female bodice (fig. 10a– rear view) – with an impressively high peak at the back of the neck which is obviously stressed particularly – is one of the few indications of dress to be safely dated to the Protopalatial period. 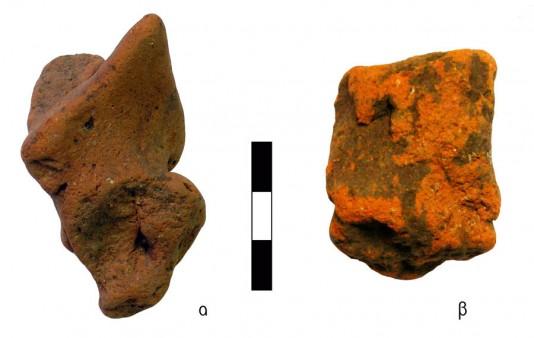