The Sterkfontein caves. Located about 23 miles northwest of Johannesburg, South Africa, in what has been called the Cradle of Humankind area, these limestone caves have yielded a number of history-making fossil remains related to early human evolution. Here, in 1947, the famous adult female Australopithecine skull of 'Mrs. Ples" was discovered by Robert Broom.Mike Peel, Wikimedia Commons

Sterkfontein Caves—world famous for their fossil and stone tool finds bearing on human origins, continue to make human evolution history with recent research on the dating of one iconic hominid fossil skeleton and an artifact bearing on humankind’s earliest known stone tool industry.
By applying new dating technologies, an international team of scientists from the University of Witwatersrand in South Africa, Purdue University in the U.S., the French National Institute for Preventive Archaeological Research (INRAP) in France, and the University of Brunswick in Canada, have produced new dates that effectively clear up the ongoing age uncertainty or controversy on the famous Little Foot skeleton and Oldowan tools found in the Sterkfontein Caves years before.

“Little Foot” is the nickname given to a nearly complete Australopithecus, or proto-human, fossilized skeleton found in the 1990’s by Professor Ron Clarke of the University of the Witwatersrand in the Sterkfontein cave system. Assigning it to a new species he calledAustralopithecus prometheus, Clarke has been painstakingly excavating it over the years from the hard, cement-like breccia encasing it within the caves. Its dating by various dating methodologies at different times have yielded significantly differing dates, causing confusion and skepticism within the scholarly world regarding its true age. The efforts have been in part complicated by the dating of flowstones within the deposits that have shown young ages, in contrast to the surrounding deposits, which have shown much older dates.

New progress was made in dispelling the uncertainty when, in 2014, Dr. Laurent Bruxelles of INRAP, Clarke, and colleagues released a map of the Sterkfontein caves sediment stratigraphy that “showed beyond doubt that the dated (2.2 My) flowstones had formed within voids opened by collapse of the cave sediments.”* Because the flowstones were observed to have intrusively separated parts of the skeleton itself within its sediment context, “it opens the possibility that the sediment and the skeleton within it could be far older than the 2.2 million year old flowstones.”*

To more precisely and reliably date the sediments, the researchers applied two major new advancements in dating methodology, one of which was a technology first developed and applied in mid-2014 at Purdue University’s PRIME lab, an accelerator mass spectrometry facility directed by Professor Marc Caffee. The results, considered more precise and reliable than any to date, were eye-opening—Little Foot is 3.67 million years old, with a margin of uncertainty of .16 million years.

The implications are significant. This meant that Little Foot lived at about the same time as another, well-known Australopithecine species, known as Australopithicus afarensis, time-correspondent fossil specimens of which were found at Laetoli in Tanzania and Woranso-Mille in Ethiopia. Little Foot, however, differed from afarensis in its morphology, with similarities to the flat-faced Paranthropus species with its bulbous cusped cheek-teeth. It also differed from another well-known Australopithecine species called Australopithecus africanus, whose fossils were also found at Sterkfontein, and who was generally smaller. According to the scientists, Little Foot, or Australopithecus prometheus, “poses new questions about the diversity, geographic spread, and relationships of early hominid species in Africa.”* 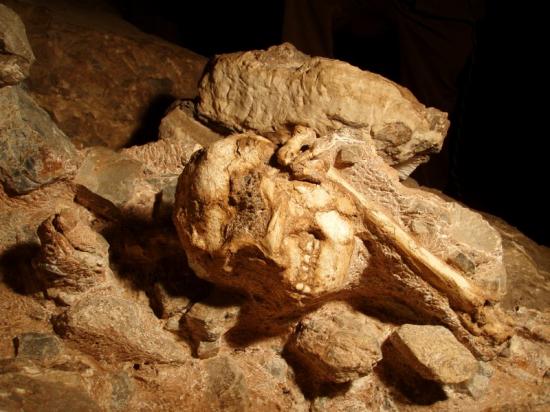 Little Foot as situated (in situ) within the Sterkfontein Caves. It has since been removed from the cave context and brought into the lab. Courtesy University of the Witwatersrand

The research team also conducted tests on higher-level sediments that contained a quartzmanuport, (an Oldowan-type cobble that was transported into the site by hominids). Oldowan is considered the oldest known simple stone tool industry. Based on the new sediment dating, the manuport was about 2.18 million years old, with a margin of uncertainty of .21 million years, making it, and the Oldowan stone tools found at the same level in the caves, the same age as Oldowan tools found at other sites in South Africa. According to the researchers, it “shows that South Africa’s Cradle of Humankind was home to tool-making hominids by 2 million years ago or earlier……a much earlier age for tool-bearing hominids than previously anticipated in this part of Africa.”*

Who made these stone tools?

Likely not Little Foot, say most scholars, as the Oldowan tools were found at a higher level within the sediment stratigraphy. Many scientists suggest that the tools were made by an early Homo (human line) species, such as Homo habilis, fossils of which have been dated from various locations in East and South Africa between 2.4 and 1.8 million years ago. 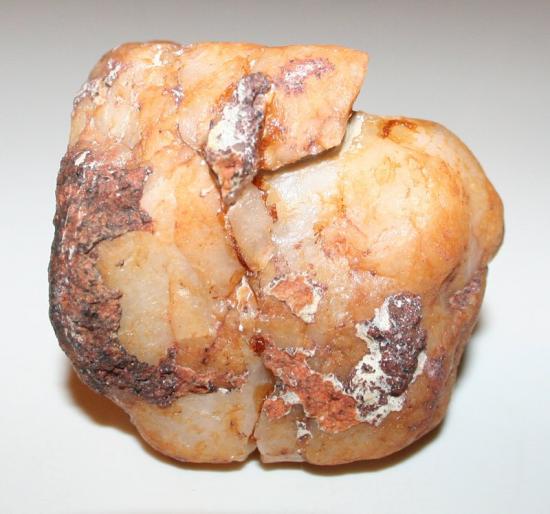 The dated quartz Oldowan cobble, a manuport from nearby gravels. Courtesy University of the Witwatersrand

Artifacts of the Oldowan. Courtesy University of the Witwatersrand

*An Update on Research at Sterkfontein: Dating of the Little Foot skeleton and the Oldowan artefacts, press release from the University of the Witwatersrand, Johannesburg, Soth Africa