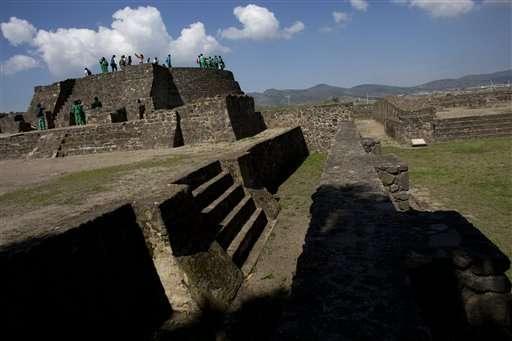 Students stand on a temple at the Zultepec-Tecoaque archeological site in Tlaxcala state, Mexico Thursday, Oct. 8, 2015. New excavations here, the site of one of the Spanish conquistadors' worst defeats in Mexico, are yielding new evidence about what happened when two cultures clashed, and the native Mexicans, at least temporarily, were in control. (AP Photo/Rebecca Blackwell)
It was one of the worst defeats in one of history's most dramatic conquests: Only a year after Hernan Cortes landed in Mexico, hundreds of people in a Spanish-led convey were captured, sacrificed and apparently eaten.
Excavations at a site just east of Mexico City are yielding dramatic new details about that moment when two cultures clashed—and the native defenders, at least temporarily, were in control.

Faced with strange invaders accompanied by unknown animals, the inhabitants of an Aztec-allied town reacted with apparent amazement when they captured the convoy of about 15 Spaniards, 45 foot soldiers who included Cubans of African and Indian descent, women and 350 Indian allies of the Spaniards, including Mayas and other groups.

Artifacts found at the Zultepec-Tecoaque ruin site, show the inhabitants carved clay figurines of the unfamiliar races with their strange features, or forced the captives to carve them. They then symbolically decapitated the figurines.

"We have figurines of blacks, of Europeans, that were then intentionally decapitated," said Enrique Martinez, the government archaeologist leading this year's round of excavations at the site, where explorations began in the 1990s.

Later, those in the convoy were apparently sacrificed and eaten by the townsfolk known as Texcocanos or Acolhuas .

The convoy was comprised of people sent from Cuba in a second expedition a year after Cortes' initial landing in 1519 and they were heading to the Aztec capital with supplies and the conquerors' possessions. The ethnicity and gender of those in the convoy were determined from their skull features.

Some place the number of people in the group as high as 550. Cortes had been forced to leave the convoy on its own while trying to rescue his troops from an uprising in what is now Mexico City.

Members of the captured convoy were held prisoner in door-less cells, where they were fed over six months. Little by little, the town sacrificed, and apparently ate, the horses, men and women. 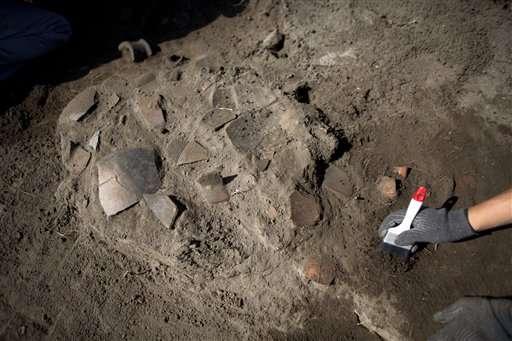 A worker clears the area around broken pottery lying in situ at the Zultepec-Tecoaque archeological site in Tlaxcala state, Mexico, Thursday, Oct. 8, 2015. The inhabitants of the Aztec-allied town are known as Texcocanos or Acolhuas. (AP Photo/Rebecca Blackwell)
"The aim of the sacrifices ... was to ask the gods for protection from the strange interlopers," the National Institute of Anthropology and History said in a statement.

But pigs brought by the Spaniards for food were apparently viewed with such suspicion that they were killed whole and left uneaten. "The pigs were sacrificed and hidden in a well, but there is no evidence that they were cooked," Martinez said.

In contrast, the skeletons of the captured Europeans were torn apart and bore cut marks indicating the meat was removed from the bones.

Some of the first European women to set foot in Mexico weren't treated chivalrously. Along with the men, they were apparently kept in the walled-in spaces for months, with food tossed in, perhaps through small windows. A find last week indicates one woman was sacrificed in the town plaza, dismembered, and then had the skull of a 1-year-old child, who apparently was sacrificed as well, placed in her pelvis, for reasons that were probably symbolic and remain unclear.

While Spaniards later wrote accounts of the massacre that occurred in 1520, a dark year for the conquistadors, archaeologists are finding things they didn't mention.

"The interesting part is that the historical sources (mainly Spanish chroniclers) didn't mention the presence of women in the convoy, and here we have a large presence of women" among remains excavated so far, Martinez said.

Fifty women and about 10 children are estimated to have been in the convoy, and all were killed.

The Spaniards' goods were, on the whole, treated indifferently. A prized and elaborate majolica plate from Europe was tossed into the wells as were the Spaniards' jewelry and their spurs and stirrups, which were of no use to the Indians. A horse's rib bone, however, was prized and carved into a musical instrument. 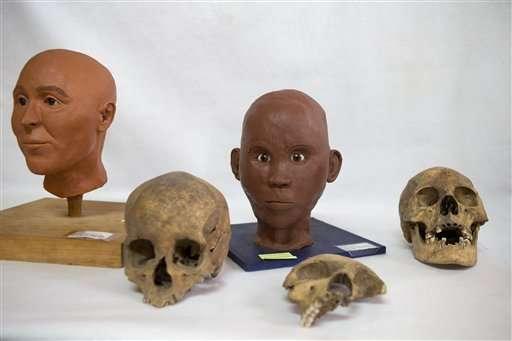 The skull of a Spaniard, bottom left, a child, center, and a person of African heritage sit alongside models of what a Spanish conquistador and a person of mixed Amerindian and African descent may have looked like, at the Zultepec-Tecoaque archeological site in Tlaxcala state, Mexico, Thursday, Oct. 8, 2015. Faced with the invaders accompanied by unknown animal species, the inhabitants of the Aztec-allied town just east of Mexico City captured a convoy of about 15 Spaniards, 45 foot-soldiers—including Cubans of African and Indian descent—women, and 350 Indian allies of the Spaniards, including Mayas and other groups. (AP Photo/Rebecca Blackwell)
"This seems to be even more spectacular information about an important event of the Conquest ... about which we have very little historical documentation," wrote University of Florida archaeologist Susan Gillespie, who was not involved in the project. "It does add new dimensions to the acts of resistance of the indigenous people. There is the wrong-headed notion that many of them simply capitulated to the more superior European forces. But it is the victors who write the histories of war."

The bloodiness of the brief chapter of dominance by the indigenous group is sealed in the second name of the Zultepec ruin site, Tecoaque, which means "the place where they ate them" in Nahuatl, the Aztec language.

When Cortes' soldiers returned to the town, they found that townspeople had strung the severed heads of captured Spaniards on a wooden "skull rack" next to those of their horses, leading some to think the Indians believed that horse and rider were one beast.

When Cortes learned what happened to his followers, he dispatched a punitive expedition of troops to destroy the town, setting into motion a chain of events that actually helped preserve it. 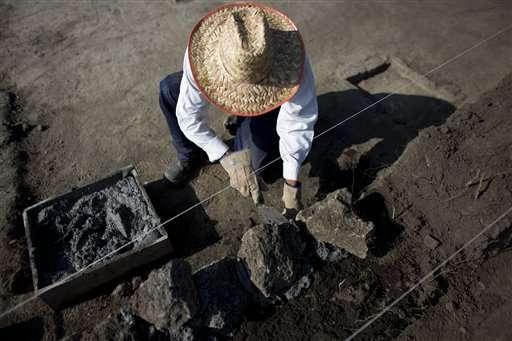 A worker rebuilds a toppled wall using rocks found inside the Zultepec-Tecoaque archeological zone in Tlaxcala state, Mexico, Thursday, Oct. 8, 2015. Explorations of the Aztec-allied town began in the 1990s. (AP Photo/Rebecca Blackwell)
The inhabitants tried to hide all remains of the Spaniards by tossing them in shallow wells and abandoned the town.

"They heard that he (Cortes) was coming for them, and what they did was hide everything. If they hadn't done that, we wouldn't have found these things," Martinez said.

Cortes went on to conquer the Aztec capital in 1521. 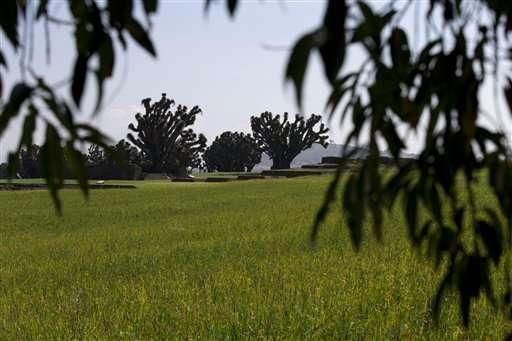 A field of oats, believed to be covering temples and structures, grows next to excavated sections of the Zultepec-Tecoaque archeological site in Tlaxcala state, Mexico, Thursday, Oct. 8, 2015. While Spaniards later wrote accounts of a massacre that occurred here in 1520, archaeologists are finding things they didn't mention, like the presence of women and children in the conquistadors' convoy. (AP Photo/Rebecca Blackwell)