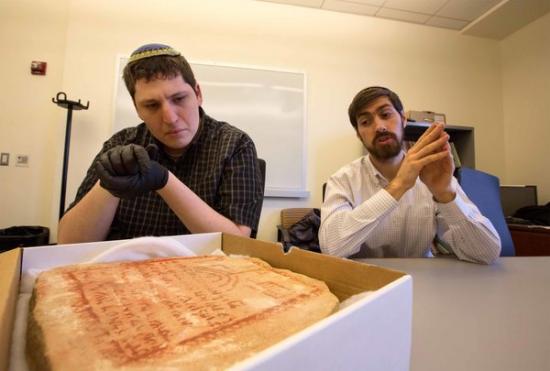 Ellie Schwartz and Mordechai Friedman, students at Yeshiva University, with a tombstone they initially worked on only from photographs.

They figured out her first name, but not her father’s. They know where and when she died, but not her age or the cause of death. They could not tell whether she was married.

This is a detective story, but not the ripped-from-the-headlines kind. The woman died more than 1,600 years ago, in what is now Jordan. The detectives are a few students at Yeshiva University in Upper Manhattan and a professor who is sometimes called the Jewish Robert Langdon, referring to the fictional Harvard professor of iconology in the Dan Brown books and the movie “The Da Vinci Code.”

All they had to go on was the woman’s tombstone. And at first, they did not even have that, just photographs of it.

Here are the facts of the case:

In March 2012, the professor, Steven Fine, who is also the director of Yeshiva’s Center for Israel Studies, wrote an article for the magazine Biblical Archaeology Review about Jewish tombstones in the ancient city of Zoar, which most scholars say was on the Dead Sea. It was such an oasis, according to one account, that a sixth-century mapmaker drew a grove of palm trees as a symbol for it.

Dr. Fine soon heard from one of the magazine’s readers, the Rev. Carl Morgan of Woodland United Fellowship, a church in Woodland, Calif.

Pastor Morgan, who also has a doctorate in archaeology, emailed a tantalizing photograph: an image of a tombstone like the ones Dr. Fine had discussed in his article. Pastor Morgan said it was in the collection of the Woodland Museum of Biblical Archaeology, which occupies part of the church’s campus, about 20 miles from Sacramento. A private collector had given it to the museum, Pastor Morgan said.

“It had not been translated,” he recalled in a recent telephone interview. “I knew Dr. Fine could translate it.”

Dr. Fine showed the photo to students in an undergraduate Talmudic archaeology course, and they decided to spend a semester translating the Aramaic inscriptions and learning everything they could about who the woman was.

“We spent more time deciphering this than the people who made this,” said Mordechai Friedman, a freshman. “That was one hour. This was 15 or 20, each letter, trying to figure out what they mean. Many times, we had the first letter of a word and the last letter and we had lists of words, and when you know this word is possible, you think you can see it. But Professor Fine told me you can’t always do that. You have to look at what’s actually there.”

The tombstone, which is made of sandstone and is roughly the size of a legal pad, became their window to an ancient world centered in Zoar. Dr. Fine said that Zoar was “a major Christian city, a biblical pilgrimage city,” but that it had a sizable Jewish population. Hershel Shanks, the founder and editor of Biblical Archaeology Review and an influential scholarly figure on the Dead Sea Scrolls, agreed that such a tombstone “represents a Jewish community that thrived there.”

The students knew that Jewish tombstones from Zoar had been discovered in the early 20th century; Dr. Fine said 30 to 40 had been documented. Far more Christian tombstones have been found, and he said there were differences between the ways Christians and Jews remembered their dead. The Christian tombstones were inscribed in Greek, and most carried common Christian symbols — a cross, a fish or birds. Dr. Fine said the lettering on the Jewish ones was in a form of Aramaic that only Jews, not Christians, were taught to read. The symbols, as might be expected, included menorahs.

From the beginning, the Yeshiva students were confident they could make sense of the Aramaic inscriptions; Talmudic Aramaic is virtually the same as the Aramaic on the tombstone. They also know Hebrew. Mr. Friedman said the first few words were straightforward, and Ellie Schwartz, a senior, recited them: “ ‘Here rests the soul of Sa’adah, daughter of something.’ We don’t know the ‘something.’ ”

Going by the format of other ancient tombstones, they felt certain the missing word was the name of the woman’s father and wondered if it was Phineas, but they said they could not be sure. “We have the P,” Dr. Fine said. “We thought there was an N, but we’re stuck because whatever it is, it’s been scratched away. You get to the point where ‘I can’t know’ may be the most learned answer you can give.”

If the father’s name was elusive, so was another basic fact about the woman, whose name means “divine help.”

“They don’t mention her age,” Mr. Friedman said. Dr. Fine said Christian tombstones from that area carried ages, but Jewish tombstones did not. That was simply the custom of the day, he said.

But the students could date the stone, based on the parallel dating systems inscribed on it. One referred to the Temple in Jerusalem, destroyed by the Romans in the year 70. (That system was used by Jews in Greece until World War II, Dr. Fine said; the last place the system was used, he said, was Corfu, before the Nazis rounded up the Jews who lived there and sent them to Auschwitz.) The other system was based on the number seven. By comparing the two systems, they could say with certainty that she died 362 years after the destruction of the temple. 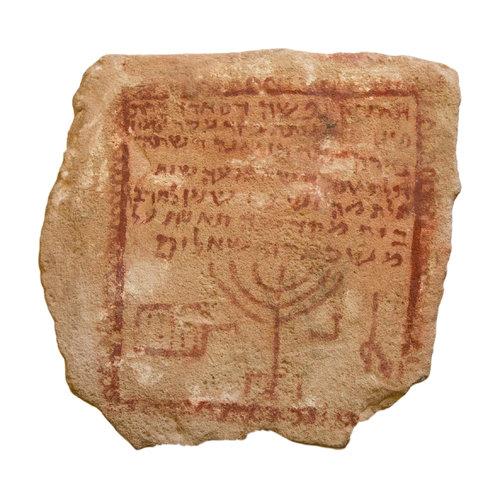 Students in an undergraduate Talmudic archaeology course spent a semester translating the Aramaic inscriptions on the woman's tombstone and learning everything they could about her. James Estrin/The New York Times

And then there were the symbols painted on the tombstone. Mr. Schwartz said the group assumed one was the Ten Commandments, because in the photographs from the museum, it looked like a tablet with writing on it. Dr. Fine knew better. “It’s an incense shovel,” he said — a symbol of ceremonies in a temple.

That was, in part, because of the students’ work on dating the memorial stone. “Four twenty-nine, 430, that’s beyond what we deal with here,” Pastor Morgan said. “That’s recent history for our purposes.”

Dr. Fine recalled their conversation. “He said, ‘This is a Talmudic object, it should be at Yeshiva.’ I said, ‘O.K.’ He said, ‘Do you have any money?’ I said no” — a similar tombstone offered for sale was listed for $2,500 to $3,000 in Israel, Dr. Fine said. “He said, ‘Do you have anything to trade?’ I said no. He said, ‘Why don’t you come out and give a lecture and take it home?’ I did everything I could to convince him that he shouldn’t give it to us. He kept saying, ‘No, no, this is something that should be with you.’ So I went there.”

Pastor Morgan said he was happy with the bargain he struck: If Dr. Fine would give a lecture at Woodland, Yeshiva could have the tombstone for its museum.

“The stone itself is not really of a biblical period,” Pastor Morgan said. “That’s why I didn’t really need it here.”

“We are not equipped here to preserve sandstone with paint on it, which can deteriorate pretty quick,” he added. “We can handle ceramics, I can treat bronze, but for sandstone I need to go somewhere else. So I wanted it to go somewhere where it could be appreciated and where they would take care of it.”

Dr. Fine gave not one but two talks at the museum in October, and then he flew to New York with the tombstone wrapped, carefully, in what looked like a pizza box.

But the student detectives — who, like the forensics experts on the police procedurals on television, wear special gloves to handle the tombstone — have not declared the case closed. Now that they are able to study the stone itself, not just the photographs, they hope to unravel more about who Sa’adah was. They are close to pinning down the month in which she died.

“The fact we know this woman existed at all,” Mr. Schwartz said, “is a miracle.”