New Achievements of 2011 Excavation to the Zhoujiazhuang Site in Jiang County, Shanxi Province

The Zhoujiazhuang site is located between Zhoujiazhuang village and Cuicun village in Hengshui Township Jiang county, Shanxi province. As a large-sized ruin, it covers an area of about 5 million square meters, including ruins mainly from the Longshan culture and some from the Yangshao culture, the second phase of Miaodigou Culture, Erlitou Culture, Erligang Culture and Eastern Zhou periods. Basing on previous excavations, in spring 2011 a large scale excavation was carried out to a cemetery from the Longshan culture at the east-central area of the site.

The excavation last nearly two months from middle March to late May. Totally eleven trial pits covering an area of 1,100 square meters have been excavated. Most achievements are remains from the Longshan period and some are from the Eastern Zhou period.

Eastern Zhou remains include ash pits, house foundations and urn-coffin burials. Most of them are from the Warring States period and few from the late Spring and Autumn period. Ash pits are in bag-shape, rounded-bottomed or irregular shapes. In house sites there only remain traces of the white Plaster ground. The urn-coffin burials are just the same as those finds in the typical Jin culture. Unearthed objects include ceramics, stone and bone tools. The overall cultural appearance is very similar with that of the Houma metallurgical site. 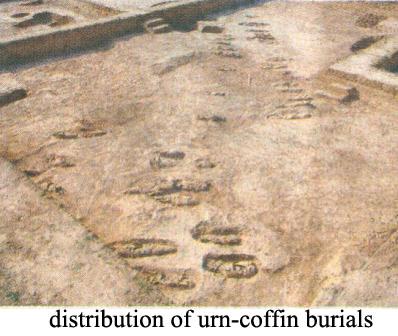 Remains from the Longshan period include trenches, house foundations, pottery kilns, ash pits and cemeteries. A trench 10 m wide at the lowest level of the site is considered to be the earliest. Its length and alignment is still not clear. After the trench is abandoned and filled up, its upper level and surrounding regions are overlapped by many pottery kilns, houses and various ash pits. There are 5 kilns within the excavation area with some large-sized ash pits in the vicinity, which could be sources of pottery clay. Totally 10 small house foundations are scattered in the site, each measuring less than 10 square meters in area. There are two forms: the subterranean type and the semi-subterranean type, both with smooth and flat white Plaster ground. The former could be dated to an earlier age. There are various types of ash pits including bag-shaped, vertical-walled, pot-bottomed-shaped and irregular shaped pits. They function as caches or rubbish pits and, some are remains of pottery-clay digging.

As the main task of this excavation, cemeteries appear with the largest number and two types including shaft tombs of adults and urn-coffin burials of children. As by far recognized, all tombs are arranged in more than 10 lines and in southeast-northwest direction. There are 64 urn-burials totally. Some of them mix between lines of pit tombs, for example, among the three lines of pit tombs in the middle of the cemetery nearly 40 urn-coffin burials are densely settled. In the urn-coffin burials coffins usually are covered ceramic Lis and few of them are jars with angular shoulder. Larger ones about 1 meter in length contain complete children skeletons. The excavation uncovers 58 shaft tombs, including 1 large-sized, 5 middle-sized and 52 small-sized. The small-sized tombs have length of only a single body. If slight larger, they usually remain traces of wooden planks. The middle-sized tombs, usually over 2 m long and over 1 m wide, often has a platform (Ercengtai) and wooden planks remain. All cemeteries are arranged in northeast-southwest direction with almost all heads toward southwest and only few toward northeast. All of them are buried in extended supine position. No burial object is seen in all cemeteries. 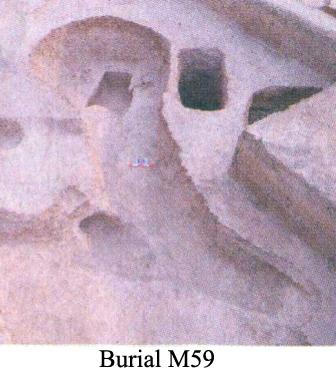 Tomb M59 is in large size and possesses a unique tadpole shape. Lying in southwest-northeast direction, it is composed of two parts, the chamber and the passage, measuring wholly 8 m in length, 3 m in width and 1.62 m in depth at the most. The chamber is in pentagon shape, with a rectangular tomb pit in the center. The pit contains remains of wooden coffin planks in the south end and a skeleton which is seriously dismembered. The skull, limbs and spine are overlapped with each other. In the south of the tomb over the earthen platform there placed a dismembered skeleton with the upper half on the east side and the lower part on the west, seeming like a human sacrifice. Although in large size and a unique shape, it contains no burial objects. Furthermore, the tomb occupant is dismembered and digging traces could be seen on the two sides of the tomb pits, which indicates the tomb has suffered robbery short after it was built. The middle- and small-sized tombs in its vicinity remain few human bones or even nothing, indicative of secondary burials or serious intentional damages, which probably result from fierce conflicts between different groups.

The excavation of this season provides us rich knowledge on the settlement interior structure of the Zhoujiazhuang site from the Longshan period. Firstly, the time sequence formed by various overlapped remains demonstrates a transition process of the site from settlements to cemeteries, indicating that a huge change has happened. Secondly, some characteristics of the site are quite important. It is a large sized cemetery from the Longshan period featuring adult shaft tombs mixed with child urn-coffin burials, which is very rare at its time. The phenomenon of cemeteries arranged in rows, tombs of children and adult appeared in close number and coexistence of several different types of adult tombs provides direct materials for studying the social structure, child death rate, population composition and social stratification of that time. Furthermore, in the Central Plain the large sized cemetery from the Longshan period is very rare. The Zhoujiazhuang site, with its well-arranged, large sized and well-preserved cemeteries, is of great significance for studying the burial practices and social developments of the Longshan period in southern Shanxi Province and even in the whole Central Plain.     （Translator：Tong Tao）