From August, 2013 to October, 2014, salvage excavation of Zhangjiadun site has been carried out by Zhejiang Provincial Institute of Archaeology and Cultural Relics, covering an area of 4,600 square meters. 10 house foundations, 20 ash pits and 3 ash ditches of Majiabang culture (5000 BC--4000 BC), 2 tombs of Songze culture (4000BC～3000BC), 5 tombs, 21 ash pits and one ash ditch of Liangzhu culture (3300 BC--2200 BC), associated with 1 tomb from Warring States period, 2 kilns from Tang Dynasty as well as 2 wells from Song dynasty have been cleared.

Zhangjiadun is a small hill in the south of Liangzhu site groups in Zhejiang province. According to this season’s excavation, the remains are spread out on the east and south slopes of Zhangjiadun hill as fan-shape. The cultural deposits mainly belong to Majiabang and Liangzhu cultures with a total area of about 10,000 square meters.

Majiabang cultural deposit (5000 BC--4000 BC) is relatively thick, about 60 cm. It can be divided into 4 layers. Plenty of pottery shards from Majiabang culture are unearthed, including recognized shapes like conical tripod of cauldrons (ding-vessels), trumpet-shaped dou-plates, bull-nose-shaped vessel ears, fu-cauldrons with round bottom and waist brim, vessel stands, gui-vessels in unusual shape, cups with handle, small jars with flat bottom and so on. Besides, there are also small amount of stone artifacts such as giant stone rings, stone adzes, stone axes, grindstones and etc. as well as some jade ear-ring. One of the jade ear-ring is broken into 3 parts and can be refitted by drilling holes on them.

The most significant achievement of this season is the discovery of settlement surrounded by a ditch of Majiabang culture. They are all located within ditch G4, the southern part of the site, including at least 10 building units consisting of more than 300 post holes. The diameters of post holes are varied, ranging from 15cm to 73cm and most of the depths are 20 to 40cm. Usually, they are placed around a circle or a rectangular shape so as to form basic planes of buildings, covering an area of 8-32 square meters. Besides, a multi-roomed square house is uncovered, about 150 square meters and facing the south. It might have eave corridor. Several post holes are discovered from the ditch directly on the south which might be pile foundation of the bridge on the ditch. 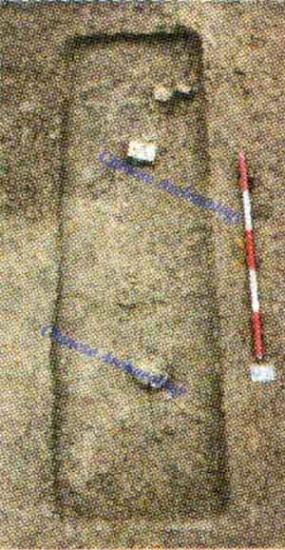 The deposit of Liangzhu culture (3300 BC--2200 BC) is only 20-30cm residue. Several pits filled with burnt earths are found in the layer. Right below them, 7 tombs of Songze and Liangzhu cultures are cleared. They might be a small part of a cemetery due to their rather ordinary customs and loose distribution. They are all shaft earthen pit tombs, mostly heading the north, 200-260cm long, 60-90cm wide and 6-25cm deep residue. Funeral furniture and skeletons are already rotten. However, there is (are) 1-7 burial gifts in a tomb. Pottery has ding-tripod cauldrons, dou-vessels, jars, basin and spindle whirls. Stone artifacts range from yue-broadaxes and adzes. In addition, there are awl-shaped jade ornaments, jade tubes and jade beads. 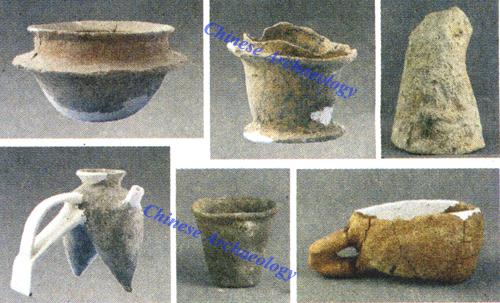 There are 4 curved ash ditches from different times found in the edge of the site which could drain away water down to ancient Liangzhu harbor from southwest to northeast alongside the landscape. G2 and G3 are about 60cm-wide, shallow ditches, while G1 and G4 are moats of Liangzhu culture and Majiabang culture with an average width of more than 3 m. Significantly, inside G4, in the edge of Majiabang cultural settlement, there are 3 piles of holes intensively distributed. The diameters range from 8-16cm and depths are about 20cm. The middle pile is 26.5cm long and only more than 1 m away from housing remains. By dissecting the holes, we can see that there should be posts with a sharp point standing in the holes. Thus far, it’s suggested that wooden fences are constructed inside the original moat. 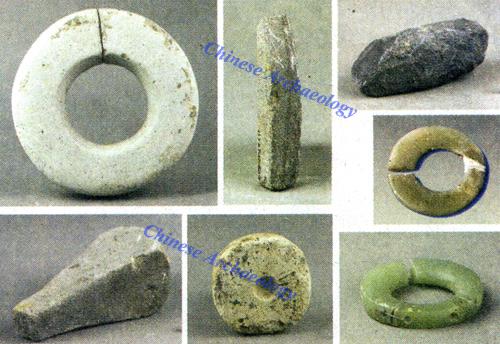 According to the excavation, it’s suggested that in the late period of Majiabang culture, villagers started to live on Zhangjiadun’s adret slope by building house with posts, digging moats, constructing fences as well as passages. Besides, irregular ash pits filled with daily-use wastes spread in the surrounding place. No burial of this period is uncovered.