Guojiamiao cemetery, covering an area of 1,200,000 square meters, is located at Wudian county, Zaoyang city, Hubei Province. It can be divided into two parts: Guojiamiao tomb group and Caomenwan tomb group. Looted tombs in Caomenwan group have been excavated by jointly archaeological team consisting of several institutes, such as Hebei Provincial Institute of Archaeological and Cultural Relics and Jingzhou Cultural Preservation Center so as to prevent Guojiamiao cemetery from damage and looting. Until the end of December, 2014, remains from Early Spring-Autumn period to Late Western Zhou period are cleared, including 29 tombs, 1 chariot pit as well as 2 horse pits. More 400 bronze vessels, almost 100 jade artifacts, over 50 pottery and more than 30 lacquer wooden artifacts are unearthed. So far, the excavation is undergoing.

M1 unearthed in this season is a rock-pit tomb with a single sloping passage, oriented from the east to the west. The passage is 11m long and 7.8m wide. The chamber is 11.3m long, 8.5m wide and 8m deep. They are almost the same with each other, having a rather unique funeral form in Spring and Autumn periods. Although it has been robbed, the wood of outer coffin is well-preserved, about 6m long and 5.6m wide. The inner coffin is also in good condition, in which the painted pictures and silk fabrics are still identifiable. According to preliminary judgment, this tomb should have several coffins. Although large bronze wares have been looted, plenty of weapons, chariots and harnesses ornaments, jades as well as lacquer wares are discovered. The discoveries of painted frames with wood carvings where chime bells and stone chimes were arranged are the first time in history. These frames contain various sizes of beams, posts and stands. Remarkably, the largest beam is about 4.5m long with circular carved dragon heads at both ends and changed phoenix-and-dragon decorations all over the whole body. Besides, there are a pair of large stands and a pair of small stands, both of which are heavily rotten. Among them, the larger ones have circular carved phoenix head and painted vertical scale patterns on part of the bodies, all quite vivid. Now M1 is still excavated. There will be more important discoveries to look forward. 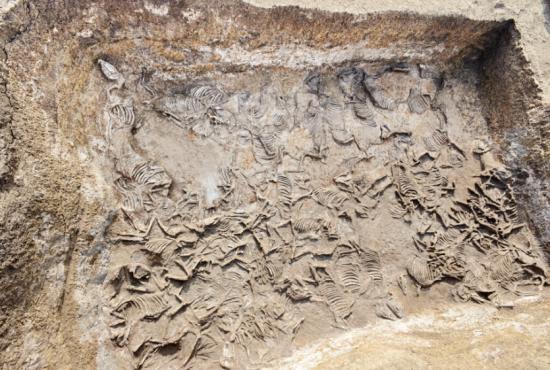 Remains of No.1 chariot pit

Chariot pit 1 and Horse pit 1 are accompany pits of tomb M1, situated at the west of M1 side by side from east to west. Chariot pit 1 is about 32.7m long, 4m wide, burying 28 chariots. These chariots are vertically arranged from the east to the west, which are quite different from those of Chu State. Chariots in the eastern part are relatively well-preserved with painted pictures and decorated with bronze components. No.1 horse pit is 9m long, 8m wide, 2m deep and contains 49 horses which are put in the pit out of order after they have been killed. 2 horse skulls are always found together which implies that mostly the chariot in the pit has 2 horses. The finds of No.1 Chariot Pit and No.1 Horse Pit provide vital important material for the research of chariot’s structure in Zeng State and its burial system.

Small-sized tombs with bronze sacrificial vessels are about 4m long, 2-3m wide and 2-5m deep. They always contain one outer-coffin and one inner-coffin. Most of the funeral goods put in the east of the outer-coffin have been looted. However, there are still lots of burial gifts being found. Among them, bronze sacrificial vessels are mainly Ding-cauldrons and Fu-vessels as well as burnished black pottery jars and pots and etc.. In most cases, one tomb only has one Ding-cauldron. During this season, several bronze vessels with inscription are unearthed, including 2 Ding-cauldrons with the inscription of Zengzi. Bronze weapons, chariots and harnesses ornaments are usually discovered between the outer-coffin and the inner-coffin, ranging from spear-heads, daggers, arrowheads, horse-bits, bridles, the bronze parts covered at each ends of chariot axle, bronze chair nails and so on. Jades are always found around the heads or chests of the deceased, including penannular jade rings, jade cong-tube, jade tubes, jade decorations, jade huang-ornaments and so on. In some occasion, there are round bronze waist decoration discovered in the waist. Besides, there are red ocher paving in the bottom of coffins. Both ends of coffin have grooves for wooden ties.

Besides, there are 3 small pottery tombs with an inner coffin, an outer coffin and a side niche. Potteries are found in the niche, including li-vessels, dou-plates with a stand, jars, pots and etc. These tombs are rather similar with that of ordinary people’s from Chu and Qin States in the early period of the Spring-Autumn period.

The discovery of 2 Zengzi ding-cauldrons this season furthermore confirms the conclusion that Guojiamiao cemetery is aristocrat cemetery of Zeng State. Moreover, the finds of No.1 large tomb along with associated chariot pit and horse pit fully demonstrate the relatively high rank of the cemetery which should be the king’s cemetery of the Zeng State from the late period of West Zhou to the early period of Spring and Autumn period so far.  (Translator: Ma Huanhuan)