Yur-Yakha III (Russie) : Medieval burials on Yamal peninsula may have been ritualistic sacrifices

The find of four graves from the 11th century site Yur-Yakha III are unlike anything else seen from this era in Yamal, say scientists. Two of the dead were young women aged around 18 to 20 and all had 'serious diseases'.

The burials were in a crouched position and there are suggestions that rituals, perhaps even sacrifices, were involved in the deaths of these nomads with significant health problems.

'For sure there are no similar medieval burials,' said senior researcher Andrey Plekhanov, of the archaeology department, Arctic Research Centre of the Yamalo-Nenets autonomous region.

'On Yamal, we have mainly found burials in which the dead are in an extended position. On the site of Yur-Yaha III the people are buried in a crouched position.' 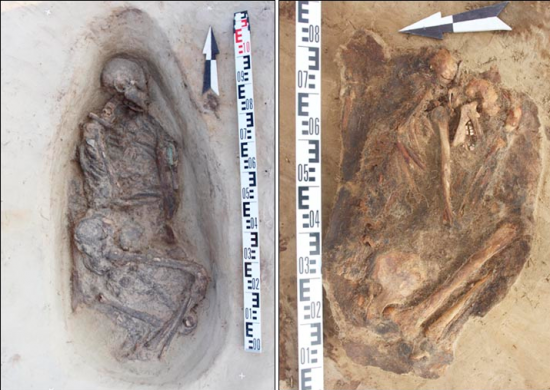 Male remains have the traces of fire. Two young women aged around 18 to 20 buried in foetal position.

They were in the foetal position, he said. 'Moreover, our examination showed that the man's body was set on fire after death. Such a ritual was not previously recorded in medieval necropolises  in the region.

'We can be sure that he did not die in the fire. His dead body was set to fire but not a very strong one. His bones remained almost intact, the fire damage mostly the soft tissues. At the moment we do not know why they were buried this way, nor the significance of this.'

Bronze bracelet with a bear image, a silver pendant, a temporal ring, a bronze pendant, a knife with a bronze handle, fragments of facial mask made of animal skin.
More excavations will be carried out here to see if further answers can be found. Three women and one man were buried in the medieval graves.

'It's hard to name all of their conditions, but for example - shoulder dislocation, teeth anomalies, sinusitis, post-partum trauma of the sacrum and many others'.

A man aged 45-to-50 suffered from hyperostosis - excessive growth of bone tissue. As a child, he had undergone 'strong physiological stress, obviously as a result of severe starvation or disease'.

A yangach (for removing snow from clothes) and a tanning scraper found in the burial.

Plekhanov said: 'It's hard to say if this was normal (for the period). The medical expert Evgenia Svyatova, who examined the skeletons said that the disorders were quite typical for that time, yet for four burials it is a very large number of diseases...

'These people lived in very harsh conditions, they were malnourished.'

The women were 151 cm and 147 cm tall respectively. Two of the graves were robbed many centuries ago, but in the others important finds were made.

Fragments of pottery from the funeral meal were also found. Picture: Maria Chernaya

One of the young women was buried with bronze bracelet with a bear image, a knife with a bronze handle, a yangach (for removing snow from clothes), a tanning scraper,  bronze and silver pendants, a temporal ring, kind of facial mask made of animal skin.

Fragments of pottery from the funeral meal were also found.

The other young woman too only an iron knife to her afterlife. She probably died after giving birth.