After an extensive excavation conducted from 2007 to 2010, a large amount of new archaeological data was retrieved from the Yuhui site. In order to facilitate researches and preservation of the site, the Institute of Archaeology Chinese Academy of Social Sciences (IACASS) had conducted the fifth excavation from March to June 2011 with new findings.

1.A huge artificial pits for earth taking was exposed The pits distribute in a 400 square meters area, scattering along the western part of the excavation area in various sizes and depths. Some of them were joined together. There were traces of digging tools in the bottom and surface of the pit. Each pit contained irregular alluvial soil, relatively large number of pottery sherd was identified and completed potteries were found occasionally. Judging from the excavated area, the formulation of the pit was directly related to the soil used in construction and pottery making. Those soil was within the pit for a while and there was a huge flooding in the area such that irregular surface was formed. The soil was also attached to those pottery, sherds, and stone tools.

2.Discovery of sacrificial pits (JSK6, JSK7 and JSK8) A number of artefacts and fragments were unearthed within the round bottom pits and there was an intention to dispose these artifacts in one layer. The shape and disposal style of JSK7 were different with a cross shape appeared on top of the pit. There were five artefacts’ combinations within the pit: Type 1 was formed with 6 artefacts (2 jars, 1 basin, 2 dings and 1 broken pottery artefact); Type 2 was formed with 7 artefacts (3 jars, 1 he, 1 basin and 2 broken pottery artefacts); Type 3 included one artifact (ding); Type 4 was formed with 4 artefats (2 dings and 2 broken pottery artefacts); Type 5 was combined with three artefacts (1 ding, 1 jar and 1 broken pottery artefacts). Characteristics of the pottery artefacts including 1: Simple typology mainly consisted of Ding, jar and pottery he. 2: Materials of these pottery were soft and individuals artifact can be seen from the pit. In addition, a number of polished stone tools were identified within the pit. Up until now, eight sacrificial pits were identified in these Area II. Artefacts were discovered in various locations, for instance, several completed artefacts were identified from vertical pits, a number of rounded bottom artefacts from different layers at the lower level of the pit, flat base artefacts from single shallow layer, flat artifact from single layer at the bottom of the pit and rounded bottom artefacts from single layer at the bottom of the pit. 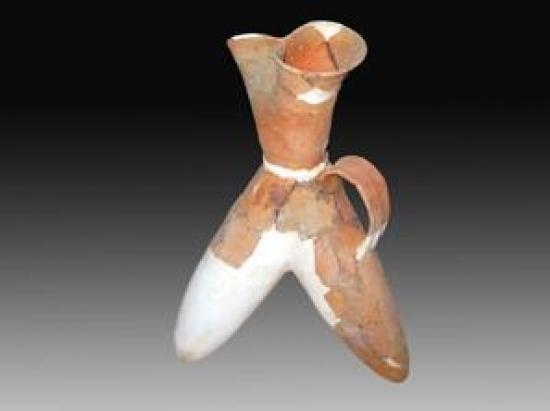 3.Discovery of a section of separation barrier The separation barrier was located in the southern edge of the pits extending from east to west. The length was around 10m and the width was around 0.11-0.13m. A ditch was identified during the excavation and the barrier was constructed in a form of ditch. The section of the wall was conical in shape with a steep slope on one side and a curved radial in the other side. The bottom part was sharp and no posthole could be found, which was not related to the construction. This feature can be regarded as a temporary separation facility. 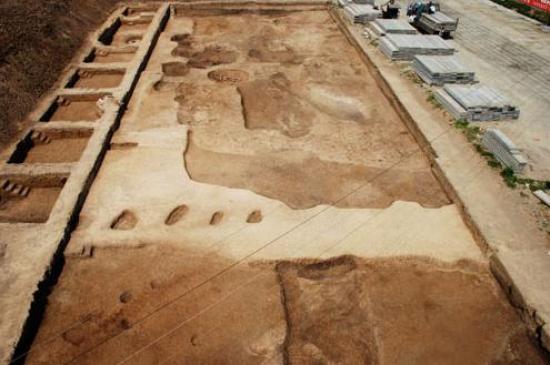 Based on the above analysis, altar from Area I was prominent for single usage and Area II(including Area III) not only for ritual activities (such as different types of sacrificial pits and trenches), but also related to other living activities (such as ash pits, ash trenches and other simple scaffolding construction). It is assumed that the altar from Area I was the precinct for ritual purpose with strict procedure and march in/out style. Features of Area II, to a large extent, were related to living or other issues with similar functions.  (Translated by Li Langlin)