The central Anatolian city of Yozgat has been one of the areas of archaeological excavations for many years. With the beginning of summer season, the city hosts archaeological teams from Turkey and the world. 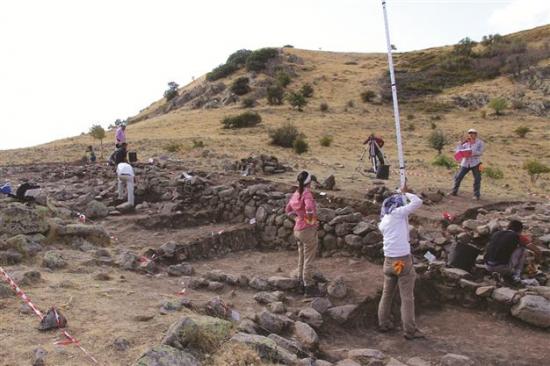 Yozgat’s other historical areas are once again hosting archaeological excavation teams from Turkey and the world.

Surface surveys and excavations that have been continuing in the central Anatolian province of Yozgat’s five different areas have been initiated once again this year, this time in three areas.

Yozgat Museum Directorate officials are working on the remains of a historic Roman bath in the Sarıkaya neighborhood, while foreign archaeologists are carrying out excavations in Çadırhöyük, which was home to five civilizations in history, and the Kerkenes mount, where the traces of the lost city of Pteria have been unearthed.

A team, led by Dr. Gregory McMahon of the American New Hampshire University, will continue working in Çadırhöyük, which is located near the district of Sorgun’s Peyniryemez village, until the middle of August.

The first surface survey started in Çadırhöyük in 1993 and permission for archaeological excavations was given in 1994. As a result of excavations there, artifacts from five different civilizations and five different ages, including the Copper, Bronze, Hittite, Hellenistic and Upper Byzantine eras, have been so far unearthed.

The surface survey and excavations were previously carried out on the Kerkenes plateau by a team headed by British archaeologist Dr. Geoffrey Summers. The plateau is home to the traces of the lost city of Pteria in Sorgun’s Şahmuratlı village. Beginning from the previous year, the team left its place to 30 foreign archaeologists, headed by U.S. archaeologist Dr. Scott Branting from the University of Chicago. Until August, the team will continue working in an area surrounded by seven-kilometer walls dating back 2,600 years ago.

The war, also known as the Battle of the Eclipse, between the Medes and the Lydians ended with a solar eclipse on May 28, 585 BC, which was perceived as an omen that the gods wanted the fighting to stop, he said. The ancient city of Pteria was built after the war and the Battle of the Eclipse actually helped promote the Kerkenes plateau to the world.

A team from Italian Florence University has been continuing excavations in the Kuşaklı Tumulus since 2008 under the leadership of Dr. Stefania Mazzoni. The team determined that the region was under the influence of the Hittite civilization and the Hittite city of Zippalandawas in the region. A nearly 2,000-year-old bath in the Sarıkaya district was built by the Roman king to heal people’s wounds after his daughter’s recovery from a skin disease.

The remains of the bath have been in the process of being unearthed for four years by the Yozgat Museum Directorate. The work has been carried out by 16 workers and two archaeologists and so far traces from the Roman, Byzantine, Seljuk and Ottoman eras have been uncovered.

During last year’s excavations, it was discovered that the area served as a settlement for many civilizations from the Roman era to the Republic period. The confiscated buildings around the historic Roman bath, which is located in the center of Sarıkaya, were destroyed, too.