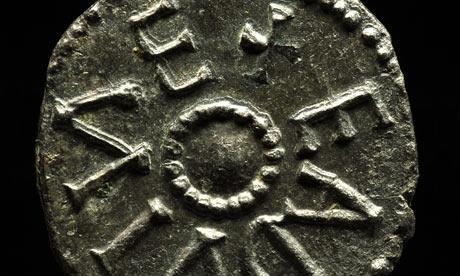 The rare Anglo-Saxon coin found at the minster shows that the city had its own mint. Photograph: Maev Kennedy

The recent excavation of a pair of Viking feet and a tiny silver Anglo-Saxon coin may lack the glamour of the discovery of the last Plantagenet, but it has shone a light on one of the least known periods in the long history of York Minister: the centuries between the fall of Roman empire and the coming of the Vikings, in AD866.

The coin, no bigger than a 5p piece, is a sceat, minted in York. It is in such good condition that experts at the British Museum first thought it was a Victorian fake. So good is its state of repair that marks are legible identifying the maker as Eadwine, who also minted coins for the Northumbrian court. It proves that York had enough status and wealth in the early 9th century to support its own mint.

The coin is so pristine it was probably never circulated, so the archaeologists surmise that it was dropped accidentally almost as soon as it was struck, and that the mint must therefore have been very close to the site of the present enormous medieval church, which was built over layers of earlier foundations, some of them Roman.

The excavation director, Ian Milsted, said the coin was evidence of the wealth that may have drawn the Vikings. He said: "This mint, and the wealth that would have surrounded it, may well have bankrolled the Anglian city and possibly the establishment of the Viking city, perhaps attracting the Vikings who stole the money even as they burned Alcuin's famous library and then settled here and traded with the Anglo-Saxon natives, eventually creating York's famous Anglo-Scandinavian communities."

The feet are from several centuries later, from a burial in the middle of the 11th century, the late Viking period of the city. They are all that remain of a high-status individual who was originally buried in a stone tomb that was destroyed by the foundations of the AD1220 Norman minster.

Remains of even earlier burials lay under the bones, revealing that the cemetery was in continuous use for many centuries, with no division between the Anglo-Saxon and Viking burial sites.

The discoveries have come from one of the smallest but most remarkable excavation sites in the country, a pit barely 2 sq metres in which a new lift is being installed to give full access for the first time to the minster's undercroft.

Archaeologists had to remove metres of concrete poured in during emergency underpinning in the 1960s, when one side of the cathedral was judged to be in danger of collapse. They were not confident of finding anything at all, but , human remains spanning centuries, broken, carved stone from many earlier periods of the building, Roman brick and finds such the little coin have poured out of the small, square pit. Much of it has been found in backfill packed in during Victorian construction work,

The work is part of a £20m, five-year project, due for completion in 2016, to redisplay and reinterpret the entire building. The undercroft is due to open to the public next year, with many of the finds displayed. The Dean of York, Vivienne Faull, said: "The underground chambers will tell the 2,000-year story of this site, from Romans through to the modern day, and it is wonderful that we are actually making new discoveries to add new deta ils to the story even as the attraction is being created. The story of York Minster truly is the story of York."

Milsted will give a talk on his finds in the minster on 22 February. It will be free to those with the usual paid admission tickets but must be pre-booked.

Future generations of archaeologists may be puzzling over another burial, if York's claims succeed concerning the burial of a man who died and was first buried 100 miles away and more than 500 years ago: it has lodged a formal claim asserting for its right, over Leicester's, to bury the newly identified remains of Richard III in the minster. The city authorities say it was the resting place the last Plantagenet king himself wanted.

The claim is supported by the Friends of Richard III – a rival group to the Richard III Society, which bankrolled the Leicester excavation and which is backing the Leicester Cathedral bid for the honour of the burial – and by the tourism group Welcome to Yorkshire, which points out that Yorkshire already has a Wensleydale cheese named after Richard III and a Richard III museum in one of the gatehouses of York's medieval city wall.