An Iron Age man whose skull and brain was unearthed during excavations at the University of York was the victim of a gruesome ritual killing, according to new research.

Scientists say that fractures and marks on the bones suggest the man, who was aged between 26 and 45, died most probably from hanging, after which he was carefully decapitated and his head was then buried on its own.

Archaeologists discovered the remains in 2008 in one of a series of Iron Age pits on the site of the University’s £750 million campus expansion at Heslington East. Brain material was still in the skull which dates back around 2500 years making it one the oldest surviving brains in Europe.

A multi-disciplinary team of scientists, including archaeologists, chemists, bio-archaeologists and neurologists, was assembled to attempt to establish how the man’s brain, could have survived when all the other soft tissue had decayed leaving only the bone.

The team is also investigating details of the man’s death and burial that may have contributed to the survival of what is normally highly vulnerable soft tissue. The research, which was funded by the University of York and English Heritage, is published in theJournal of Archaeological Science.

Archaeologists from York Archaeological Trust, commissioned by the University to carry out the exploratory dig before building work on the campus expansion started, discovered the solitary skull face-down in the pit in dark brown organic rich, soft sandy clay.

Since the discovery, the brain and skull have been kept in strictly controlled conditions, but scientists have examined samples using a range of sophisticated equipment including a CT scanner at York Hospital and mass spectrometers at the University of York.

Samples of brain material had a DNA sequence that matched sequences found only in a few individuals from Tuscany and the Near East. Carbon dating suggests the remains date from between 673-482BC.

Peri-mortem fractures on the second neck vertebrae  are consistent with a traumatic spondylolisthesis and a cluster of about nine horizontal fine cut-marks made by a thin-bladed instrument, such as a knife, are visible on the frontal aspect of the centrum.

Histological studies found remnants of brain tissue structures and highly sensitive neuroimmunological techniques, together with analyses, demonstrated the presence of a range of lipids and brain specific proteins in the remains.

The scientific team is now investigating how these lipids and proteins may have combined to form the persistent material of the surviving brain and what insight this may give on the circumstances between death, the burial environment and preservation of the Heslington brain.

Dr O’Connor said: “It is rare to be able to suggest the cause of death for skeletonised human remains of archaeological origin. The preservation of the brain in otherwise skeletonised remains is even more astonishing but not unique.”

“This is the most thorough investigation ever undertaken of a brain found in a buried skeleton and has allowed us to begin to really understand why brain can survive thousands of years after all the other soft tissues have decayed.”

Despite the place that ‘trophy heads’ appear to have played in Iron Age societies and evidence for the preservation of human remains in the Bronze Age, the researchers say there is no evidence for that in this case. Analyses found no biomarkers indicating deliberate  preservation by embalming or smoking.

Dr O’Connor added: “The hydrated state of the brain and the lack of evidence for putrefaction suggests that burial, in the fine-grained, anoxic sediments of the pit, occurred very rapidly after death. This is a distinctive and unusual sequence of events, and could be taken as an explanation for the exceptional brain preservation.”

Scientists have examined samples of the skull of an Iron Age man using a range of sophisticated equipment including a CT scanner. (Credit:  University of York) 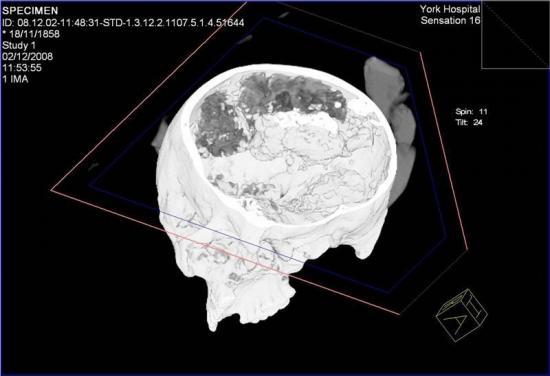