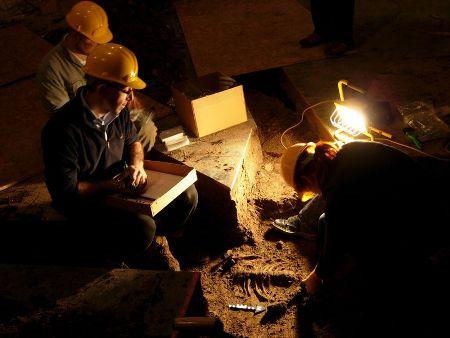 The bones of a Roman man, who was stabbed to death and left to rot with the rubbish, have revealed gruesome details of what appears to be a gladiator combat, according to British researchers who have examined the skeletal remains.

Unearthed in January only 12 inches under the grass the Yorkshire Museum’s gardens, in York, England, the bones show that the man, most likely a disgraced gladiator, met a violent and bloody death.

"The physical evidence reveals he was a swordsman and that his body was literally dumped with the rubbish –- there was no hint that he had been buried in a ceremonial way," said Andrew Morrison, head curator of the Yorkshire Museum, where the bones are going on display this week.

Analysis by experts from York Osteoarchaeology Ltd, revealed that the skeleton belonged to a powerfully-built male aged between 36 and 45, who stood around 5 feet, 10 inches tall.

"This was a huge man for the Roman period," said Morrison.

The bones strongly point to a gladiator's body as they feature all the hallmarks of repetitive sword training. Moreover, the injuries are much in tune with a gladiatorial combat.

Apart from lesions in the vertebrae, possibly caused by lifting heavy loads, the most notable clues on the skeleton were six blade injuries delivered at death.

The wounds include a cut to the lower vertebrae of the back bone, a slash to a lower right rib and two slash marks which penetrated the jaw, causing it to fracture.

"This shows evidence of a sword slicing through the jaw and then getting stuck, with the attacker then twisting the blade to get it free, breaking the jaw bone in two," said the museum in a press release.

According to the researchers, the man was attacked from the right side and numerous blows were inflicted before the final one.

A superficial wound literally took off a piece of the man's scalp, another blow cut the right side of the skull in two places.

Death came with a powerful stab to the back of the head.

The poor man's bones were not found in a position associated with an organized Roman burial, but rather with rubbish, such as broken pottery and animal bones.

"What is really interesting to us is that he was found in this area, which many believe could be where York's amphitheatre was located," Morrison said.

Founded as a fortress in 71 A.D., York (at that time called Eboracum ) was an important military base and urban settlement which grew to become the Roman Empire's northernmost provincial capital.

Unearthed near the Roman fortress in one of the few untouched areas in the city, the skeleton of the brutally killed man could mark the site of York's long-sought Roman amphitheater.

Indeed, it appears that many gladiators lived in York. Between 2004 and 2005, York’s archaeologists discovered the remains of dozens of headless, heavily built men, believed by some to be gladiators who lost their heads after their last fight.