York (G-B): a foetus and its heavily pregnant mother:found in All Saints church 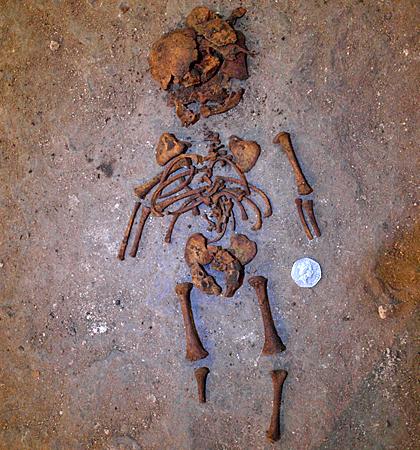 The bones of a foetus and its heavily pregnant mother have been found in a chamber of All Saints church in York, where three men were found “shoved” into a tomb with grave markings designed to ward off evil spirits during the early 13th century.

Ancient serviceable drains, pottery fragments dating from Roman times to the 18th century, entrenched Viking pottery and Anglian pieces with possible links to the baptism of St Edwin, the 7th century King of Northumbria, have also been discovered in the Lady Chapel, where a medieval-style tile pavement has been laid in an English parish church for the first time in 500 years. 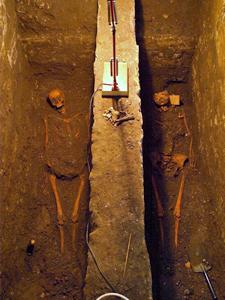 Two bodies found side-by-side at the church, which has been a worship site for 1,100 years© Courtesy All Saints Church

“The chemists got involved when we found a huge tomb,” says Dr Robert Richards, of the city centre church.

“They are looking at soil samples from different burials to see if there are any residues left in the soil from clothes.

“Unfortunately much of the paint is stuck to the bottom of one of them – they must have been stacked up while still wet and then plastered over.

“The tomb has a two-and-a-half ton mudstone top in the south-east corner of the chapel, below the piscina.

“Its ends were rebated to slide coffins in without lifting the capping stone.

"The foetus is from the pregnant woman in the tomb, and was returned to her before the tomb was sealed. All skeletons found in the tomb have been left in the tomb.

“There were three men in the South Chamber. The lowest skeleton was just shoved up to the far end to allow for the next burial.

“The south wall of the tomb had early 13th century grave markers built into it.

“Unlike the rest of the tomb internally, these were not rendered, so they were on show - possibly because they had Daisy Wheel good luck charms on them, and the tomb builders probably recognised these as symbols to ward off evil spirits.

"The grave markers have been re-set in the new floor, and the tomb repaired where necessary.

"A sondage through the tomb floor revealed that the Chancel wall is built off a cobble filled trench. They couldn't reach the bottom.

"Next to the cobbles were fragments of oolitic magnesium limestone roof tiles showing signs of burning, together with mutton bones showing butchery marks and soot - possibly a workers' picnic, or an earlier occupation.

“There was very little wear on the stones, so the mason's scribe lines - the setting out lines - were still visible.”

The drains were discovered by the York Archaeological Trust at a usable depth on the former Church Hall site, in a medieval rectory within the churchyard. 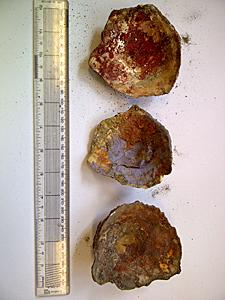 Church officials believe the Anglian sherd is similar to items found by Oxford Archaeology at Horcott Quarry in Gloucestershire, dated to early or middle Saxon times.

“All Saints North Street is the site of the York Visions - the best documented of all medieval English visions, in which the Virgin Mary appeared seven times, in 1421, to Emma Roughton, and foretold the death of Henry V,” says Richards.

“If confirmed, such a find would be of great interest to the church, since not only are finds of this period rare in York, but it would mark a link to the time of the Baptism of St Edwin, King of Northumbria.”

The results have not been formally published yet. Archaeologists are plotting a further phase of work once the timbers at the extreme west end of the north aisle are made accessible, with a number of timbers in its roof found to come from trees felled at once at some point between 1166 and 1191.

“If these timbers represent wood used for the original North Aisle Roof, then that would be consistent with an estimated date of 1180 for one of the columns in the North Nave Arcade,” suggests Richards, who has watched the emergence of other timbers from the late 15th century – when repairs were made to the roof after carved angels were adorned around new Chancel ceilings – and the late 17th century, during a later phase of repairs.

“While such early dates are not unknown in tree-ring studies, they do represent a very rare example – there being, probably, only a handful of other buildings in the country with timbers dating from this time.

"It is also interesting to note that one of the trees may have started growing as early as 930. This gave it a felling age of around 250 – a fairly uncommon occurrence in tree ring analysis.”

Timbers from the period are in the roof of York Minster Chapter House. Richards says their similarity to tree rings from Liverpool and Ely Cathedrals are a “further surprise”.

“This would suggest that all three samples came from the same area,” he points out.

“While the sources of timber for Ely and Lincoln are not reliably known, there is some intimation, from both documentary sources and from tree-ring analysis, that this might have been Sherwood Forest.” 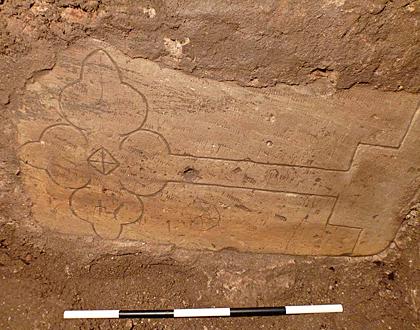