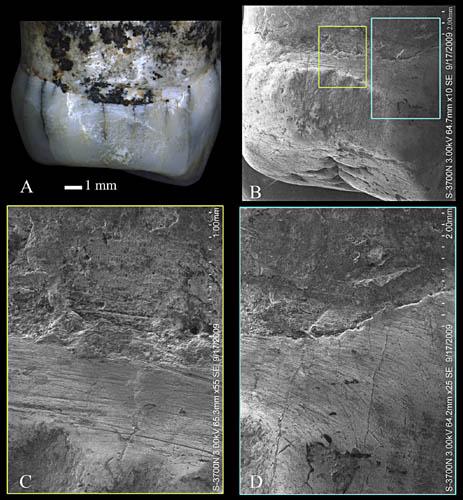 Fig.1 The interproximal groove (A and B) and striae (C and D) visible on the distal surface of a premolar tooth of Yiyuan Homo erectus. Credit: XING Song

Interproximal grooves have been identified on a variety of Pleistocene Homo taxa from different sites across the Old World. A diversity of hypotheses has been proposed to explain these interproximal grooves, ranging from oral hygiene to alleviating pain due to periodontal disease. The most popular explanation appears to be the habitual use of a toothpick, made of bone, horn or plant material. However, evidence of hominin tooth-picking is rarely reported in eastern Asia. In a paper published online in the journal of Quaternary International, scientists from China, Spain and the United States reported evidence of tooth-picking in the middle Pleistocene Homo erectus recovered from Yiyuan, Shandong Province, eastern China, providing one of the earliest evidence of tooth-picking among Pleistocene hominins in eastern Asia.

Yiyuan Homo erectus, including several hominin cranial fragments and seven isolated permanent teeth, were discovered in 1981 and 1982 at Yiyuan, a Middle Pleistocene fissure site in Shandong Province, eastern China. Based on faunal correlations, Yiyuan is penecontemporaneous with Layers 4 and 5 of Zhoukoudian Locality 1 and dates to either 300000 years by U-series, fission track, and thermoluminescence or 486000- 64000 years by TIMS U-series. Earlier research on the Yiyuan hominids showed that they were the earliest people living in the middle and the lower reaches of the Yellow River. One of the Yiyuan hominids was believed to be 40 years old, the other was in its 20s.

Generally, interproximal grooves that result from tooth picking are located at or near the cervical line. These grooves are usually elongated buccolingually and semicircular or tubular in cross-sectional view. These marks are normally identified on posterior teeth. When observed under higher magnification, fine parallel striae can be identified on the floor of the groove running parallel to the groove. There is no preference for the marks to appear on either the mesial or distal side, but when located on the distal end a major portion of the buccal side often appears to be modified.

Researchers used a binocular microscope and scanning electron microscopy to analyze the seven teeth interproximal surfaces from Yiyuan, and found the crowns and roots of the teeth exhibited different degrees of wear, which range from multiple fine striae to deep interproximal grooves. The location, morphology, and dimension of these grooves or striae are similar to artificial wear caused by habitual tooth-picking.

"As there is no clear evidence of dental pathologies in the Yiyuan teeth the therapeutic purpose could be discarded. The most likely explanation appears to be that food particle removal and pure habit resulted in this morphological patterning on the Yiyuan teeth", said study coauthor Dr. XING Song, Institute of Vertebrate Paleontology and Paleoanthropology (IVPP) of the Chinese Academy of Sciences, "It has been suggested that the use of toothpicks is unique to the genus Homo, and tooth-picking could have accompanied the dietary shift to a heavier reliance on animal protein. Thus, in Yiyuan teeth, the proposal that toothpicking with hard needle-like stick was used to remove food particles (e.g. animal protein) stuffed between teeth and release the gums pressure is likely to be very plausible."

"Evidence of tooth-picking was also found on fossils on Peking Man, who was estimated to be between 580,000 and 280,000 years old. But scientists also doubted that the wear on their teeth was caused by tooth diseases," said Dr. XING Song.

"Earlier researchers had carried out detailed morphologic research on the Yiyuan hominids. It is wonderful to have these fossils re-examined, and we observed the groove and/or striae patterns in five posterior teeth of Middle Pleistocene Yiyuan Homo erectus," said SUN Chengkai, a researcher of the Shandong Museum.