Seaside Fortress Was a Final Stronghold of Early Islamic Power

Archaeologists have long known that Yavneh-Yam, an archaeological site between the Israeli cities of Tel Aviv and Ashdod on the Mediterranean coast, was a functioning harbor from the second millennium B.C. until the Middle Ages. Now Tel Aviv University researchers have uncovered evidence to suggest that the site was one of the final strongholds of Early Islamic power in the region. 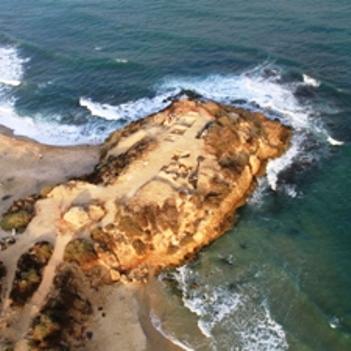 An aerial view of the promonotory on which Yavneh-Yam is located. Photo: Skyview.

According to Prof. Moshe Fischer of TAU's Department of Archaeology and Near Eastern Cultures and head of the Yavneh-Yam dig, the recent discovery of a bath house from the Early Islamic period which made use of Roman techniques such as heated floors and walls, indicates that Arabic rulers maintained control of the site up until the end of the Early Islamic period in the 12th century AD. Considered alongside other datable artefacts — such as pottery, oil lamps and rare glass weights — this architectural feature demonstrates that Arabic control was maintained in Yavneh-Yam at a time when 70 percent of the surrounding land was in the hands of Christian crusaders.

The fortress was inhabited by military officers but not by high powered rulers, explains Prof. Fischer. Written Arabic sources from the same period, identifying Yavneh-Yam as a harbour, suggest that those who inhabited the fortress were responsible for hostage negotiations between the Arabic powers and the Christian crusaders, and the harbor itself served as a port for hostages to be transferred to their captors or returned home.

Working with Ph.D. candidate Itamar Taxel, Director of Excavations, Prof. Fischer has been excavating the site of Yavneh-Yam for the past twenty years. Among the earliest finds were two glass weights, dating from the 12th century and which bore the name of the then-ruling Arabic power, the Fatimid dynasty. The weights themselves were of interest and certainly indicated an Arabic presence at the site, the excavators say. But the extent of this presence has been illuminated by the discovery of a bath dating to this period and built according to Roman principles. 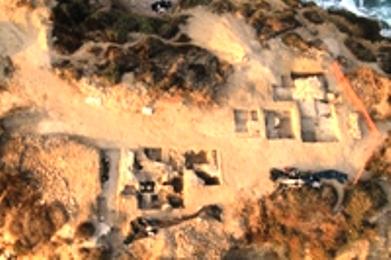 An aerial view of the excavated areas at Yavneh-Yam. Photo: Skyview.

This year for the first time, researchers completed an in-depth analysis of the site's promontory, the piece of land protruding into the sea that made the site a natural harbor. The main structures, a series of fortification systems including a tower and strong walls that encircle the upper part of the hill, were discovered to be built in the distinctly Early Islamic style. The Roman baths uncovered within the fortress, says Prof. Fischer, leave little doubt that in the 12th century, the fortress was still inhabited by Arabs rather than Christian crusaders.

"This is an outstanding and rare find," he says, describing the baths as a scaled-down version of traditional Roman baths, heated by hot air circulating between double floors and pipes along the walls. The crusaders did not build these types of baths, and after the end of the Early Islamic period, they disappear altogether. "You don't see these installations again until the revival of such techniques by modern technology during the 19th century," explains Prof. Fischer. "This marked the finale of the use of a traditional Roman bath house in 12th century architecture."

Most likely, the fortress played host to a changing roster of military captains and their men, installing the baths to provide these men with additional creature comforts. Although the baths themselves are largely destroyed now, researchers found large marble slabs that adorned the walls, and ascertained that the view from the baths overlooked the sea.

A place of business?

The fortress served as more than a strategic look-out point to protect fragile Arab strongholds against the invasion of crusaders. Sources indicate that Yavneh-Yam, like the ports of Ashdod and Yaffa, was a place where Christian crusaders and Arabs haggled over hostages.

During this period, both the crusaders and Arabs took prisoners from the other side, who would later be exchanged, either for ransom or other prisoners-of-war who had been captured. The crusaders would have come over in boats to negotiate with Arab officials, then send word to the Ramla, the Arabic capital, waiting for orders and to conduct the required transaction.

Researchers will continue to excavate the site, now a national park, says Prof. Fischer. By connecting these new archaeological findings with historical evidence, "We get a nice picture of the complex relationship that existed in the Holy Land between a handful of Muslim enclaves, connected with the Arab rule in Cairo, surrounded by crusaders."