Xiongjiawan (chine) : Site has provided substaitantial remains of the Yuxiping culture, periods of Western Zhou and Ming and Qing Dynasties.

The Excavation of Xiongjiawan, Banan, in the Chongqing City

The Xiongjiawan site is situated at Guangming Village, Huaxi County, Banan District, It is on a secondary terrace on the right bank of the Yangtse River, just facing the Xiaohekou site at the other side of the river. From March to May in 2010, Chongqing City Institute of Archaeology conducted a series of salvaging excavations on the site, and exposed an area of 2,000㎡. This site has provided substaitantial remains of the Yuxiping culture, periods of Western Zhou and Ming and Qing Dynasties. 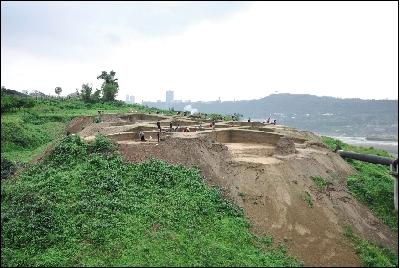 Remains of the Yuxiping culture mainly distributes in the northeastern corner on the site. Features of the culture include three pits and two ceramic kilns. The pit H5 is nearly round in shape, with a diameter of 96～104 cm on the rim, a diameter of 70～74 cm in the base, and a depth of 36 cm. The pit-wall, oblique and straight, shows clear and neat appearance with a fairly flat base.

The pit-fill appears yellowish/brownish and light greyish with the soil porous. A flat-based pot with sand inclusions and a fine ware in the form of high-necked flask were unearthed from the pit. The shapes as well as forms of two kilns are rather similar, however, the preservation of Y1 is much better. It is spoon-shaped, consists of two parts, i.e. a chamber and a fire way. The kiln-chamber has a U-shaped, horizonal plan. There are six, round fire-holes surrounding the chamber, where the middle one is big, with a diameter of 10 cm, opposed to the others, much smaller. Also, an arched kiln-wall is situated on the top of the kiln-chamber. The horizontal plan of the fire way is rectangular in shape, stretching the base of the kiln at a slope. The kiln-fill appears greyish and brownish with the soil porous. Also, the red baked deposit contained in the soil may have been a result of the collapse of the kiln-wall. The fill of the fire way appears black and brownish with the soil porous. Otherwise, archaeologists found black ashes at the base of the fire way. 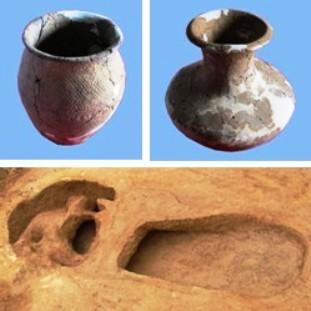 The remains of the Western Zhou, found in the northeastern corner of site, contained only one pit. This pit, isosceles-triangular in shape, has its base, 98 cm, middle 74 cm, depth 30 cm. The pit-wall is fairly straight connected with a flat pit-base.

The deposits of the Ming and Qing Dynasties, frequently found on the site with an exception of the northeastern corner, consist of 21 pits, 5 trenches, and 1 kiln, with a great amount of blue-and-white sherds. 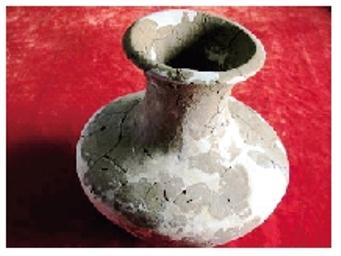 First of all, the remains excavated in the major District of the city have been clearly identified to be the Yuxiping culture centered in the Yudong area. to the discoveries have extended the distribution of the Yuxiping culture and provided new evidence for its evolution and development. Otherwise, the discovery of the ceramic kiln of late Neolithic Times found in the Xiongjiawan site unquestionably has important potential for the technology of the manufacture of the pottery, temperature of firing, etc.

Two intact ceramics were uncovered in H5, where the position of putting the pottery may indicate some meanings, probably associated with certain kind of religious rituals. Since it is here not far away from the Yangtse River, rather than ample resource of  flora and fauna provided by the River, the floodings may have brought destructive attacks to the settlement of late Neolithic Times, when productive power must have been primitive. In these manners, H5 may have been used to sacrifice the Yangtse River, the natural god, for the purpose of obtaining ample source of food and secure living environment.

The samples of C14 with clear stratigraphy will help to define the absolute chronology of the Yuxiping Culture.    (Translator: Sang Li)