Archaeologists divided Zoroastrian Cemetery into two zones, A and B. Zone A included remains M1 to M7. M1 were completely unearthed which had been plundered by grave robbers, meanwhile two sacrificial remains M2 and M4 were also cleaned in order to understand the distribution of the cemetery. After the excavations, it appeared that M2 to M7 were remains of sacrificial offerings to the ancestors which contained fragments of bone and other small items. They haven’t been cleared up completely.

Zone B included remains M8 to M47, from which M10 to M12 were excavated. They were all tombs encircling stone wall. The objective of these excavations was to gain a preliminary knowledge of the cemetery’s contents, to make further archaeological work here easier. Using M11 as an example, details are as follows:

The encircling stone wall of tomb M11 has an irregular round shape with a diameter of 6.7 cm. The chamber entrance passage has a length of 150 cm, width of 75 cm and depth of 80 cm. The burial chamber is 320 cm in diameter and 155 cm deep. There appears to be a sacrificial pit on the northern end of the enclosure. The pit consists of a square made from four rocks, 42 cm long, oriented north to south, with two blocks of wood.

The burial chamber interior was filled with sandy soil that mixed with a lot of small pebbles and traces of burned materials. The soil filling the chamber also contained pottery fragments and the bones of a sheep that had been a sacrificial grave good. There is an arrangement of logs 20 cm below the tomb’s southern mouth, oriented east-west and serving as wooden roof. There are eighteen logs in the arrangement, ranging from 145 to 106 cm long and 1 to 5 cm in diameter. A mat of woven straw-like material covers the top of the roof. 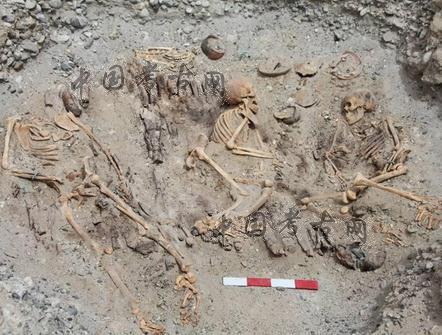 The bottom of the burial chamber has a square-shaped burial bed with a length of 150 cm. The western part of the bed is slightly elevated. The bed is composed of two wooden planks, atop 26 wooden sticks, with diameters between 2 and 5.5 cm. These are arranged east-west and oriented north-south. The two planks are 150 cm long and 14 cm in diameter. One of the planks has traces of burning. A large amount of seeds was unearthed from beneath the burial bed. 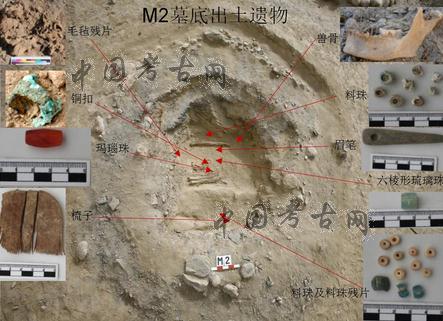 Most burial goods were arranged on the top of the heads of the first and second skeletons, including pottery, ironware, wood items, makeup sticks, etc. Between the skulls of the first and second skeleton was a ceramic pot with sheep scapula inside. Beneath the ceramic pot that was found above the skull of the first skeleton were an eyebrow pencil, a wooden ornament, and unusual white stones. A wooden bowl with an iron cooking knife inside was unearthed in the northern part of the burial chamber. Altogether seven pottery vessels were unearthed, as well as four copperware items, three iron knives, three wooden articles, and three (sets) strings of beads. All were extremely damaged. 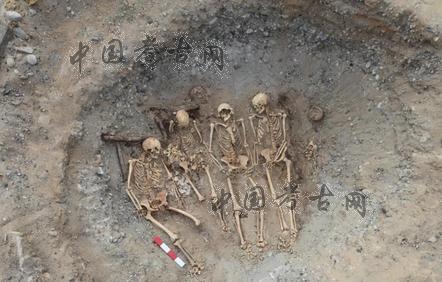