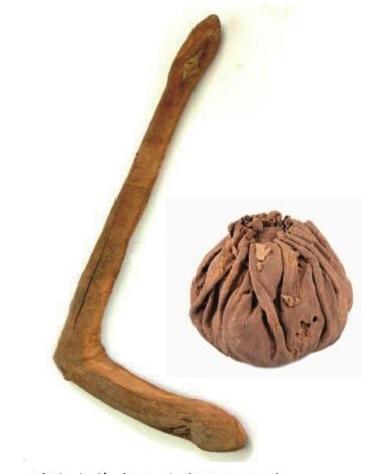 A photo of the ancient leather ball and polo stick found in the ancient Yanghai Tombs in Turpan. (Photo : www.china.org.cn)

The recent discovery of three leather polo balls said to be 2,400 to 2,800 years old in Xinjiang Uyghur Autonomous Region in northwest China indicated that polo was being played in China 800 years ago or earlier than previously thought, archaeologists said.

According to an article published in China.org.cn, the leather balls discovered in the ancient Yanghai Tombs in Turpan were made of sheep skin and stuffed with scraps of leather and wool. Each ball is about the size of a fist, with a red cross painted on the bottom, the article said.

Chen Xinyong of Academia Turfanica said on May 11, Monday, that the balls have a design very similar to the ones unearthed from a Western Han Dynasty (202 B.C.- A.D. 9) tomb in Dunhuang City in northwest China's Gansu Province.

The report said that aside from the polo balls, eight long-handled mallets were also found that are recognizable from paintings of the Tang Dynasty (618-907), when polo was popular and frequently portrayed in works of art.

Mallets with similar design were also found in the terracotta polo players excavated from the Astana Tombs in the region, the report added.

The discovery of the new items supports the theory that there was a thriving polo culture in Xinjiang during the early times. A polo field measuring 6,600 square meters was also discovered in recent years in the region's Tashkurgan Tajik Autonomous County.

The report said that the Yanghai Tombs, which date back to 3,000 years, are the grandest tombs discovered in the Turpan Basin and adjacent regions. Excavation began at the site in the 1970s during which archaeologists found large numbers of well-preserved items.