Xiachuan site in Shanxi Province is an important Upper Paleolithic site. It has been excavated and surveyed for two significant seasons for the past 40 years, which laid the groundwork for the Xiachuan site in the field of Chinese prehistoric archaeology.

From June to October, 2014, excavation has been carried out by the jointly archaeological team consisting of Shanxi Provincial Institute of Archaeology and School of History, Beijing Normal University. There are 4 square units having been excavated, which cover an area of 77 square meters.

Fireplace before being cleared in Xiachuan site, Shaanxi

According to C14 dates, it’s known that the date of Xiachuan site ranges from 22,000 to 40,000 years ago. According to the morphological analysis of stone artifacts, around 26,000 years ago, huge change has occurred in lithic technology of Xiachuan ancient people. Blade-microblade technology appears. Main artifacts related are blades, comb-shaped blades, microblades, conical cores, backed knives, end-scrappers, wedge-shaped tools. Stone saddle-querns are mainly found in the layer from 26,000 years ago and bear little relationships with microblade and blade cultures. 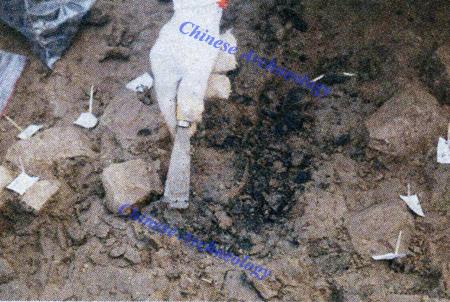 Blade technology is a significant component of Upper Paleolithic period in Europe, West Asia and Siberia Area and an important hint of modern human’s behavior. In China, it mainly spread in Shuidonggou site, Ningxia Province, Jinsitai site, Inner Mongolia, and ones in Jilin and Heilongjiang Provinces. The discovery of Xiachuan blade technology provides vital important data for our exploration of the origin, exchange and migration of modern human in China.

Charcoals  in the center of the fireplace have been clean up, beneath them, there is a shallow pit, the ground of whose bottom has been burned to red.

Fireplaces, grinding stones and hematite are discovered together in Geliang location of Fuyihe river reach. Six fireplaces and plenty of firing remains are found. Besides, one of the fireplaces is well preserved. The opening has been closed completely by cobble stones. Lots of charcoals are uncovered in the center of the fireplace. Beneath them, there is a shallow pit, the ground of whose bottom has been burned to red. Other fireplaces are circled by fist-like cobble stones. Several flat cobble stones are found in the periphery of the stone circle and usually used as grinding stones. During the excavation, tiny hematite powders are easily discovered due to their brightly red color. The diameter of the largest one is more than 1 cm. According to all discoveries above, it’s common for us to realize that grinding stones might be related to the production of hematite powders in Xiachuan site. 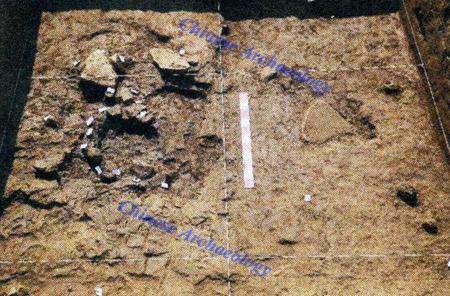 Full view of the fireplace: the shallow pit circled by fist-like cobble stones and stone blocks, and three flat cobble stones are found in the periphery of the stone circle

Hematite powders have been an important religiously ritual supply in prehistory. Jinchen district has long been regarded to be “home of coal and iron”. Besides, the iron ores are mainly “Shanxi typical iron ores” which major constituent is hematite. It’s a subject worthy of further exploration whether this site might be used as a place to produce hematite powders in certain period with the consideration of the fireplaces and grinding stones discovered intensively distributed in Geliang location of Fuyihe river reach in Xiachuan site. 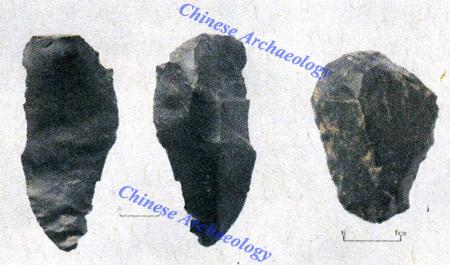 What’s more, in the upper layer of Geliang location of Fuyihe river reach, boat-shaped microcores, which are widely spread in North China, have been found. Although it’s still immature to predict the date of the cores, it’s enough to demonstrate that different development stages of microblade technology have been existed in Xiachuan site. Therefore, one focus of further work will be finding original layer after 22,000 years.

Overall, Xiachuan site has been a significant Upper Paleolithic site with rich contents. It probably goes through the whole development of Upper Paleolithic cultures from 40,000 years ago to 10,000 years ago. Thus, it’s important to reveal its implications completely which provides new perspectives and evidences for major and important researches in terms of the origin, migration, cultural exchange and behavior patterns of modern human in China as well as transition between Neolithic and Paleolithic periods.      (Translator: Ma Huanhuan)