They have watched over the tomb of China's first emperor for more than 2,000 years, but it appears the terracotta army is about to swell in size.

New excavations close to the mausoleum of Emperor Qin Shihaung, who founded the Qin Dynasty in 221BC, have revealed nearly 1,400 of the life size clay statutes.

They estimate the pit, which is thought to have been where the army's cavalry and archers were placed, also contains 89 war chariots along with statues of horses.

It is the first dig at the site since 2008 when activity was halted at the site due to a lack of adequate personnel.

Some of the most exquisite statues were uncovered during early work at the site, including a rare warrior with a green face.

The discovery suggested that the army was once colourfully painted, but the pigments have faded over time.

Yuan Zhongyi, one of the archaeologists leading the project, said the pit contained 'the essence of the terracotta warriors' due to the mix of figures there.

According to China News Service, he said: 'You can find all the kneeling archers, soldiers and cavalry in the number two pit.

The terracotta army was first discovered by accident in 1974 by farmers in Lintong District, Xi'an.

Archaeologists have uncovered four distinct pits each around 23 feet deep – the largest of which contained 6,000 of the terracotta warriors.

The second pit is thought to contain the cavalry and archers, although only 120 figures have been recovered so far.

The third pit contained the tallest figures and are thought to be the generals and officers while the fourth pit appears to have been left empty.

The army is thought to have been built to protect Emperor Qin Shihaung after his death and were positioned just under a mile east of his burial mound.

The soldiers were laid out as if to protect the tomb from invaders to the east – the states where the Qin Emperor had conquered.

Along with the figures themselves – which were so detailed that their armour bear rivets and their shoes have treads – there were numerous weapons found.

Many of the swords and spears were found to be still sharp and a coating of chromium dioxide had managed to keep them rust free. 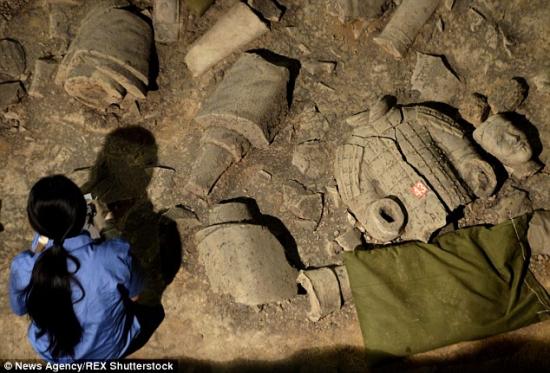 Archaeologists have been attempting to preserve the pigments painted onto the terracotta statues during the excavation. One of the archaeology team is pictured above as a new excavation gets underway at the site

It is thought that many of the figures had been painted with bright pigments including red, green, blue, black and brown.

Preserving the painted surface has proved particularly challenging during the excavations. In some cases it has peeled off within minutes of exposure to the air.

For this reason the original excavation work at pit number two was halted in 2008 in the hope of finding better ways of preserving the delicate artworks. 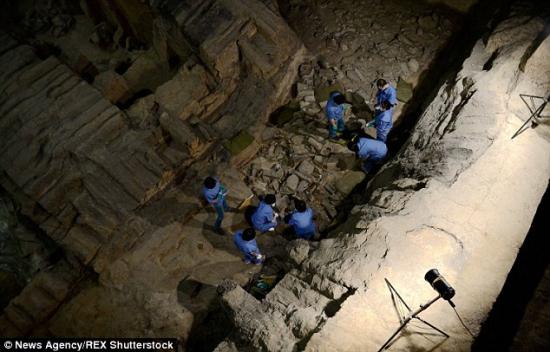 Archaeologists say they expect to find 89 chariots as they slowly unearth the figures, as shown above 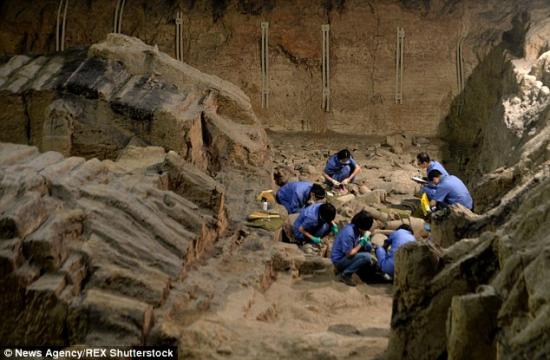 The statues in pit number two (shown above) are some of the best preserved to have been found so far
Archaeologists are now preparing to unearth an area of 200 square metres in a new excavation in the pit.

Figures uncovered at the site will be wrapped in cling film in an attempt to protect them from the dry Xian air.

It is hoped that digital scanning will also help record the colours before they can fade away.