Archaeologists were greatly surprised when they opened the entrance of tomb number 13 at the cemetery complex of a Han Dynasty official in Northwest China's Shaanxi Province. They unearthed 11 bamboo containers that date back more than 2000 years, containing what is believed to be delicacies.

The containers were discovered in a small room adjacent to the main tomb believed to belong to a daughter-in-law of Zhang Anshi, a high-ranking official during the Western Han Dynasty, from 202 BC until 9 AD. 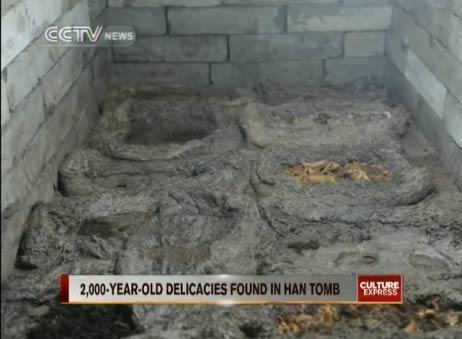 Ding Yan, Archaeologist said "It's totally out of our expectations. When we opened the door, we were dumbstruck. The bamboo containers are really rare finds. It's uncommon in the excavation of such tombs."

It's the first time that archaeologists have found such wares in the mausoleum of the Zhang family. Archaeologists suppose that it relates to the personal preference of the tomb owner.

Zhang Zhongli, Vice Dean of Shaanxi Archaeological Research Institute said "We saw some fungus-like things and some animal bones in the bamboo containers through an endoscope. Since the tombs are often designed to mirror the life of the tomb owners, the foods were probably some delicacies."

A lacquer wooden box was also found in the room. The excavation is suspended until the woodware and bamboo relics are protected.