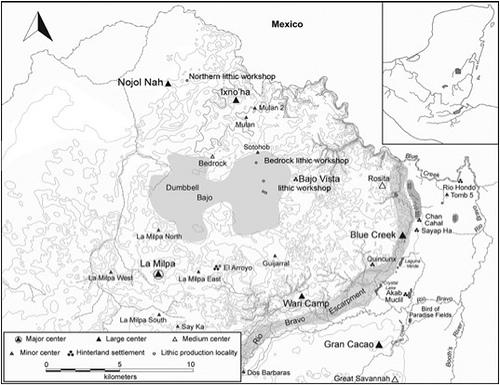 Map of northwestern Belize region showing Xnoha in relation to other sites in the area. Courtesy Maya Research Program

“We will begin a new excavation of large elite residences north of the site core called the MJ Courtyards,” said Colleen Hanratty, a senior member of the MRP excavation team. “We will also be returning to the large shrine northeast of the site core and will penetrate the floors of this structure, and we’ll also excavate a feature known as "rejollado" just south of the Blue Creek site core. (Blue Creek is another Maya site southeast of Xnoha.).” The 6.5-meter deep rejollado structure measures 350m2 and previous testing and radiocarbon dating indicated that its lowest stratum dates to about 2550 BC. 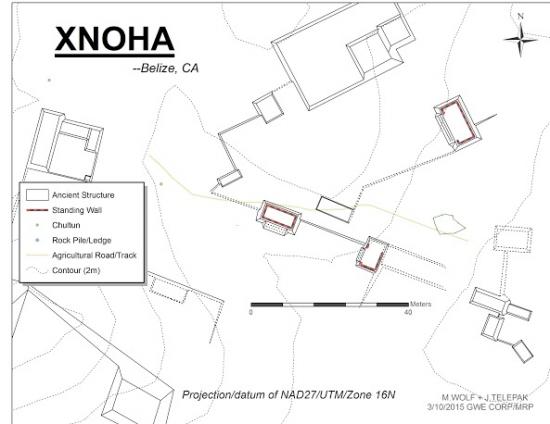 Xnoha is a medium-sized Maya center composed of a large central plaza that is surrounded by numerous residential building groups. It was first identified in 1990 and then surveyed, mapped, and partially excavated between 2002 and 2004 before the current excavation project was initiated. Excavation results have thus far suggested that the site was occupied from the Late Preclassic to the Terminal Classic period (300 BCE – 925 CE). The site is being studied to help archaeologists gain a clearer picture of elite-elite and elite-commoner interaction, relationships, and Maya societal structure. Toward that end, researchers hope to build a ‘domestic structure database’ through the excavation of elite household groups and compounds within the site's settlement zone. 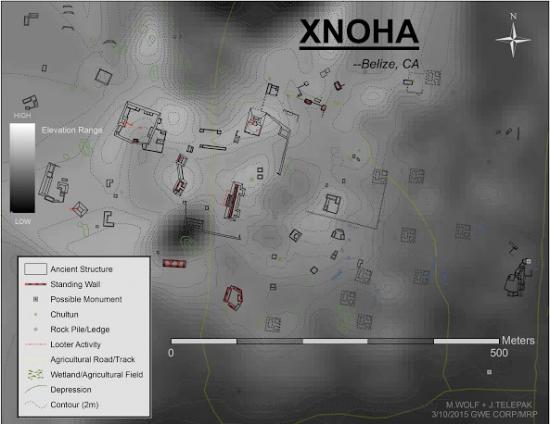 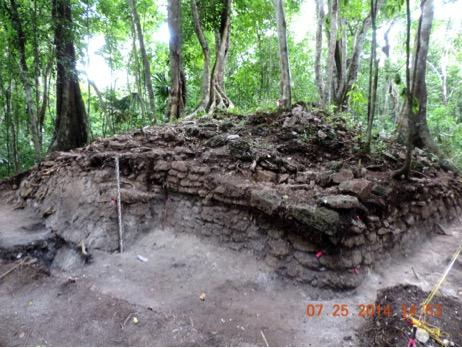 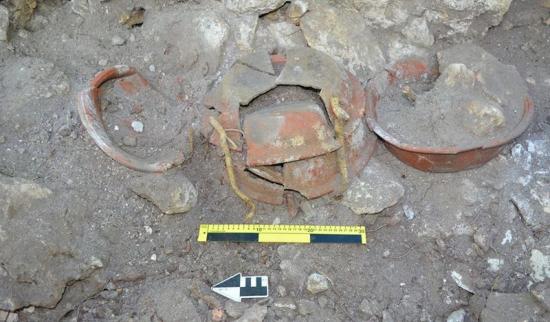 A cache of Sierra Red vessels in situ, immediately after excavation of an elite 'patio group' at Xnoha. Courtesy Maya Research Program.

The cache restored to its appearance as originally configured. Courtesy Maya Research Program.

During the 2013 excavations, archaeologists worked at a patio group. A patio group, as defined by Maya archaeologists, is a complex of rectilinear structures placed on a leveled hill in an L-shape configuration that generally face eastward and are positioned around a central plaza or patio (open space). The Xno’ha group is a series of range structures, which are large, vaulted and multi-roomed. Patio groups are usually associated with individuals and families with elite status.

"The approach undertaken was to first locate the patio surface and baseline of two structures before broader stripping of the associated architecture," said Parmington, a lead archaeologist and the patio group site supervisor. "Not only did the excavations reveal the final phases of the patio’s architecture, a large cache of nine Sierra Red vessels dating typologically to the Late Preclassic period (300 BCE - 250 CE) were recovered below the Patio’s exterior floor. Four of the vessels were stacked in a lip-to-lip configuration with one vessel positioned immediately north and south of the stack. Phytolith analysis of the sediments contained within the vessels determined the presence of sponge spicules – indicating the vessel contained marine sponges. The Pollen and phytolith analysis further indicated they contained large amounts of leaves from shrubs and trees, herbaceous monocots, palm fruits, and plant oils that may have been poured into a lower vessel.”