High in the alpine forests of northwestern Wyoming, archaeologists have discovered more than a dozen villages dating back over 2,000 years, a find that could alter our understanding of the scope of human habitation in the ancient West, as well as the histories and migrations of the people who lived there.

And although the discovery of these sites was in many ways unexpected, the scientists who found them actually predicted they would be there. 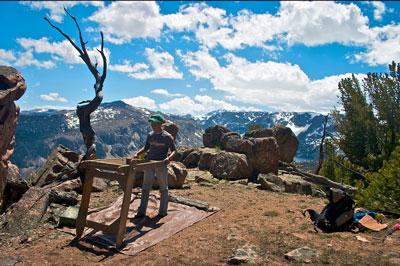 An archaeologist screens for artifacts at the site of a prehistoric village in Wyoming’s Wind River Range. [Image (C) Matthew Stirn]

The villages were found across more than 300 square kilometers in Wyoming’s Wind River Range, at elevations over 3,200 meters, making some of them the highest prehistoric sites ever found in Wyoming - and possibly the oldest high-altitude settlements found anywhere in North America.

The sites are replete with artifacts like groundstones, projectile points, and pottery, plus pipes and other wares carved out of soapstone. They also feature several - sometimes as many as 70 - stone-lined circular platforms hewn out of the mountain slopes: the foundations of wooden “superstructures” thought to have been lodges.

Judging by the settlements’ lofty location, along with their architectural features and artifacts, archaeologists believe they were built by early Numic-speaking peoples, the mountain-dwelling ancestors of the diverse but related tribes that today include the Comanche, Ute, Shoshone and Northern Paiute.

“In archaeological research, mountains have generally been overlooked as fringes, boundaries, and marginal landscapes,” said Matthew Stirn of the University of Sheffield in an interview. He announced the discovery in a recent study published in the Journal of Archaeological Science.

“When we came across [these] villages in the Winds, it proved that not only did family groups live for long periods of time in the mountains, it also showed that this practice occurred rather consistently for several thousand years throughout prehistory.”

As important as the newly found villages are, they were not the first to be discovered in the Wind River Range, Stirn noted.

In 2006, Dr. Richard Adams of Colorado State University and his team found a prehistoric village at 3,500 meters above sea level, with evidence of more than 65 residential structures.

Dubbed High Rise Village, the site featured artifacts and traces of lodges dating over at least 2,500 continuous years, opening up a new frontier of high-altitude archaeology in the intermountain West.