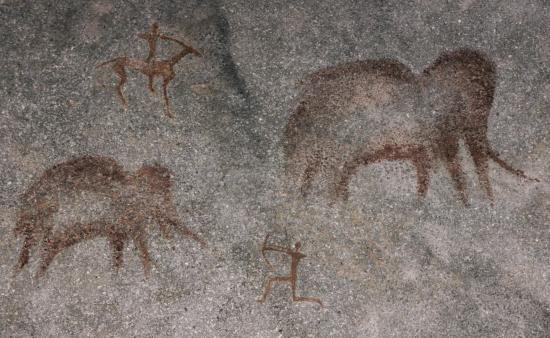 A rock painting, which is not part of the current study, showing mammoth hunters. Credit: gerasimov_foto_174/Shutterstock

Men from Bosnia and Herzegovina, the Netherlands, Croatia, and Montenegro are, on average, the tallest in the world, according to new research that helps to explain why such individuals often grow to six feet and more in height.
Their stature appears to be at least partly a genetic legacy of the Upper Paleolithic Gravettian culture, says the study, which is published in the journal Royal Society Open Science. The Upper Paleolithic broadly dates to between 50,000 and 10,000 years ago.
"The Gravettian is the most important prehistoric culture of the Upper Paleolithic Europe and is sometimes called ‘the culture of mammoth hunters,'" lead author Pavel Grasgruber of Masaryk University told Seeker. "I suspect that this big game specialization associated with a surplus of high-quality proteins and low population density created environmental conditions leading to the selection of exceptionally tall males."

Remains of Gravettian men suggest that they stood between 5 feet 10 inches and 6 feet 2 inches on average, which was an extraordinary size for the time. In contrast, men among the ancient Maya who lived several thousand years later were 5 feet 2 inches tall on average. Mayan women were about 4 feet tall on average.

For the new study, Grasgruber and his team surveyed 3207 male students aged 17 to 20 years old from Bosnia and Herzegovina. Each participant filled out a basic questionnaire and had their height, sitting height, and arm span measured. The research is part of a larger ongoing survey of both men and women from countries known to have many tall individuals.

As Grasgruber previously indicated, good nutrition and environmental factors can influence the height of a population. Socioeconomic factors are important now as well, making it all the more puzzling that some of Europe's poorest regions are home to men that tend to grow over six feet tall on average. This places a greater focus on genetics.
Prior research conducted by Grasgruber and other scientists connected the Y haplogroup I-M170 to tall stature.
"We know that the oldest sample carrying I-M170 belongs to a man from the Gravettian culture who lived some 33,000 years ago in Southern Italy," Grasgruber said.
He explained that this group of genes, along with other related haplogroups, has been traced to parts of Asia and Europe, including to where many of today's tallest men live.

Another factor affecting the Bosnia and Herzegovina men could be higher calcium intake. The late anthropologist Carleton Coon, author of the book" The Mountains of Giants: A Racial and Cultural Study of the North Albanian Mountain Ghegs," noted that the Dinaric Alps contain limestone bedrock with high mineral content, including calcium. Grasgruber said that Coon's "idea is not unreasonable."

Tall stature can be a mixed blessing. On the downside, larger individuals can require more nutrition and may be at greater risk for some health issues, such as cancer, blood clots, and spine problems. On the upside, many of us — particularly in Western cultures — tend to favor tall people, viewing them as more attractive and strong. Tall height can also be advantageous for particular sports, such as basketball.
Grasgruber, however, said that "the sports talent in the Dinaric Alps is largely being wasted." He explained that there is not enough interest in individualized sports where height could be beneficial, such as track and field. He also said that many families in the region could not afford to support their children's participation in certain sports.