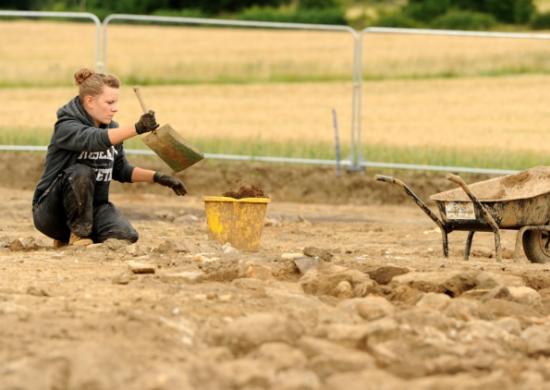 Archaeologists have been digging in at Winchburgh as they study an ancient settlement underneath the site of the former Beatlie School.

During the initial excavation of the site, contractors uncovered what they thought was some form of Neolithic or Iron Age settlement.

West Lothian Council is now funding an excavation of the site, involving 10 archaeologists approved by West of Scotland Archaeological Services who carry out the statutory approvals role on behalf of the council.

Co-directors Magnus Kirby and Jamie Lewis of CFA Archaeology are excited about what the dig may turn up.

Magnus explained: “It’s comparatively rare to find a site like this and it’s an important find. It was originally recognised through photographs taken from the air; the growth pattern of crops can indicate quite a lot about the land.”

The work is hard graft for the 10 men on site. They haven’t as yet found any  artefacts which they need to properly identify the age,  although other factors can give a guide to this.

Magnus said: “This is more about structure and morphology (the form and structure of organisms without consideration of function) of the site.”

As well as artefacts which can help with dating, carbon dating can also be used.

The site was cleared first by mechanical means which revealed two distinct circles. Digging then began in chosen spots where the men carefully sift through the soil and stones which come to light.

The weather plays its part and the men have enjoyed the sunshine that was there when they began the dig and had to cope with the rain which brought some waterlogged ditches.

Plans for the development at the site are on ice at present while the archaeologist continue with their work but the site will be released when the work is finished.

Magnus said: “The intention is to create a paper and photographic record rather than the preservation of the site.”

The Neolithic era, or New Stone age, was a period in the development of human technology, beginning around 10,000 BC and ending between 4500 and 2000 BC.

Traditionally considered the last part of the Stone Age, the Neolithic commenced with the beginning of farming, which produced the Neolithic revolution and ended when metal tools became widespread.