Willendorf (Autriche): Modern humans may have migrated into Austria 43,500 years ago 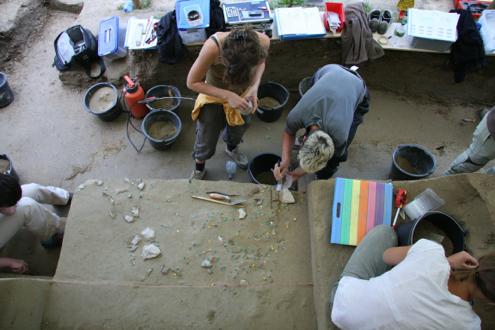 A multinational team analysed stone tools recovered during a recent re-excavation of the find site of the Venus of Willendorf in Austria. The authors identified the stone tools as belonging to the Aurignacian culture, generally accepted as indicative of modern human presence. Chronostratigraphic information suggests the tools date to around 43,500 years ago, pre-dating other known Aurignacian artifacts. Based on the type of soil and its mollusk assemblage, climatic conditions during that time were likely cool, with a steppe-like environment and some conifer trees along river valleys. The date of the artifacts represents the oldest well-documented occurrence of behaviorally modern humans in Europe and suggests contemporaneity with Neanderthals in other parts of Europe, showing that behaviorally modern humans and Neanderthals shared this region longer than previously thought. Additionally, the results suggest that the early modern human settlers, who may have come from the warmer environments in southern Europe, were well-adapted to a variety of climates, according to the authors.

Modern humans dispersed into Europe and replaced Neanderthals at least 40 thousand years ago, but potentially much earlier. "The problem is that we have practically no human remains associated with the early Upper Palaeolithic in Europe, so we have to use archaeological proxies to figure out when the first modern humans appeared. We have some clearly modern human remains associated with the Aurignacian culture, so we think it is a good indicator for modern human presence," explains Bence Viola. "At Willendorf, we could date the early Aurignacian to 43,500 years, quite a bit earlier than elsewhere and overlapping with directly dated Neanderthal remains," says Philip Nigst.

Neanderthals' capabilities are still hotly debated. Some argue that before modern humans replaced them, Neanderthals showed cultural capabilities similar to those of modern humans, while others make a case that these similarities only appear once Neanderthals came in contact with modern humans. "The new data from Willendorf clearly shows that modern humans were present in what is now Austria while Neanderthals still occupied other regions of Europe suggesting that the two species met, and may have exchanged mates and ideas", explains Philip Nigst. "This means the changes in the material culture of some of the last Neanderthal groups are most probably related to direct or indirect contact with modern humans," says Jean-Jacques Hublin, director of the Department of Human Evolution at the Max Planck Institute for Evolutionary Anthropology.

This section at Willendorf II shows the succession of brown paleosols (medium-cold steppe environment) and yellow loess (cold periglacial steppe to deep frost environment). Holes in the section are sample holes. Credit: The Willendorf Project, Philip R. Nigst and Bence Viola
The stone tools were discovered in a sequence of sediments that were deposited during different colder and warmer phases within the last glacial. Based on the type of soil and its mollusk assemblage, climatic conditions during the time of modern human occupation were likely cool, with a steppe-like climate and some conifer trees along river valleys. "Mollusks are great for environmental reconstruction because they are so sensitive to changes in temperature and moisture – meaning that the species you find vary with every little change in climate," explains Bence Viola. "What is particularly interesting is that the Aurignacian at Willendorf occurs in a relatively cold period, which shows that these earliest settlers were already adapted to different climates requiring different subsistence strategies," says Philip Nigst.