A trove of medieval jewelry and other precious objects found by a man working in his backyard includes pieces made for a royal court and may be worth as much as 100,000 euros ($150,000) government experts said Monday. 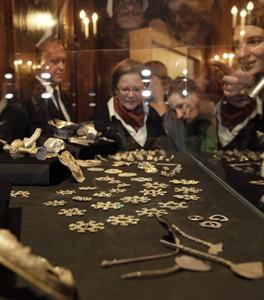 The officials from Austria's department of national antiquities and the Academy of Sciences said they were only at the beginning of their investigation into the provenance and other details of the find.

"We have in front of us high-end products (made) for the highest consumer class of Central Europe" of the Middle Ages, academy member Thomas Kuehtreiber told reporters as security guards lifted a black velvet cloth from a glass case to reveal some of the rarer pieces. 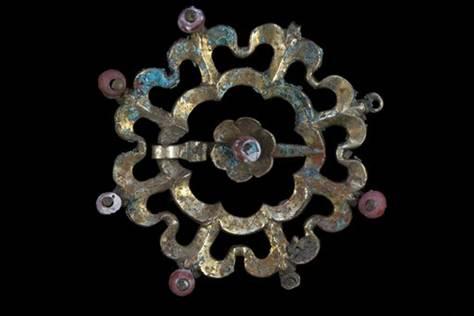 The Federal Office for Memorials said the trove consists of more than 200 rings, brooches, ornate belt buckles, gold-plated silver plates and other pieces or fragments, many encrusted with pearls, fossilized coral and other ornaments. It says the objects are about 650 years old and weigh about 6.6 pounds (3 kilograms).

Some of the more stunning objects on display Monday included a delicately formed brooch adorned with pearls and coral and a ring inlaid with an amethyst-like semiprecious stone. 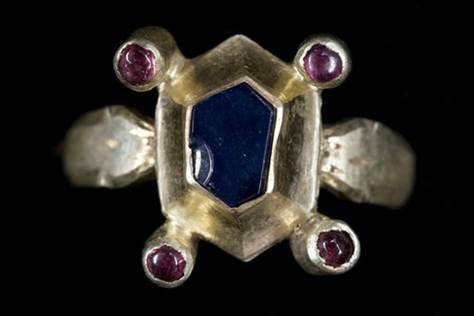 A media statement said the find was tentatively valued at tens of thousands of euros. Employees with the memorials office told The Associated Press they could be worth as much as 100,000 euros or nearly $150,000. They asked not to be named because they were not authorized to speak to media.

The memorials office said the man, who did not want to be identified, came across the objects in 2007 while digging in his back yard in the town of Wiener Neustadt, south of Vienna to expand a small pond. But he did not report it to authorities until after rediscovering the dirt-encrusted objects in a basement box while packing up after selling his house two years ago.

Officials presenting the pieces did not say when the finder first came to them with the ancient trove. They said that investigations into the find had only begun and could last up to four years.

They speculated that the objects could have been plunder from a conflict or owned by a trader who had buried it for safety ahead of approaching potential customers to make a deal.

The location of the find lies on an important medieval trading route that ran between Poland and Italy, they said.

"We will probably never find an answer" to the treasure's origins, said Nikolaus Hofer of the memorial office.