History and archaeology offer hints that religion really did shape the earliest complex societies. Conventional wisdom says that the key to settling down in big groups was agriculture. But “agriculture itself is a wildly improbable cooperative activity,” notes Slingerland, who studies ancient China. “Especially in places where you can’t get agriculture off the ground without large-scale irrigation or water control projects, the cooperation problem has to get solved before you can even get the agriculture ramped up.” That’s where religion came in, he and Norenzayan think. 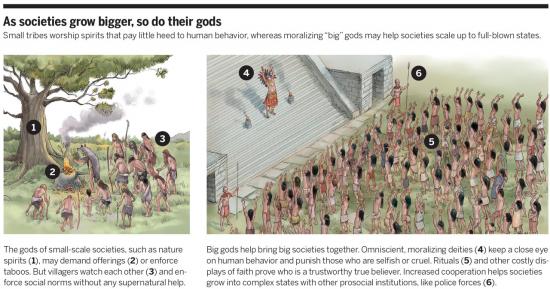 A case in point, they say, is Göbekli Tepe, an archaeological site in southeastern Turkey. Huge stone obelisks carved with evocative half-human, half-animal figures dot the 11,500-year-old site, which the late Klaus Schmidt of the German Archaeological Institute, who excavated there, called “the first manmade holy place” (Science, 18 January 2008, p. 278). Moving and decorating the great obelisks must have required a huge community effort. But signs of agriculture don’t appear nearby until 500 years later, meaning that the builders of Göbekli Tepe were likely hunter-gatherers who had come together to practice shared religious beliefs, Slingerland says. As Schmidt has said, “First came the temple, then the city.”

The big gods hypothesis also helps explain why a handful of religions spread widely: They offer new adherents expanded opportunities for economic and social cooperation. The Orma herders of East Africa, for example, maintained their animist beliefs for centuries while living in close contact with Muslim friends and business partners. Then, in the latter half of the 19th century, war ruined the Orma’s local institutions and weakened their control of the regional ivory and livestock trades. Within a few decades, the entire Orma society had converted to Islam. And once they did, they were inducted into a worldwide network of long-distance traders, bound together by the trust that a shared faith in a moralizing god provides.

The Orma had to do more than profess their newfound faith. They had to show they meant it by giving up pork, eschewing alcohol, reforming their rules about polygamy, and praying five times a day. These “costly displays of faith” are “markers that you’re a true believer in Islam” and therefore are likely to keep your word, especially to your fellow Muslims, Henrich explains. Whether they take the form of generous donations to the church or painful body modifications like circumcision or scarification, these displays prove to others that you are truly committed to your religion and thus can function as a shorthand for trustworthiness.

After their conversion, the Orma “missed their days of drunken bashes,” an aspect of many earlier local rituals, says economic anthropologist Jean Ensminger of the California Institute of Technology in Pasadena, who spent several years with them doing fieldwork. But a religion that opened up access to economic and social networks all over the world, while ensuring everyone in that network adhered to the same standards of behavior, was “a pretty good package,” she says.

Islam’s spread to the Orma is an example of a broader pattern, Norenzayan says. Groups with “moralizing, interventionist deities or spirits … expand because all things being equal, they do better than the noncooperative groups,” he says. “And then the beliefs expand” alongside them. “Take this idea to its extreme and we get world religions,” he says, such as Islam, Christianity, Buddhism, and Hinduism.

Many scientists are impressed by the careful combination of laboratory experiments and suggestive evidence from the ethnographic and historical records that Norenzayan and his team have marshaled. But others question whether moralizing high gods require a special explanation beyond the cognitive byproduct model. “In the same way you don’t need any adaptation for people to believe in supernatural agents, you don’t need any adaptation to explain why people believe in moralizing religion,” says Nicolas Baumard, a psychologist who studies the evolution of religion at the École Normale Supérieure in Paris. All you need, he argues, is a sufficiently affluent society in which people can afford to prioritize long-term goals (like the afterlife) over short-term needs. Studying Eurasian societies between 500 B.C.E. and 300 B.C.E., Baumard recently found that moralizing religions were much more likely to emerge in societies where people had access to more than 20,000 kilocalories in total energy resources each day, from food, fuel, and draft animals, for example.

TO PROVE THAT MORALIZING religion is an adaptive tool to increase cooperation, the big gods team needs to confirm that belief in prosocial deities actually causes followers to be nicer to each other. To that end, Norenzayan and Henrich have expanded their experimental work on religion and generosity to societies around the world. They hope to show that the more omniscient and punitive the gods that people worship, the more money they are willing to give to strangers in their own religious community. The researchers expect to publish the first results this fall.

They are also seeking more evidence for the claim that moralizing religion lays the foundation for large-scale societies. Slingerland is appealing to his historian colleagues to contribute to a new database that will assemble quantitative data about social complexity and religion (see sidebar, p. 922). “If we find there’s a systematic pattern where most societies in the world scaled up without religion, I would worry,” Norenzayan says. “I would say that’s a falsification of the hypothesis.”

Other scientists say some historical evidence already challenges it. This spring, a study in the Proceedings of the Royal Society B reported that out of 96 traditional Austronesian societies spread throughout the Pacific, six had moralizing high gods—and they emerged after the societies became politically complex, not before, apparently contradicting the big gods idea. Norenzayan points out, however, that the complexity of most of the cultures analyzed is limited—they are small-scale chiefdoms, not large agricultural societies. “You see moralizing gods when you get to a state-level society,” he says. “But there could be lots of intermediate cases”—nature spirits that enforce taboos protecting shared resources, for example.

A third test of the big gods hypothesis is whether it accurately predicts which religions spread. The Mormons, for example, have had spectacular success spreading a faith focused on a judgmental god with strict moral rules, a strong cooperative ethic, and costly signs of devotion like avoiding caffeine and spending 2 years as a missionary. “It almost seems like Joseph Smith [founder of the faith] read our article” on big gods, Slingerland jokes. The team plans to use Mormonism as a template for identifying other highly prosocial religions throughout history, quantitatively recording its features and systematically searching for them in other faiths. If many of those religions also prove to have spread rapidly, that could point to a deep pattern.

Critics complain that the definition of a “moralizing” religion can be slippery. Baumard quibbles with Norenzayan’s interpretation of ancient Egyptian beliefs, in which “stopping the flow of water” appears to be a sin. To Baumard, this is clearly not a moral concern, but some kind of taboo. The big gods team is “projecting a moralizing aspect onto gods that don’t care about morality,” he says.

Slingerland disagrees. Ancient Egypt’s agriculture was exquisitely calibrated to the Nile’s annual flood. If someone tampered with the irrigation system for short-term personal gain, the whole society would suffer. In the context of that society, religious injunctions against interfering with the Nile “are absolutely moral,” he says.

Only Maat may have the insight to resolve that debate once and for all. In the meantime, these researchers may have found a new way to get closer to a fuller understanding of religion, from ancient Egypt to today: Hypothesize, test, and repeat.