Why the Vikings migrated to Greenland ?

Why did the Norsemen cross the Atlantic to settle Greenland in the Middle Ages? Was it the possibility of profiting from the coveted trade in walrus tusks that drove them? (Photo: Shutterstock)

Walrus tusks. They may not mean a lot to us these days, but 1,000 years ago in the early Middle Ages, it was a rare commodity that was valuable enough to be a gift fit for a king.

But was it enough to motivate people from northern Europe to uproot their entire lives and sail thousands of kilometres across the Atlantic sea to settle down in Greenland--just to get a share in the lucrative walrus tusk trade?

Archaeologists have asked themselves this for years, but the answers have been elusive as concrete archaeological finds and written sources simply do not exist.

But now a group of researchers have developed a new method that could finally crack this archaeological mystery.

"One big question is: ‘where were the walruses caught?’” says Karin Margarita Frei, a senior scientist at the National Museum of Denmark. “We’ve found walrus tusk ivory in many places, and we know that there must’ve been some trade. But, biologically speaking, Greenlandic and Icelandic walruses are similar, which makes it impossible to investigate these trade routes.

Frei has pioneered a new method, which makes it possible to discern between these two walrus populations.

“For the first time we now have a promising tracking system. It’s huge and somehow a little surreal," says Frei.

"Now we know that there is an answer out there, and how we can find it. For us it is a major breakthrough," says co-author Søren Sindbæk, an archaeologist and professor of medieval and renaissance archaeology at Aarhus University, Denmark.

The new method has just been described in the journal World Archeology.

A brand new opportunity to map the trade routes

Frei is famous for having developed a method, which uses strontium to reveal where a person has lived and travelled in certain periods of their life. She used this same method earlier this year to prove that the ancient Danish skeleton, the Egtved Girl, was not actually from Denmark.

Strontium is transmitted to us through food and water many countries have a unique strontium isotope signature, which makes it possible to track peoples’ movement throughout their lives. Unfortunately, strontium isotopes in seawater are the same throughout all the world's oceans, and so the method is useless to show where a walrus tusk came from.

But a group of Canadian researchers discovered that you can see differences between modern walruses by examining lead in their tusks. This opened up a door for Frei. 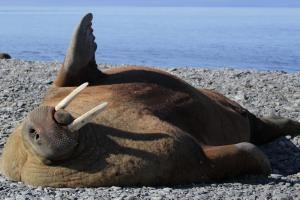 Walrus tusks were in high demand in the Middle Ages. They were used to make jewellery, game pieces, and religious carvings, and were considered fit for a king. (Photo: Shutterstock)

Together with her husband, Professor Robert Frei from the University of Copenhagen, Denmark, and Dr Ashley Coutu, a bio-archaeologist at Aarhus University, Denmark, she started to investigate whether the same could be done in walrus tusks as old as 1,000 CE.

"This is the first time we can look at archaeological samples of walrus tusks and say something concrete about where they came from. It opens up a whole new opportunity to map Viking trade routes," says Frei.

Previous archaeological finds showed that the walrus ivory trade was a key commodity for the Greenland Vikings, the so-called Norsemen.

"Walrus ivory has been valuable all the way back to Roman times, but people become really aware of it during the Viking era," says co-author Jette Arne Borg, curator at the National Museum of Denmark and a leading expert in the Norsemen.

"Walrus ivory has been crucial to life in Greenland and had a major part in trade, which doesn’t say much as they probably had many other exotic things to trade, such as the polar bear skins and white hunting birds," she says.

Most archaeologists think walrus were hunted for their tusks from very early on in Greenland and, presumably, some of this was for international trade. But how much? According to Sindbæk, this is a major sticking point, which has big implications for the human history of Greenland.

Were the tusks a rare commodity that grew over time, or were they part of a massive international trading route from the outset of the Greenland colony?

“If it's something that's widely traded from the beginning of the Norse settlements in Greenland then this trade must’ve been an important incentive behind the great voyages of discovery across the North Atlantic and the colonization of the Arctic," says Sindbæck.

Archaeologists agree that the trade in walrus tusks between Greenland and northern Europe was well established by 1,200 to 1,300 CE. Now they will be able to see whether there is clear evidence to support an earlier date of 1,000 CE.

"Whether it [the trade] occurred gradually over time, or whether it helped to drive the colonization [of Greenland], is one of the big mysteries of the Nordic Middle Ages,” says Sindbæk.

The existence of a major European trading network operating out of Greenland would indicate more than just a desire to see a new country, explains Sindbæk.

“We have a tendency to view the Norse in Greenland as an isolated people on the edge of the world--but in fact it has been a society which from the beginning has had close associations with the vibrant life of trading towns around Europe," he says.

Scientists will measure lead in Disko Bay, Greenland, to see if it was a major hunting ground for Walrus in the Middle Ages. (Photo: Shutterstock)

European museums are full of walrus ivory artefacts. In the Middle Ages it was a popular material used in fine jewellery, small utensils, and religious carvings.

But around 1000 CE there was a great explosion of artworks using walrus ivory, and this coincides with the discovery of Greenland, says Else Roesdahl, a professor emerita of medieval archaeology at Aarhus University, Denmark.

Roesdahl was not involved in the new study but has advocated for 20 years that the expansion of the Walrus trade was a driving force behind Viking migration to Greenland.

"The reason why we were so interested in walrus ivory works of art was that it was difficult to obtain ivory at the time. We can speculate that it’s not until the discovery of Greenland that the Walrus trade really takes off," says Roesdahl.

Previous archaeological findings reveal that there were some walruses in Iceland during the Middle Ages, but stocks were tiny compared to the much larger ones around Disko Bay in Greenland.

Perhaps small-time hunting of walrus in Iceland was a precursor to a more structured trade established by 1000 CE by the opportunistic Norsemen when they settled Greenland three or four generations later.

The mystery should be cleared up when researchers determine where the various walrus tusk artefacts currently housed in museums throughout northern Europe actually came from.

Roesdahl has high hopes that the new method will help make this possible.

"It bodes well for the future,” she says.