Why Are Jews Called Jews?

The word 'Jew' originates with the ancient Israelite kingdom of Judah, but what its name means is a matter of great controversy. It could even mean 'Thank God'. 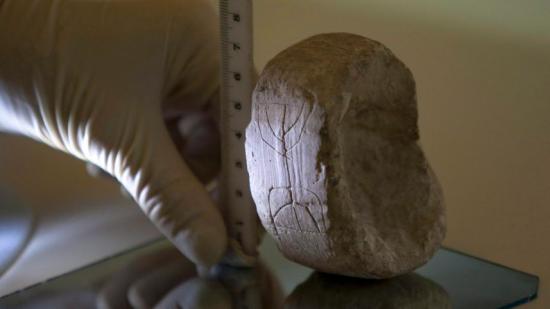 A menora carved on stone found in a 2,000-year-old drainage tunnel leading to the Old City of Jerusalem.AP
The word “Jew” ultimately comes from Judah, an ancient kingdom centered in Jerusalem, in the 2nd century BCE. But how did the kingdom's Hebrew name, Yehudah (Judah in English), pronounced ye-hu-DAH, beget “Jew”?
The earliest reference to the Kingdom of Judah is in a clay tablet found in Nimrud, the capital of the mighty Assyrian Empire (and now a heap of ruins in northern Iraq after ISIS obliterated the ancient city). The tablet, Kalhu Palace Summary Inscription 7, dating from approximately 733 BCE, describes the military exploits of King Tiglath-Pileser III of Assyria. On this list of the kings and kingdoms he vanquished is: “Jehoahaz of the land Judah”.
Clearly, that refers to King Ahaz’s run-in with the Assyrians, described in 2 Kings 16.
Before we see how the name of an ancient kingdom called Yehudah ” morphed into an ethno-religious group called “Jews,” we should see how the kingdom got its name in the first place.
For the sake of good order: The original Israelite kingdom was called Judah. During the Persian Period the land became a province of that empire, called Yehud; then in the Roman Period, the land became a Roman province called Judea. But let us discuss the first of those successive entities. 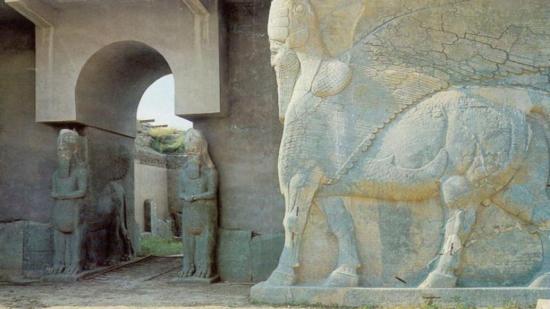 The earliest reference to the Kingdom of Judah was in a clay tablet found in Nimrud - the ancient Assyrian capital destroyed this year by ISIS. Shown: The palace in Nimrud.M.Chohan, Wikimedia Commons
Lost in translation
According to the Bible, the kingdom was named after the tribe from which it arose. That tribe was Judah, which was in turn was named for its eponymous progenitor- Judah, Jacob's fourth son.
As is the case with his brothers, the Bible explains Judah's name based on a pun, which is totally lost in translation: “And she conceived again, and bare a son: and she said, Now will I praise the Lord: therefore she called his name Judah” (Genesis 29:35). The phrase the King James Bible renders “will I praise” is o-DEH, which really means “will I thank”. If the name is a concatenation of yehu, an abbreviated form of the divine name, and udah, the verb “thank,” which would mean the name means “Thank God.” 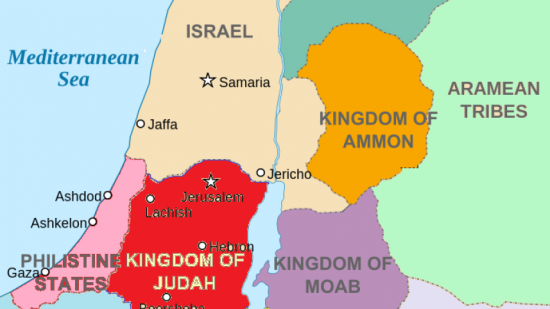 Map Wikimedia Commons, elaboration by Haaretz
Many modern biblical scholars reject the biblical account as mere fiction that developed over the ages, mainly  to explain the relationship between the tribes, especially why Judah should lord it over the others. So if Judah the ancestor never existed, how did the tribe come to be called by that name?
The scholars do agree with the Bible that the first half of the name is the abbreviated form of the divine name. Where they differ is on its second half.
The American archaeologist William F. Albright hypothesized that odeh is a verb meaning “led”, from the root YDH – which exists in Arabic, a related language, though not in Hebrew. Thus, according to Albright, the tribe’s name means “led by Yahweh.”
The Jewish German philologist Julius Lewy, on the other hand, thought that the name meant “Yahweh’s” (people), arguing that the “d” in the name was the Hurrian language’s possessive case ending. Both these explanations seem unlikely.
Judah is destroyed
However Judah got its name, it didn’t last long. In 586 BCE, the kingdom was overrun and destroyed by the Babylonian Empire and the Israelite elites were exiled to Babylon.
In 538 BCE, Cyrus the Great decreed that the Israelite exiles could return to their land, which was restructured as a semi-autonomous Persian province named Yahud.
For the next 700 years, Jerusalem and its environs maintained some version of this name as the land passed from ruler to ruler. This ended when the Bar Kochba revolt was crushed in 135 CE. The Romans threw out the Jews and renamed the region Syria-Palestine. 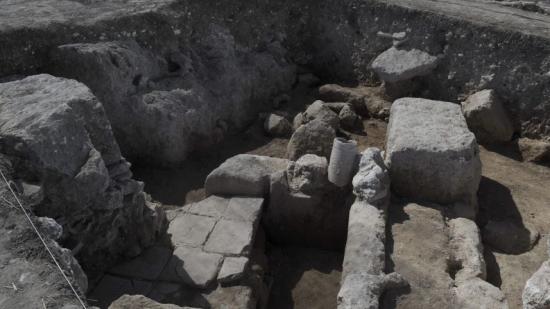 An ancient Roman army camp at Armageddon, locally known as Megiddo, from about 2,000 years ago.Eli Posner
But while the region was no longer designated by the Latin name IVDÆA, the ethno-religious group that traced its origins to it spread throughout the Roman Empire, and received an appellation designating them as people from there -  iūdaeus. This Latin word came from the equivalent Greek word ioudaios, which in turn came from the Aramaic yehudai, which in turn came from the Hebrew yehudi - Judean.
But what does all this have to do with the English word “Jew”?
The Dark Ages descend
As the Roman Empire fell apart and Europe descended into the Dark Ages, in the 4th and 5th centuries CE, the Latin spoken in the Roman province of Gaul slowly turned into what linguists call Old French. Latin words beginning with the letter "i" began to be pronounced like the letter "j" (which didn’t exist at the time). Later, during the following centuries, the name iūdaeus became gradually truncated. By the 10th century, the French word for Jew was pronounced judeu. A century later, the word morphed into juiu.
Meanwhile, in 1066, a group of French-speaking Norman aristocrats, led by William the Conqueror, seized control of England.
The Normans not only brought French to England: they also brought over Jews, who made England their permanent home for the first time, at least in appreciable numbers. The new foreign people were known by their French name - at the time - juiu (after the Norman Conquest, French tacked on an “f” to end of their word, making it Juif today).
The oldest English use of “Jew” on record, according to the Oxford English Dictionary (which is where one looks up this kind of thing) is from roughly 1275: “Pilates hym onswerede, am ich Gyv þenne?” It is a translation taken from the New Testament: "Pilate answered, Am I a Jew?" (John 18:35).
The spelling of Gyv underwent some changes over time, one being that u and v became distinct in the late 14th century.
In the following centuries, several variations appear: Ive, Iewe, Iew and more. Eventually, in the 17th century, the letter J appeared in English as a way to distinguish between i pronounced as we do, which comes from Germanic sources (e.g., island) and those of French origin, pronounced like a soft G. Since "Jew" fell into this latter category, it began to be spelled with a J. The first known instance of this spelling is in Richard Brinsley Sheridan's comedy of manners "The Rivals", in 1775: “She shall have a skin like a mummy, and the beard of a Jew.”
And that is how we have been spelling it ever since.