Who Were the Ancient Bog Mummies?

Ongoing research suggests at least two 2,000-year-old corpses had traveled before their deaths.

Tollund Man, who was hanged with a leather cord and cast into a Danish bog, is housed at Denmark's Silkeborg Museum. PHOTOGRAPH BY ROBERT CLARK, NATIONAL GEOGRAPHIC

Cast into northern European wetlands, bog bodies have long appeared as opaque to archaeologists as their dark and watery graves. But new clues are coming in the centuries-old mystery of their origins.

Over 500 Iron Age bog bodies and skeletons dating to between 800 B.C. and A.D. 200 have been discovered in Denmark alone, with more unearthed in Germany, the Netherlands, the United Kingdom, and Ireland.

Much of the bodies' skin, hair, clothes, and stomach contents have been remarkably well preserved, thanks to the acidic, oxygen-poor conditions of peat bogs, which are made up of accumulated layers of dead moss.

Tollund Man, for example, found in 1950 on Denmark's Jutland Peninsula and perhaps the most famous bog body in the world, still "has this three-day beard—you feel he will open his eyes and talk to you. It's something that not even Tutankhamun could make you feel," said Karin Margarita Frei, a research scientist who studies bog bodies at the National Museum of Denmark.

In Denmark, about 30 of these naturally mummified corpses are housed in museums, where scientists have worked for decades to figure out who these people were and why they died.

Because some bear horrific wounds, such as slashed throats, and were buried instead of cremated like most others in their communities, scientists have suggested the bodies had been sacrificed as criminals, slaves, or simply commoners. The Roman historian Tacitus started this idea in the first century A.D. by suggesting they were deserters and criminals.

But ongoing research is uncovering an entirely new dimension: When alive, these people of the bog may have instead been special members of their villages, which in the early Iron Age were loosely scattered across Denmark.

New chemical analyses applied to two of the Danish bog bodies,Huldremose Woman and Haraldskær Woman, show that they had traveled long distances before their deaths. What's more, some of their clothing had been made in foreign lands and was more elaborate than previously thought.

"You sacrifice something that is meaningful and has a lot of value. So maybe people who [had] traveled had a lot of value," Frei told National Geographic at the Euroscience Open Forum in Copenhagen in June. 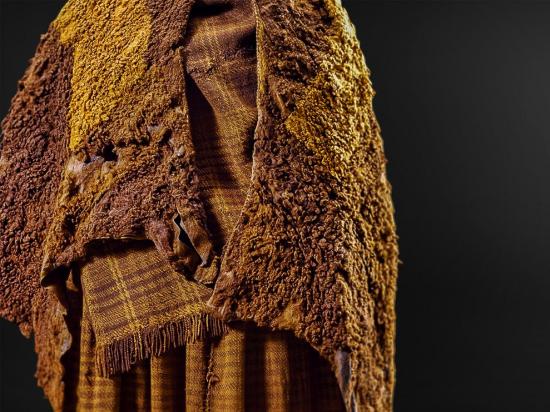 Analysis of Huldremose Woman's leather cape and woolen scarf and skirt show that the clothing had been made outside of Denmark. PHOTOGRAPH COURTESY OF THE NATIONAL MUSEUM OF DENMARK

For Europeans dating as far back as the Neolithic period 6,000 years ago, bogs were both resources and possibly ominous supernatural portals, according to Ulla Mannering, an expert in ancient textiles at the National Museum of Denmark.

The bogs' peat, which could be burned for heating homes, was valuable in tree-scarce Denmark, and an ore called bog iron was made into tools and weapons.

Among prehistoric people, "when you take things, you also offer things," said Mannering.

This may be why the Danish villagers would deposit "gifts" of clothes, old shoes, slaughtered animals, battered weapons, and, for a period of 500 years, people into the black abyss of the bogs.

When peat harvesters began accidentally unearthing bog bodies in the mid to late 1800s, many were discovered without clothing, solidifying the view that they had been simple people, Frei said.

Tollund Man, for instance, was found with a belt but no clothes. "It doesn't make sense to be naked and have a belt," Frei pointed out.

Frei wondered, then, if some of the bog bodies' clothing had dissolved in the bogs over the centuries. So she decided to examine Huldremose Woman, a mummy discovered in 1879 wearing a checkered skirt and scarf, both made of sheep's wool, and two leather capes.

Using microscopes, she discovered that tiny plant fibers were stuck to the 2,300-year-old woman's skin—remnants of ancient underwear, which later analyses revealed were likely made of flax.

Next, Frei performed a first-of-its-kind analysis of the strontium isotope contained in the flax and in the wool from the skirt and scarf.

Researchers analyzed the isotopes, or different varieties, of atoms in the strontium preserved in the flax and wool fibers. These atoms provide a chemical insight into the geology of the region where the plant and sheep lived.

The results show that the plant fibers taken from threads of the underwear grew on terrains geologically older than those of Denmark—those typical of northern Scandinavia, such as Norway or Sweden—suggesting that Huldremose Woman may have come from somewhere else, according to research published in 2009 in the Journal of Archaeological Science.

Frei also did an analysis of strontium isotopes in Huldremose Woman's skin. Humans absorb strontium through food and water, and it's especially prevalent in our teeth and bones—though many bog bodies are found without teeth and bones because of the acidic conditions. 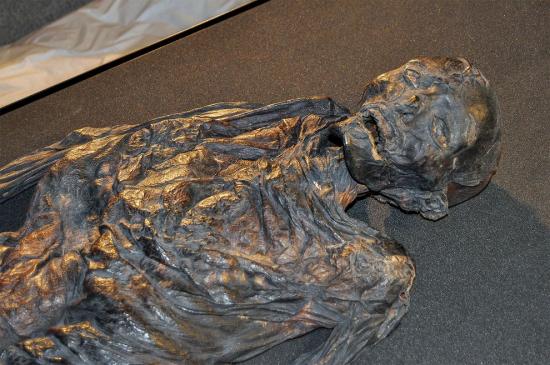 Haraldskær Woman, who is kept at Denmark's Vejle Museum, was first thought to be a Norwegian queen. PHOTOGRAPH COURTESY OF VEJLE MUSEUM 2013

The research revealed that Huldremose Woman's body contained strontium atoms from locales outside Denmark—showing she had traveled abroad before she ended up in the bog.

Another study published in 2009 by Mannering revealed that Huldremose Woman's woolen garments—turned brown by the bog—were originally blue and red: Dyed clothing is a sign of wealth, she says. Mannering and colleagues also found a ridge in Huldremose Woman's finger that may have indicated it once bore a gold ring before it disintegrated in the bog.

"At first we thought this must be a witch—now we think she's a very fine lady with expensive jewelry and expensive clothes and underwear," Frei said.

"It had been overlooked that there is such a wealth of resource in these textiles and skin," Mannering added.

What's more, the research shows that early Iron Age cultures of the centuries just before and after Christ were more interconnected than thought, Frei said.

For instance, wool and plant fibers were either traded or brought as raw materials for textiles more commonly and over longer distances than previously assumed, according to Frei's research.

"This was seen as a period where society was very closed—not much trade with the outside world," she said. "Suddenly we can see, yes, there was."

Lotte Hedeager, an expert in Iron Age archaeology at the University of Oslo in Norway, agreed, noting that "these results require a rethinking" of the communication and trade networks among northern European cultures in the early Iron Age.