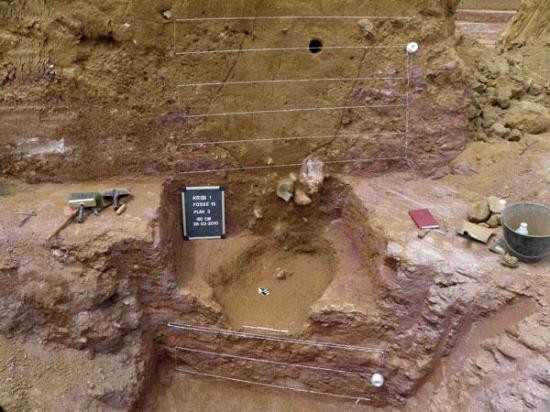 It is a much debated question: why did Central African forests become partially fragmented between 2,500 and 2,000 years ago, leaving room for more open forest landscapes and savannah? Recently, a publication attempted to explain that it was the farming Bantu peoples who were responsible for this, through the large-scale clearing that they undertook. But several IRD experts and their partners (1) contest this argument inScience magazine. The fragmentation of the Central African forest was the result of drastic climate change. In fact, during this period a phase of general desiccation spread from the equatorial region right to the edges of the Sahel. Numerous data show that it was only 500 years later, in other words some 2,000 years ago, that Bantu colonisation became widespread.

The first Bantu populations therefore merely took advantage of the opening up of the forest to enter these areas and start growing their crops.

Did the first Bantu farmers who colonised the forests of Central Africa 2,500 years ago, also clear the land on a large scale, as was recently put forth? Or did they simply take advantage of a drastic climate change that fragmented the forests and made it easier for them to enter these parts? Several IRD experts and their partners (1), archaeologists, paleo-environmentalists and palynologists (2), defend the climate theory in Science magazine.

The ancestors of the Bantu started settling 4,000 years ago from the northern edge of the forest down to the coastal grasslands of Gabon. They practiced pottery and stone polishing, and cleared small parts of the forest fringe for slash-and-burn farming. But there were few of them and their impact was slight. When the major fragmentation of forests started 2,500 years ago, the Bantu had only just learnt to use iron: it was the beginning of the Iron Age.

A boom period for the Bantu

The concentration and spreading of archaeological records – more than 500 radiocarbon dates established on pottery, stone or iron tools – show that the massive colonisation of the Congo Basin by Bantu farmers started only 2,000 years ago, and that it reached a peak between 1,900 and 1,600 years ago. At the same time, all the available paleo-environmental data indicate a new phase of forest expansion that also started about 2,000 years ago depending on the regions, proving that growing Bantu settlement did not prevent the vegetation from flourishing. The young civilisation simply took advantage from the opening up of the forest to enter it more easily.

The extent of forests has varied greatly over the past 11,000 years

Durant the early and mid-Holocene, in other words between 11,000 and 4,000 ago, much more of the earth was covered by forests than today. During this period, monsoons brought abundant, well distributed rainfall throughout the year. But according to various geological and palynological data, a first significant reduction of forest areas began some 4,000 years ago, making place for savannah. This phenomenon was caused by a sudden decrease in monsoon rains which paleoclimatologists attribute to a drop in water surface temperatures in the Gulf of Guinea (3). However, the reduction in rainfall did not affect the heart of the great forests.

Sediment and pollen records as well as the analysis of plant remains found on archaeological sites show that another disturbance occurred 2,500 years ago. Much more significant than the previous one, it had a strong impact on Central African forests, with the spreading of pioneer trees and herbaceous plants that are typical of degraded forests and the appearance of savannah. The strong erosion associated with this phenomenon indicates that it was caused by dominant storm rainfalls and a shortened wet season. Due to the erosion caused by this type of rainfall over several centuries, many ancient soils were laid bare and “washed out”. Sediments carried away by the Congo River became very rich in aluminium and potassium as a result. It was the discovery of this high concentration in submarine deposits of the Congo River that led to the erroneous theory of “anthropological” intervention as an explanation for deforestation in Central Africa.

Present-day human activities often have a devastating impact on the environment, due to the strong geographic expansion of populations. However, in past ages, such activities cannot necessarily bare the blame for something like the major ecological disruption that affected forests in Central Africa between 2,500 and 2,000 years ago. Research by archaeologists and paleontologists in fact shows that the extent of Bantu settlement was very small during this period and could therefore not have caused such a major disturbance. Only a profound change in the climate pattern of the entire sub-region could bring about such a change in the landscape.

(1)   From CNRS, Cirad, the Universities of Montpellier, Perpignan and Strasbourg in France, Frankfurt and Tübingen in Germany, Gent and Brussels in Belgium, Melbourne in Australia, Geneva in Suisse, Stony Brook in the USA, Newcastle in the United Kingdom, and Herbier National in Cameroun, and various research institutes in Cameroun and Gabon.

(3)   Associated with the start of the rain season.

The above story is reprinted from materials provided by Institut de Recherche pour le Développement (IRD).