Were Vikings really dirty savages who wore horned helmets, or did they look like we do today? Here’s what the experts say. 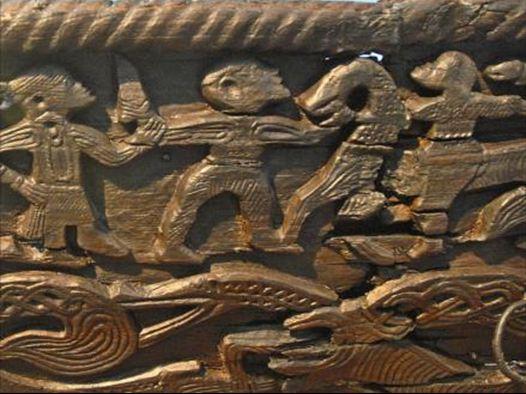 The fine decoration of the Oseberg ship in Norway, which was buried in the year 834, provides clues to what Vikings looked like. Inside the ship were two women and the archaeologists believe the ship has served as a sarcophagus. (Photo: Annie Dalbéra)

There’s no shortage of myths about the appearance of our notorious Viking ancestors.

To find out more about these myths, ScienceNordic’s Danish partner site, videnskab.dk, asked its Facebook readers to list their favourite myths about what the Vikings looked like.

We have picked out five myths from the resulting debate and asked researchers to help us confirm or bust these myths.

Armed with this information, our graphic designer then took a shot at drawing some examples of our infamous forefathers, which you can see in our picture gallery.

The five myths are:

MYTH 1: Vikings were dirty and unkempt

Unwashed, rough warriors with froth hanging out of the corners of the mouth. Popular culture portrays the Viking as a somewhat filthy person.

But that’s unlikely to be true: 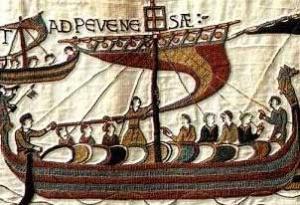 Historians also use the famous Bayeux Tapestry as a source when trying to determine what the Vikings looked like. The tapestry depicts the Battle of Hastings in 1066.

The finds suggest that cleanliness meant a lot to the Vikings. Written sources from medieval England also back up this view. In his chronicle from 1220 – a couple of centuries after the Vikings had ravaged England – John of Wallingford described the Vikings as well-groomed heartbreakers:

”They had also conquered, or planned to conquer, all the country’s best cities and caused many hardships for the country’s original citizens, for they were – according to their country’s customs – in the habit of combing their hair every day, to bathe every Saturday, to change their clothes frequently and to draw attention to themselves by means of many such frivolous whims. In this way, they sieged the married women’s virtue and persuaded the daughters of even noble men to become their mistresses,” wrote Wallingford.

There are, however, sources that paint a contrasting picture:

“The Arab ambassador IBN Fadlan, who met a group of Vikings on the Volga, described them as the filthiest of Allah’s creatures,” says Henriksen.

“But the Arabs were Muslims and came from a culture where people were supposed to bathe before each of their five daily prayers, whereas the Vikings may only have bathed once a week.”

It wasn’t enough just to be clean. The hair also had to be styled right. 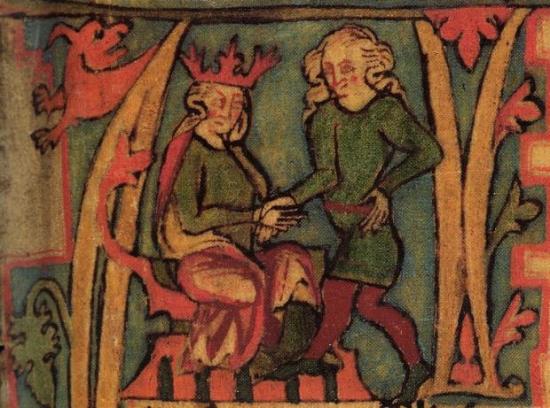 The Vikings typically lived to be around 40-50 years old. But there are also examples of upper class Vikings who lived longer – for instance Harald Fairhair, who was King of Norway for more than 60 years. (Picture of King Harald from the 14th century Icelandic manuscript Flateyjarbók.)

“From picture sources we know that the Vikings had well-groomed beards and hair. The men had long fringes and short hair on the back of the head,” she says, adding that the beard could be short or long, but it was always well-groomed. Further down on the neck, the skin was shaved.

One is a three-dimensional carved male head on a wagon in the Oseberg ship burial mound in Norway. The man’s hair is well groomed and he has an elegant long moustache and a chin beard that reaches up to his moustache, but apparently not out to the cheeks.

The second source is an anonymous Old English letter in which a man admonishes his brother to follow the Anglo-Saxon practice and not give in to ‘Danish fashion with a shaved neck and blinded eyes’. Blinded eyes probably meant a long fringe.

The women’s hair was usually long. It was probably tied into a knot on the back of the head, and the knot may have been decorated with coloured tape, which was braided into the hair. The women also wore a bonnet or a scarf around their heads.

When you see a Viking in cartoons, games or in movies, he’s often depicted with a horned helmet on his head. But real Vikings did not wear these horned helmets.

It wasn’t until the end of the 19th century that people started drawing Vikings wearing horned helmets because the villains in a popular Wagner opera wore such helmets.

From picture sources we know that the Vikings had well-groomed beards and hair. The men had long fringes and short hair on the back of the head.

In a real combat situation the horns wouldn’t be very practical as they could easily get entangled in anything that came their way.

When in combat, real Vikings used iron helmets for protection, and they were armed either with ordinary tools or actual weapons such as swords and lances.

Researchers can make estimates about a Viking’s social standing based on the weapons he brought to his grave. Small axes and knives were tools for everyone, but only the elite could afford lances and swords.

“You needed to have a high ranking in society to be buried with a sword,” says Viking weapon expert Peter Pentz, the curator at the Danish National Museum.

“A more ordinary Viking could be buried with his axe or knife, but we cannot say whether the axe and the knife had been used as weapons or as tools. Grave finds have revealed numerous small axes, which might just as well have been used for felling trees as for killing.”

The small axe was a tool that could be carried in a belt just like a knife, but the sword is unlikely to have served any other purpose than to kill.

“The sword was associated with an entirely different prestige. In grave finds that’s a clear indication that we’re dealing with a warrior,” says Pentz.

It’s actually more difficult to determine the gender of a skeleton from the Viking era. The men’s skulls were a little more feminine and the women’s skulls a little more masculine than what we’re seeing today.

The Vikings also used bows, arrows and sharp spears as weapons. For protection they used a round shield, which was lined with leather. These shields were sometimes painted and decorated with simple patterns.

Those who could afford it also used a chain mail to protect the torso. 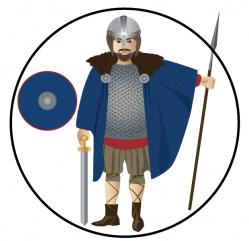 The most privileged Vikings used swords and chain mails when fighting. The ordinary peasant, who rarely entered the battlefields, had to make do with common