What really wiped out the Maya?

We might finally know why the Maya abandoned their impressive limestone cities about 1,000 years ago

When the Spanish conquistadores sailed for Central America in 1517, their goal was to vanquish the resident Maya civilisation. But the colonists arrived to find that much of their work had been done for them.

The Maya’s towering limestone cities – a classic feature of one of the ancient world’s most advanced societies – were already being reclaimed by the jungle.

The question of how the Maya met their end is one of history's most enduring mysteries. The Mayapeople survived; they even managed to stage a long resistance to European rule. But by the time the Spanish made landfall, the political and economic power which had erected the region's iconic pyramids, and had at one time sustained a population of some two million people, had vanished. 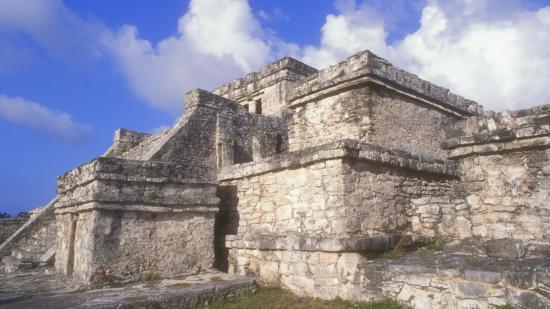 The first Maya sites were built during the first millennium BC, and the civilisation reached its height around AD600. (In the chronology of Mesoamerica, the Maya sit between the earlier Olmec and later Aztec civilisations). Archaeologists have uncovered thousands of ancient Maya cities, most of which are spread across southern Mexico's Yucatan peninsula, Belize and Guatemala.

After about 200 years of serious archaeological study, we know enough about the Maya to be suitably impressed. Their distinctive art and architecture prove that these were master craftspeople.

The Maya were also intellectually advanced. They had a strong grasp of mathematics and astronomy, which they used to align their pyramids and temples with the precession of planets and the solar equinoxes. And they used the only known written script in Mesoamerica, a bizarre-looking set of characters known as Maya hieroglyphs.

The marvels the Maya left behind have earned them an enduring mystique. But the way the civilisation met its end is every bit as curious.

Let’s start with what we know. Around AD850, after centuries of prosperity and dominance, the Maya began to abandon their great cities, one after another. In less than 200 years, the civilisation had slumped to a fraction of its former glory. There would be later isolated resurgences, but the grandeur of the Maya’s heyday was gone forever.

Apart from its dramatic scale, what makes the Maya collapse so striking is that, despite decades of study, archaeologists still cannot agree on what caused it. As with the Roman Empire, there probably wasn’t one single culprit for the Maya’s downfall. But the nature of their decline leads some researchers to believe that the Maya civilisation fell victim to a major catastrophe – one able to topple city after city in its wake.

There are abundant theories about what finished off the Maya. There are the old favourites – invasion, civil war, collapsing trade routes – but ever since the first Central American ancient climate records were pieced together in the early 1990s, one theory has become particularly popular: that the Maya civilisation was ultimately doomed by a period of severe climate change.

In the centuries immediately before the Maya collapse – the so-called “Classical Age” between about AD250 and 800 – the civilisation boomed. Cities flourished and harvests were good. Climate records (which mostly come from the analysis of cave formations) show that during this time the Maya area had received relatively high rainfall. But the same records show that, starting in about AD820, the region was ravaged by 95 years of punctuated droughts, some of which lasted for decades.

Ever since these droughts were first identified, researchers have noticed a striking correlation between their timing and that of the Maya collapse: most of the Classic Maya cities fell between AD850 and 925 – largely coincident with the century of drought. And while a simple correlation isn’t enough to close the case, the tight fit between the droughts and the downfall leads many experts to believe that the 9th Century climate shift might somehow have caused the Maya’s demise.

But attractive as the drought explanation is, one piece of evidence has been standing in its way. Because, while most Maya cities declined as the climate dried, not all did.

The Maya cities which fell during the 9th Century droughts were mostly located in the southern portion of their territory, in modern day Guatemala and Belize. In the Yucatan peninsula to the north, however, the Maya civilisation not only survived through these droughts, it then began to flourish.

While the southern Maya civilisation began to disintegrate, the north enjoyed relative prosperity, with the rise of a number of thriving urban centres. These included one of the greatest of all Maya cities, Chichen Itza (one of the world’s “New Seven Wonders”). This northern resurgence flies against the drought theory of the Maya’s demise: if the south was permanently crippled by the climate shift, critics argue, then why wasn’t the north?

Researchers have proposed various explanations for this north-south discrepancy, but so far no one theory has won out. Recently, however, a new discovery has gone some way towards resolving this enduring paradox.

Maya archaeologists find dating difficult. Almost none of the Maya’s written records, which once numbered in the thousands, survived past colonial times (on the order of Catholic priests, the Spanish burned Maya books wholesale - only four are now known to exist). Instead, to determine the times that ancient Maya cities thrived, researchers rely on calendar inscriptions on stone monuments, stylistic analysis of the Maya’s ornate ceramics, and radiocarbon dates from organic materials.

Earlier studies had already determined the approximate ages of the main urban centres in the northern Maya civilisation; it was these that had revealed that the north had endured the 9th Century droughts. However until recently this haul of data had never been gathered together in a single study. Doing so is important, because it allows the northern Maya region to be viewed as a whole, helping researchers to identify overarching trends in its rise and fall.

Now, in a study published in December, archaeologists from the US and the UK have brought together for the first time all of the calculated ages for urban centres in the northern Maya lands. These comprise about 200 dates from sites across the Yucatan peninsula, half obtained from stone calendar inscriptions and half from radiocarbon dating. The researchers could then construct a broad picture of what times the northern Maya cities had been active, and the times when they each might have fallen into decline.

What the team found significantly changes our understanding of when, and perhaps even how the Maya civilisation met its end. Contrary to previous belief, the north had suffered a decline during a time of drought - in fact, it had suffered two of them.

There was a 70% decline in stone calendar inscriptions in the second half of the 9th Century. This same pattern of decline is also echoed in radiocarbon dates across the northern Maya region, which indicate that wooden construction also dwindled during the same time period. Importantly, this is the time that the droughts are believed to have caused the collapse of the Maya civilisation in the south – evidently the north didn’t come through these droughts unscathed after all.

The researchers believe that this waning of creative activity shows that political and societal collapse was underway in the north. The north certainly fared better than the south during the 9th Century, but these new findings suggest that the region nevertheless suffered a significant decline. This northern decline had previously escaped detection mostly due to the subtle nature of the evidence: a decline in construction, even one as large as this, is hard to spot without the comprehensive, region-wide analysis provided by the new study.

The northern decline of the 9th Century is an intriguing new detail in the Maya’s story, but it doesn’t fundamentally alter it - after all, we already knew that the northern Maya had survived past the 9th Century droughts (Chichen Itza and other centres thrived until well into the 10th Century).

But the second decline the team identified does change our understanding of the Maya’s story. After a short recovery during the 10th Century (which, interestingly, was coincident with an increase in rainfall), the researchers noticed another slump in construction at numerous sites across the northern Maya territory: stone carving and other building activity seems to have fallen by almost half between AD1000 and 1075. What’s more, just like the crisis 200 years earlier, the researchers discovered that this 11th Century Maya decline also took place against a backdrop of severe drought.

And not just any drought. The ones in the 9th Century had certainly been severe. But the 11th Century brought the worst drought that the region had seen for fully 2,000 years - a “megadrought”.

After a short recovery there was another slump in construction in the north – against a backdrop of severe drought. Climate records show that rainfall diminished dramatically for the best part of a century, between around AD1020 and 1100 - a snug fit with the archaeologically derived dates for the collapse of the northern Maya. One correlation doesn’t mean much on its own. But find two, and even sceptics might start to whisper “causation”.

The 11th Century megadrought had been implicated in the fall of the northern Maya before, but the dating techniques used had given ambiguous ages, making it hard to tell if the timings of the two events really did overlap. The comprehensive analysis published in the December study lets us say with much greater certainty that climate change was contemporaneous with not one, but two devastating periods of Maya decline.

If the first wave of droughts had finished off the Maya in the south, it looks like the second wave may have brought on their demise in the north.

After this second wave of droughts there was to be no real recovery for the Maya. Chichen Itza and most of the other important centres in the north would never rise again. There would be small but noteworthy exceptions - such as the northern city of Mayapan which flourished from the 13th to 15th centuries - but these would never rival the size and complexity of the Classic Maya cities. In many ways, the 11th Century was the Maya’s last gasp.

With these findings, it looks even more likely that climate change played a significant role in the Maya’s downfall. But how?

Most archaeological explanations for the collapse involve agriculture. The Maya, like all large civilisations, were heavily dependent on crops for their economic might - and of course to sustain their vast workforce. The simplest explanation for the Maya’s fall is that year-upon-year of low crop yields, brought on by the droughts, may have gradually diminished the Maya’s political influence, eventually leading to full-on societal disintegration.

But even advocates of the drought hypothesis admit that the picture is bound to be more nuanced than that.

“We know that there was already increased warfare and socio-political instability throughout the Maya area prior to the 9th Century droughts,” says Julie Hoggarth at Baylor University in Waco, Texas, who co-led December’s climate analysis.