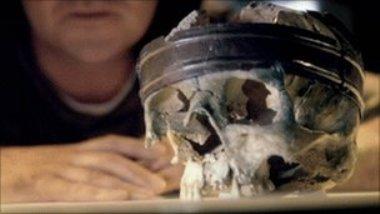 Archeological finds, such as this skull, have shed light on what happened throughout ancient history

A large gap in pre-history could signal that Britain underwent an economic downturn over 2,500 years ago.

In history lessons, the three ages of pre-history - Stone Age, Bronze Age and Iron Age - seem to flow together without a gap.

But there is a 300-year period in British history between around 800 BC and 500 BC where experts still struggle to explain what happened, where bronze is in decline and iron was not widely used.

"By 1000 BC the bronze axe had become almost a proto-currency," says historian and presenter Neil Oliver.

"It was wealth that was divorced from its use as a metal. And, a little like economic bubbles that we see today, it spelt danger.

"Attitudes to bronze were about to change, with dramatic consequences not only for Bronze Age elite, but for all British society.

"By 800 BC, Britain - along with the rest of Europe - was heading for an economic meltdown."

The difficult thing for historians and archaeologists alike, is that no-one knows for sure what caused this decline.

"It's one of the big problems," says Timothy Champion, professor of archaeology at the University of Southampton.

"There are all sorts of explanations that people have suggested, including climatic change, environmental destruction caused by over-exploitation or even internal revolution by the exploited peasantry.

"Alternatively, it could be external invasions - there is no generally agreed explanation for what looks like a major event."

What is known is around this time, is that bronze in Britain was beginning to be dumped.

There are a number of archaeological sites around Britain where large amounts of bronze, specifically axeheads, have been recovered, such as the one at Langton Matravers, Dorset (1). This is important because of the way historians believe bronze was used in ancient society.

"The significance of [copper and bronze] is as much social as it is a tool," says Sue Hamilton, professor of prehistory at University College London.

"It was made into ornaments and smaller objects. Copper was used so people had ways of adorning and distinguishing themselves but it's not until the late Bronze Age until you have a full set of tools."

So if the idea of status was beginning to turn away from bronze without anything to replace it, social upheaval, it is believed, was inevitable.

"This is a time of crisis", says archaeologist Niall Sharples, of Cardiff University.

"Bronze is used for all sorts of things, but primarily it's creating relationships of status within communities.

"When the bronze goes, you have to find social mechanisms to structure that society."

But what caused the value of bronze to lose its value? Could it be the fault of the impending Iron Age?

"There is iron in the Mediterranean by around 1200 BC," says Prof Hamilton.

"It became more evident in Italy around 1000 BC [and] it was cropping up in a variety of places. This is much earlier than we ever imagined."

But because iron rarely appeared in Britain before around 600 BC, many question whether this could have had a trickle-down effect.

"There were major changes in society but I don't think it was because of iron," says Sir Barry Cunliffe, emeritus professor of European archaeology at the University of Oxford.

"There were many, many factors that were at work in European society.

"There is a globalisation, if you like, of Europe.

"The acquisition of the efficient riding horse from the East comes slowly, but it really gets under way around 800 BC. It is an item of great prestige. Horse riding takes over as a thing of display in the social structure.

"The other thing that happens in society is that links with the Mediterranean improve.

And scientists have recently discovered something else interesting about the period - evidence of severe climate change.

Results suggest that around the time of the bronze being dumped, there was a sharp decline in temperature, all revealed by the midge population.

"Different midge species are happiest at different temperatures, so when it suits them they're going to be extremely abundant," says Stephen Brooks, of the Natural History Museum.

"We find there's a big change in the midges in a very short period of time - maybe over 50 years or so.

"And this corresponds to other evidence from pollen and from peat bogs where, similarly, the evidence is temperature declined and rainfall increased."

And without the technology to quite literally weather the storm, it is thought that this had dire consequences.

"This was a dual crisis that was driving Britain into a period of social turmoil… a crisis that would utterly reshape British society.

"What we're seeing in the early Iron Age is a changing belief. It's as if the people of Britain - hit by climate change in different ways - are having to reassess their lives and their place in the great scheme of things in new ways."

By around 550 BC, it is thought that the decline had ended and the climate had stabilised.

Iron, despite being used across Europe for nearly 1,000 years, began to appear across Britain in increasing quantities. And this created a revolution in farming and food production.

"The time of crisis was becoming a distant memory and the population of Britain grew rapidly," says Neil Oliver.

"Agricultural surplus lay at the heart of a newly emerging economy… and that depended heavily on iron. Unlike bronze, it wasn't the preserve of the elite.

"And that together with its strength and new widespread availability was set to transform society and push us one more step into the modern world."