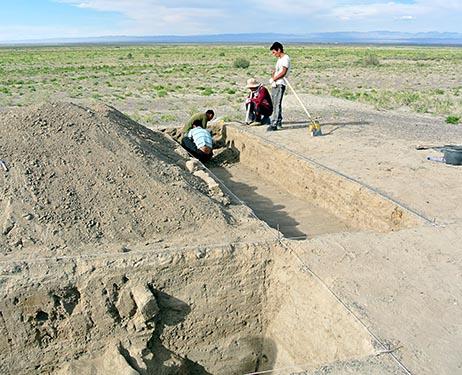 Ruins of a fortress established by Mongol conqueror Genghis Khan are unearthed in southwestern Mongolia in August. (Provided by the Japanese-Mongolian joint research team)

Japanese and Mongolian archaeologists said Feb. 26 that they have discovered the remains of a 13th-century military outpost established for Mongol conqueror Genghis Khan (c. 1162-1227) in southwestern Mongolia.

The joint research team said the discovery could be useful in learning about the Mongol Empire’s strategy on western expansion and trade routes.

“We hope the discovery will be useful in ascertaining the history of the Mongolian Plateau between the 13th and 14th centuries,” said team leader Koichi Matsuda, professor emeritus of Mongol Empire history at Osaka International University.

The researchers surveyed ruins about 880 kilometers west of Ulan Bator in 2001 and found that geographical features around them were similar to the landscape depicted in a travel book written by a medieval Chinese Taoism leader.

The researchers also unearthed pieces of Chinese ceramics dating to the 13th century. An aerial photograph taken in 2001 shows the remains of a fortress surrounded by a soil wall, measuring 200 meters by 200 meters.

Last summer, the archaeologists used carbon dating to determine the age of unearthed wood chips and animal bones found at the site. The analysis showed the wood pieces were from the 12th to 13th century, while the bones were estimated to date to the 14th century.

Based on the findings, the archaeologists concluded the items were from a castle that was used as a military base when Genghis Khan was leading the bloody invasion of countries in central Asia.

The fortress is said to have been commissioned by a close aide to Genghis Khan in 1212. Although researchers from various countries have pointed to multiple areas as the former site of the castle, the actual location of the facility had not been confirmed.