Were Neandertals and Modern Humans Just Ships in the Night?

Were Neandertals and Modern Humans Just Ships in the Night? 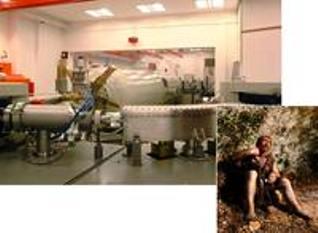 Researchers have long debated how long Neandertals stuck around after modern humans invaded their home territories in Europe and Asia around 40,000 years ago. Some say as long as 10,000 years; others think Neandertals went extinct almost immediately. A new radiocarbon dating study of a Neandertal site in Russia concludes that the latter scenario is most likely, and that Neandertals and modern humans were probably like ships in the night. But don’t expect this to be the last word on this contentious subject.

Neandertals and modern humans likely encountered one another at least twice during prehistory. The first time was at least 80,000 years ago in the Near East, as evidenced by findings of both Neandertal and modern human bones in caves in Israel. But the moderns, who came up from Africa, apparently did not venture any farther than the Near East at that time, possibly due to competition from the Neandertals who were then occupying much of Europe and Asia.

Then, shortly before 40,000 years ago, Homo sapiens—possibly now armed with more sophisticated technology and adaptive skills—began the massive migration that would take our species to pretty much everywhere on the globe, including the territories in Europe and Asia that were already occupied by Neandertals.

Recent genetic studies suggest that Neandertals and moderns interbred the first time but not the second. That has led some researchers to suspect that they were not neighbors for very long during the more recent overlap, especially in Europe. Some scientists, however, say that Neandertals hung on in “refugia” like southern Spain and Gibraltar until as late as 32,000 years ago. (All dates in this story are in calibrated radiocarbon years.)

For the past several years, radiocarbon dating expert Thomas Higham of the University of Oxford in the United Kingdom has been working with researchers all over Europe to improve the accuracy of radiocarbon dating at prehistoric sites. The technique relies on the radioactive isotope carbon-14, whose radioactivity diminishes over time in a predictable manner, allowing researchers to calculate the age of ancient human sites using charcoal from fires or the bones of the prehistoric humans themselves. But ancient carbon sources can easily become contaminated with more recent organic material, making prehistoric sites appear to be much younger than they really are.

Higham and his Oxford colleagues have developed several techniques, including “ultra-filtration” of dating samples, to remove more recent carbon. The results are leading to a reevaluation of radiocarbon dates all over prehistoric Europe. The most recent installment in this redating program, reported online today in the Proceedings of the National Academy of Sciences, involves the site of Mezmaiskaya Cave in Russia’s northern Caucasus region.

A team led by Higham and Ron Pinhasi, an archaeologist at University College Cork in Ireland, used the latest techniques to radiocarbon date the skull bones of a 1- or 2-year-old Neandertal infant found at the site, which has been under excavation by a Russian team since 1987. The team found that the infant most likely died between 42,300 and 45,600 years ago, and an evaluation of the site’s archaeological levels suggested that it was very unlikely that any Neandertals survived at the cave later than 39,000 years ago. These new dates are much older than previous radiocarbon results, which suggested that Neandertals had hung on at the site until as recently as 30,000 years ago.

Higham and his colleagues went on to conduct a statistical analysis of previous radiocarbon dating results from Mezmaiskaya Cave and the six other sites in Europe and Asia—ranging from Russia in the northeast to Spain in the southwest—that have provided direct dates from Neandertal fossils, as opposed to indirect dates from charcoal and other artifacts. Using a statistical technique called Bayesian modeling, which calculates the likelihood that a particular result is valid, the team concluded that none of these directly dated Neandertal bones clock in much later than 40,000 years ago.

Neandertals and modern humans were probably like passing strangers, Pinhasi says. “At this stage” of this ongoing research, he says, the results “do not support any major overlap between Neandertals and modern humans” much after 40,000 years ago, at which time Neandertals were probably going extinct. Pinhasi adds that “many of the very young dates, for example, from Gibraltar, are probably just wrong” due to contamination, mixing of archaeological layers, and other factors.

Wil Roebroeks, an archaeologist at Leiden University in the Netherlands, applauds the results: “These dates ... strongly suggest that the hypothesis of a suggested overlap of 10,000 years between Neandertals and modern humans is falsified.”

But biologist Clive Finlayson, director of the Gibraltar Museum and leader of Neandertal excavations at this British territory at the southern tip of Spain, says that the late dates of 32,000 years that he and his team have found for Neandertal occupations in Gibraltar’s caves—which are not based on direct dating of fossils—are not challenged by the new findings. “This paper is a typical example of the speculative extrapolation that ... archaeologists and anthropologists often do,” Finlayson says. “It does not mean that Neandertals did not survive elsewhere, especially in southern refugia.”