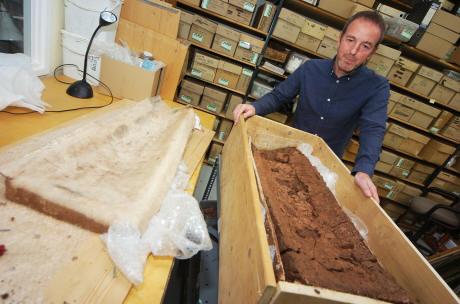 Stuart Palmer with the Roman lead lined coffin that is thought to contain the body of a child. Picture by Jon Mullis 46.013.020.leam.jm1

Archaeologists are preparing to study in details the contents of a coffin believed to contain a Romano-British child.

The lid of the 1600 year-old coffin was lifted in Warwick this week after its recent discovery by metal-detectorist Chris Wright in a field close to the Warwickshire/Leicestershire border.

Archaeologists and scientists gathered at Warwickshire County Council's Archaeology department on Monday (November 11) for the opening, which to the untrained eye looked like it was full of mud, which had worked its way in through cracks in the lead-lined coffin down the centuries.

But experts are convinced the coffin and its contents will provide them with a lot of information.

Stuart Palmer from Archaeology Warwickshire said: “This really is a once in a lifetime opportunity to use cutting edge scientific techniques to investigate Roman period burial customs and mortuary practices, alongside a snap-shot of the local environment at the time of the burial.

“The sediments in the coffin could retain chemical traces of organic materials not available to conventional archaeology. We hope it will shed invaluable light on the Roman Mancetter hinterland.”

"Burials have the potential to reveal signatures of body decay; pre-burial treatment and mortuary practice; clothing and perishable artefacts; diet; cause of death; disease and even drug-use.

“This ground-breaking study will use a variety of tools to reveal hidden secrets and help us to understand the past cultural practices and environmental conditions at the time the child lived, some 1600 years ago."

Over the next few days, the clay and silt that has filled the coffin will be painstakingly removed by experts to reveal the remains of its occupants.

A jet bracelet has already been revealed and it is likely other items of body adornment will be revealed.

* AS a mark of respect to the child, whose name will be long lost to history, Archaeology Warwickshire is running a competition to find one and have come up with the following, suitably Roman, suggestions to pick from -