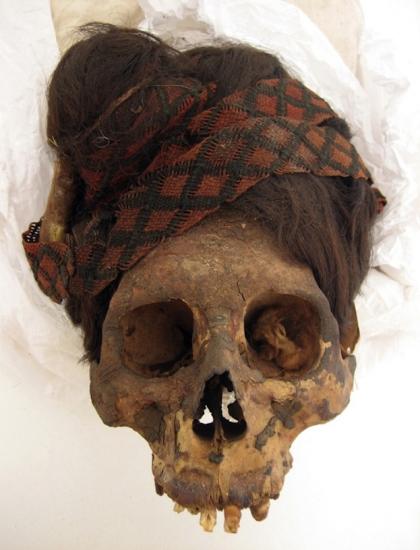 To learn more about the mummies' diets, the researchers took hair samples from 14 individuals and two hair artifacts found at the Paracas Necropolis. This individual wears a red and black headdress. Credit: This article was published in the Journal of Archaeological Science, Vol. 55, Knudson KJ, Peters AH, Cagigao ET. "Paleodiet in the Paracas Necropolis of Wari Kayan: carbon and nitrogen isotope analysis of keratin samples from the south coast of Peru," 231

The hair of 2,000-year-old mummies, long locks adorned with embroidered textiles, is helping researchers determine what these ancient people ate in the weeks and months before their deaths, a new study finds.

A chemical analysis of the mummies' hair suggests these ancient individuals, who once lived on the southern coast of modern-day Peru, likely ate corn, beans, and marine plants and animals, the researchers found.

"We can use hair to look at diet because, quite simply, we are what we eat," said the study's lead researcher Kelly Knudson, an associate professor of anthropology at the Center for Bioarchaeological Research at Arizona State University. [See images of the mummies from ancient South America]

Peruvian archaeologist Julio Tello found the mummies in 1925 in what later became known as the Paracas Necropolis of Wari Kayan, two burial areas located in southern Peru. Many archaeologists have studied the beautifully dyed textiles made of wool, cotton and plants buried with the mummies, which the dry climate preserved naturally.

"The textiles have been sent to museums all over the world," Knudson told Live Science. "But we don't actually know much about the people themselves."

Knudson and her colleagues examined the mummies' hair to see what it would reveal about the ancient diets of Wari Kayan. The researchers got hair samples from 14 individuals buried at the Paracas Necropolis and two artifacts made of human hair from museums in Peru and the United States.

Human hair grows slowly, so about 0.4 inches (1 centimeter) of hair represents about four weeks of a person's life, the researchers said.

"By looking at how far the hair is from the scalp, we were able to look at what they were eating in particular weeks or months before they died," Knudson said.

Moreover, hair is about 45 percent carbon and about 14 percent nitrogen by weight, the researchers said. So, by analyzing different isotopes (a variation of an element) of carbon and nitrogen within the hair, the researchers could determine what sort of food the mummies ate.

"The nitrogen isotope is really good at reflecting seafood consumption," Knudson said. "Which is interesting to us, because these people were living on the Peruvian coast and had access to one of the richest fisheries in the world. But we didn't know how much of that they were using." 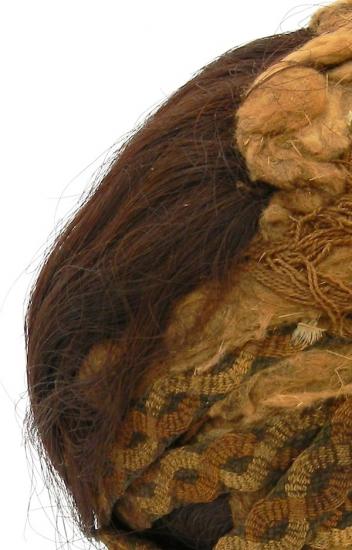 The back of a man's head, showing a headband resting on top of a light brown cotton fiber and a loosely woven cotton cloth.
Credit: Ann Peters

The mummies' hair had "really high" nitrogen isotope values, indicating that they likely ate plants or animals from the sea, the researchers found.

The scientists also looked at the type and number of carbon isotopes. The way that plants photosynthesize energy from the sun determines whether they make carbon 3 (C3) or carbon 4 (C4). Most plants, such as legumes and fruits, make C3, while a smaller number, including corn, produce C4.

The mummies ate a mixed diet of both C3 and C4 plants, the researchers found.

"Corn is just one plant, but in the Andes it was really important as a dietary staple, [and] also a ritual product," Knudson said. The mummies also made corn beer, and the researchers are planning to work with other archaeologists to learn more about who drank the beer by looking at hair chemistry and artifacts buried with the mummies. These artifacts could include mugs used for corn beer.

The hair analysis also showed that the individuals ate similar foods in the weeks and months before their deaths. Recent evidence suggests the Paracas culture may have also lived away from the coast in the Andes Mountains, said Emily Webb, an archaeological scientist of organic geochemistry at the University of Bristol in the United Kingdom, who was not involved in the study.

The study also highlights how important it is to maintain museum collections, the researchers said.

The findings were published in the March issue of the Journal of Archaeological Science.