University of Calgary researchers recently returned to an an archeologically important site in southern Alberta. St. Mary’s Reservoir first launched into the history books when it was partially drained in 1998 to allow for construction of a new spillway. When the water level dropped, tracks and bones of extinct mammals, as well as stone tools, were left exposed. Radiocarbon dating placed the objects at 13,000 years old but when scientists returned this spring to Wally’s Beach, they determined the artifacts were even older, by 300 years. The Herald’s Nikki Jamiesontalked with Brian Kooyman, one of the first researchers on the site in 1999 who co-authored the paper on the new findings, about what this means for Wally’s Beach. 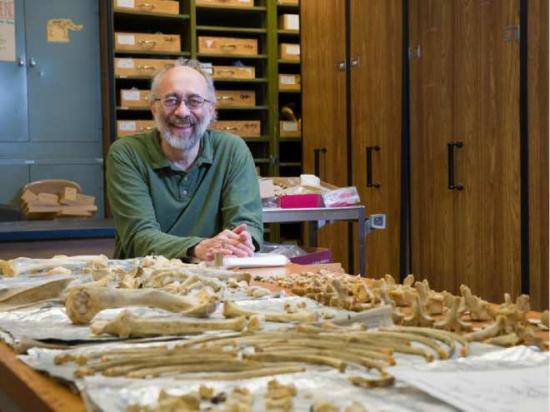 What were the initial findings when you first predated the site in 1999?

At that time, it was the fact that we had the first evidence of, at that time, hunting horses. And that was something that had never been documented in North America before. We never had proof that people hunted horses. At that time we hadn’t found the camel bones yet, but we found those much later, in 2009. At that time, we thought it was Clovis (a prehistoric Native American culture) in age, because we had found these (spear) points, but not in direct association. So that was the first evidence of hunting horses, and it was in Canada, in Alberta … that was quite neat.
Also, of course, the tracks of all these animals, the footprints of all these animals. We have pictures, you can actually see them, there are several mammoth tracks, we have a set of two camel tracks — one adult and one young camel — walking side by side for about 70 metres. It was spectacular in that these are footprints of these animals, and we had never found something like that. It was all because of the sort of odd nature of this corner of southern Alberta.

Why did you go back and re-date the site?

When we suggested that this site was a Clovis hunting site, there were a few people that said “This doesn’t make sense. They’re not hunting the right animals” and then they said “And you didn’t find the Clovis points here … they’re not in direct association with the animals.” So eventually people accepted that yes, this is evidence of hunting horses, but it’s not Clovis. And for us here, in Canada, it’s just that if it wasn’t Clovis, what was it? The two senior authors on this dating paper, Mike Walters and Tom Stanford, have been systematically using the better dating technique that Tom developed. They have been systematically re-dating the archeological sites that are Clovis kind of age, because they believe that some of those sites people said to be Clovis in age were wrong. that some of those sites are pre-Clovis in age, and it’s just because our dating techniques weren’t as precise as they needed to be to start answering that question.
So, Mike and Tom approached (U of C geoscientist) Len Hill and I and said, “What do you think of re-dating Wally’s Beach? We said that would be a great idea, because Len and I always thought that the Clovis site, Wally’s Beach, didn’t quite make sense.
In the end, when the dates came back, that it was pre-Clovis, it kind of made us smile. Because we had always thought there was something that we weren’t quite picking up there, and it’s this better radio-carbon dating technique that Tom Stafford developed that actually allowed that.

What time period was Clovis?

The site was originally dated at 13,000 years ago. Did you think the Clovis period started earlier?

With the re-dating of things, that’s a possibility. It could be that Clovis is earlier, or something like that. But based on the dating of some of the really important Clovis sites in the United States and some of the ones that we felt were earlier, it isn’t earlier. So if you get something earlier, it’s pre-Clovis.

What does the re-dating of Wally’s Beach mean?

What it means is that this unusual hunting pattern we saw at Wally’s Beach, we can see it as the ancestral techniques used by pre-Clovis people and it’s probably the basis on which Clovis hunting developed.
What we see at Wally’s Beach is the first big animal hunting in this area south of the ice sheets. This is the first really good evidence we have of hunting.
It’s the fact that it’s pre-Clovis, that it’s horses and camels — which doesn’t fit that pattern — and it just makes sense all of a sudden. We have a little bit of a better understanding exactly where it fits in the schedule or timeline, if you will, of the development of First Nations culture in the Americas.