A University of Otago-led multidisciplinary team of scientists have shed new light on the diet, lifestyles and movements of the first New Zealanders by analysing isotopes from their bones and teeth.

In research published today in the prestigious international journal PLOS ONE, the team are able to identify what is likely to be the first group of people to colonise Marlborough’s Wairau Bar possibly from Polynesia around 700 years ago. They also present evidence suggesting that individuals from two other groups buried at the site had likely lived in different regions of New Zealand before being buried at Wairau Bar.

The researchers, co-ordinated by the Department of Anatomy’s Associate Professor Hallie Buckley, undertook isotopic analyses of samples recovered from the koiwi tangata (human remains) of the Rangitane iwi tupuna prior to their reburial at Wairau Bar in 2009.

“By examining ratios of carbon and nitrogen isotopes present in bone collagen we were able to estimate individuals’ broad dietary makeup over a 10-20 year period prior to death. Our analysis of strontium isotopes in teeth allowed us to distinguish between people growing up in geologically different landscapes,” says Dr Rebecca Kinaston, who conducted the isotope analyses on the bones and teeth.

The tupuna were originally buried in three separate groups in a large village at the Wairau site. First excavated over 70 years ago, this ancient settlement is one of the most important archaeological sites in New Zealand because of its age and the range of east Polynesian type artefacts found there.

Previous research found that one of the burial groups displayed distinct cultural differences to the two other burial groups at the site. These included the positions in which they were interred and the presence of more numerous and rich grave offerings, including whale bone ornaments and moa eggs generally not found with the other two groups.

The new isotopic analysis of bone collagen and teeth suggests that members of this first group shared similar diets and childhood origins, while individuals in Groups 2 and 3 displayed highly variable diets and spent their childhood in geologically different areas to Group 1.

“Interestingly, Group 1 individuals showed a dietary trend similar to that identified in prehistoric individuals from a site in the Marquesas Islands in French Polynesia, with both sets of people sharing a low diversity in protein sources,” Dr Kinaston says.

In contrast, dietary patterns in Groups 2 and 3 were found to be in line with individuals who spent most of their lives eating from a wide range of protein sources, such as would be available through New Zealand’s then bountiful seal, moa and other bird populations.

The large range found in Group 2 and 3’s strontium isotope ratios could reflect that they grew up in regions outside of Wairau Bar—but not where Group 1 did—and also that they were hunting and gathering across a wide geographical range, says Associate Professor Hallie Buckley.

“This is consistent with other archaeological evidence that the first settlers in New Zealand were highly mobile. That members of Groups 2 and 3 were still buried back at Wairau suggests that this village may have fulfilled both a ceremonial and home base function.”

If this is the case, this may represent the roots of the tangihanga ritual, in which Maori are buried in their ancestral lands, developing among these first New Zealanders, Associate Professor Buckley says.

The First New Zealanders: Patterns of Diet and Mobility Revealed through Isotope Analysis

Direct evidence of the environmental impact of human colonization and subsequent human adaptational responses to new environments is extremely rare anywhere in the world. New Zealand was the last Polynesian island group to be settled by humans, who arrived around the end of the 13th century AD. Little is known about the nature of human adaptation and mobility during the initial phase of colonization. We report the results of the isotopic analysis (carbon, nitrogen and strontium) of the oldest prehistoric skeletons discovered in New Zealand to assess diet and migration patterns. The isotope data show that the culturally distinctive burials, Group 1, had similar diets and childhood origins, supporting the assertion that this group was distinct from Group 2/3 and may have been part of the initial colonizing population at the site. The Group 2/3 individuals displayed highly variable diets and likely lived in different regions of the country before their burial at Wairau Bar, supporting the archaeological evidence that people were highly mobile in New Zealand since the initial phase of human settlement. 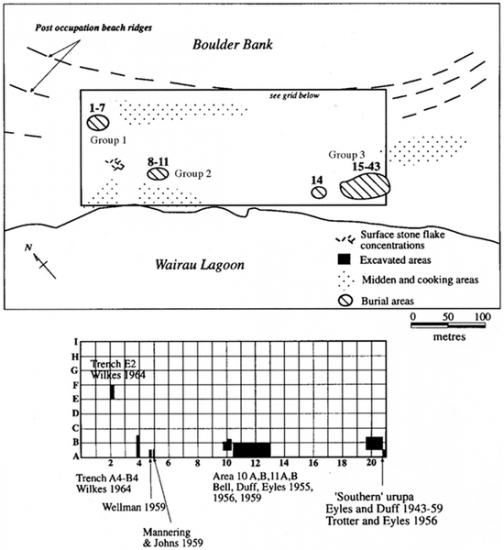