New Guinean highlanders developed agriculture a millennia before their neighbors, and without the cultural developments marking the Neolithic transition elsewhere in the world

That eureka moment can happen more than once, and about 7,000 years ago in the highlands of New Guinea, the inhabitants began to transition from a precarious lifestyle of hunting and gathering to the slightly less precarious lifestyle of hunting, gathering and farming. They did so independently, without learning these special skills of sowing and reaping from anybody else, archaeologists conclude based on excavation of a site called Waim.

By around 5,000 to 4,000 years ago the New Guinea highlanders had mastered wetland agriculture, the archaeologists write this week in Science Advances. That was over a thousand years before the peoples around them.

Starting around 12,000 years ago, as the Ice Age waned and the northern hemisphere warmed, peoples around the Levant began to develop agriculture. It may have even begun in today's Turkey. Agriculture also started to develop in Asia. There are indicators of much earlier experimentation with growing some grains – as long as 23,000 years ago in what is today Israel – but those efforts were short of subsistence-level agriculture.

The process of abandoning the nomadic hunting and gathering lifestyle for early subsistence farming during the period defined as the Neolithic era happened gradually, over hundreds and thousands of years. People continued to hunt and gather as they learned to sow and reap (and still do, especially if you count the supermarket as a hunting-foraging ground).

Generally speaking, as various peoples discovered the advantages of gaining some control over their intake relative to trapping micro-mammals and chasing flying food and quadrupeds, this lifestyle transition during the Neolithic had certain common features in terms of social and technological systems. 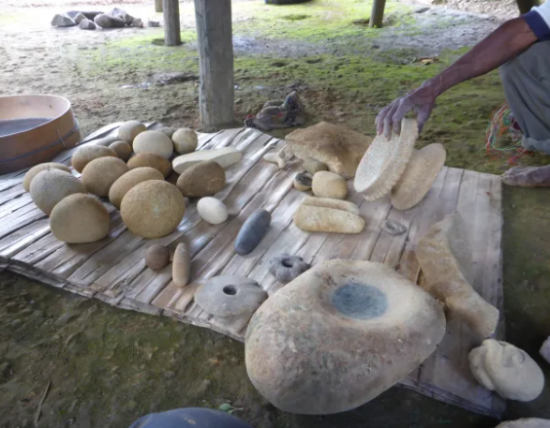 And that is how the University of New South Wales’ Ben Shaw and the team realized that in the highlands of New Guinea, the Neolithic transition that began about 7,000 years ago was different: The typical common hallmarks of the Neolithic weren’t there.