Wadi Faynan 16 (Jordanie) - First Buildings May Have Been Community Centers

First Buildings May Have Been Community Centers 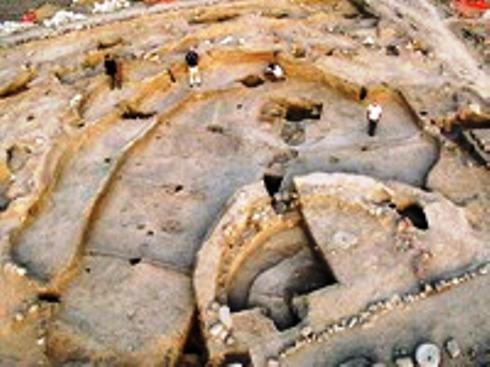 Community center? Early farmers may have used this structure for group processing of wild plants and also for performances.

Nearly 12,000 years ago, the world’s first villages began to spring up in the Near East. Until recently, archaeologists assumed that the stone and mud-brick buildings that made up these small settlements were the houses of the first farmers, who had begun to give up the hunting and gathering lifestyle. But the discovery of a large, amphitheater-like building at a site in southern Jordan, reported today, adds to growing evidence that the earliest permanent buildings might not have been homes, but community centers. The find, researchers say, suggests that during the advent of agriculture—a pivotal turning point that prehistorians call the Neolithic Revolution—early farmers may have come together first to engage in communal activities, and only later did they begin living together.

“This is definitely one of the most exciting discoveries in recent years associated with the [Neolithic] in the Near East,” says Nigel Goring-Morris, an archaeologist at the Hebrew University of Jerusalem in Israel.

Archaeologists have little doubt that the larger villages that crop up after about 10,000 years ago across the Near East—an area that includes modern-day Turkey, Syria, Jordan, and neighboring countries—were residential communities made up of individual family houses. At 9500-year-old Çatalhöyük in Turkey, for example, thousands of people lived in a tight, honeycomb-like cluster of mud-brick homes that they entered through holes in the roof, and hundreds of similar sites have been excavated across the region.

But the earliest Neolithic villages, which date to about 11,700 years ago, are much smaller, and include a variety of buildings of different sizes and shapes. At an 11,500 year old site called Jerf el Ahmar in Syria, for example, the entire community apparently used a number of structures, including storehouses and a circular building with a long bench. And at 11,000-year-old Göbekli Tepe in southeastern Turkey, researchers have argued that fantastic monolithic stone structures were part of a community ritual center.

Today, in a paper published online in the Proceedings of the National Academy of Sciences, a team led by Bill Finlayson, director of the Council for British Research in the Levant in London and archaeologist Steven Mithen, an archaeologist at the University of Reading in the United Kingdom, reports the discovery of a large, oval-shaped building at a site in southern Jordan called Wadi Faynan 16 (WF16). Early farmers lived here between between 11,600 and 10,200 years ago, cultivating wild plants such as wild barley, pistachio, and fig trees, and hunting or herding wild goats, cattle, and gazelle.

The structure, designated building 075 was made of mud-brick, with a floor of mud plaster, and measures a whopping (by Neolithic standards) 22 by 19 meters. Its central area is surrounded by a long bench about a meter deep and half a meter high. In parts of the building, there is a second bench above the first one that forms an additional tier of seating. And along the southern side of the building, the lower bench is decorated with a wave pattern incised into the mud-brick.

Thus the structure echoes the architecture of the Jerf el Ahmar community building--but building 075 is about three times larger. The building’s central area also contains a series of stone mortars set into plaster platforms on the floor, which may have been used to grind wild plants. The structure includes a number of post-holes, which the team thinks might have held up a roof that covered at least part of the building. The team also found two other, smaller structures nearby, which it interprets as storehouses for cereals and other food resources.

The three structures, the team reports, lie within a cluster of other buildings in a 1-hectare site. But none of these other buildings appear to be domestic houses either: Rather, they seem to have served as storehouses or workshops; one building contained green stone beads and seems to have specialized in their manufacture.

Finlayson, Mithen, and their colleagues conclude that the evidence from WF16, combined with evidence from other sites, suggests that the earliest villages were not made up of houses, but rather communal structures where people came together to process their wild harvests and possibly also to engage in community performances. “These settlements appear to be all about community and not about emerging households,” the team writes, adding that this “ritualized community activity” might have helped to bring together the work force necessary to harvest the wild crops.

The authors don't speculate on where the farmers lived, and there is no way to be sure. Researchers working at similar sites have surmised that they lived in small camps near the central site, but such open air habitations are very difficult to find and often leave little or no archaeological traces.

Archaeologist Trevor Watkins, emeritus at the University of Edinburgh in the United Kingdom, says he “agrees strongly” with the authors’ conclusion that the social changes that took place during the transition from hunting and gathering to farming were at least as important as the later economic changes that led to full-blown domestication of plants and animals. But he thinks that it’s still possible that some of the other buildings at WF16 were used as domestic dwellings. Nevertheless, Watkins says, the communal activities at WF16 and other Neolithic sites probably created “powerful bonds of collective identity” in the earliest farmers that kept them together in stable societies “over many generations.”