PART.2
The excavators postulate that the galleries also served to store boat parts, based on the discovery of hundreds of pieces of wood, fragments of oars, and sections of ropes found inside. Among the wood bits were long wooden hull boards cut from logs of cedar from Lebanon, further evidence of the ancient Egyptians' long-distance trading in the 2nd millennium B.C.E..
Factory for boats?
Tallet goes one further. He is convinced that the galleries were not only used to store these parts but also for reassembling ship kits that were transported over the desert roads to the Red Sea.
His theory is supported by the discovery at a different pharaonic harbor, Ayn Sukhna, some 120 kilometers up the coast, by the same archeologists a few years ago.

The small black entrances lead into vast galleries carved out of the rock at Wadi el-Jarf, in which a vast number of precious papyri were found. Pierre Tallet
At Ayn Sukhna, which is also believed to have been connected with the mining operations in Sinai, two complete boats (which however were burnt in antiquity) were found inside the rock-hewn galleries.
“Ayn Sukhna probably replaced Wadi el-Jarf," postulates Tallet. "We can determine that Jarf was probably closed at the end of the reign of Cheops, and that Ayn Sukhna was opened about 10-15 years later, under the reign of Khaefre, his second successor. Ayn Sukhna is closer to the administrative city of Memphis, which is probably the reason why it was finally selected. Jarf was in use only for a few decades, but Ayn Sukhna was regularly used by the Egyptian for more than a thousand years."
Possibly, Jarf's use was intermittent, Tallet speculates: it might have only been used for expeditions to secure a supply of natural resources. “In between expeditions, sometimes for years, the place would be closed and the boats would be stored in the galleries. This is the 'raison d'être' of the caves,” he told Haaretz.
Whispers of a pyramid inspector
Perhaps most astounding was the discovery in summer of around 800 pieces of papyri, dating to the reign of Cheops´s 27th regnal reign. This is the oldest papyrus archive ever found in Egypt, according to the Egyptian Institute of Antiquities.

Entrance to a gallery hewn out of the rock at Wadi el-Jarf - Pierre Tallet
These ancient documents were extraordinarily well preserved: some sheets were as much as a meter long.
The excavators believe that the papyri are the archive of a team of sailors, and includes two categories of documents. One is accounts organized in tables, corresponding to daily or monthly deliveries of food from various areas including the Nile Delta: mostly bread and beer for the port workers.
The other documents are logbooks recording everyday activities of a team led by an inspector named Merer, an official from Memphis.
Merer, who oversaw a team about 40 men, was in charge of building the Great Pyramid in Giza. The documents describe transportation up the Nile River and the work at the limestone quarries, in the form of a time table.
Every fourth day, blocks would be delivered to a pyramid construction site on the Giza plateau called the “Horizon of Cheops”, the papers explain. 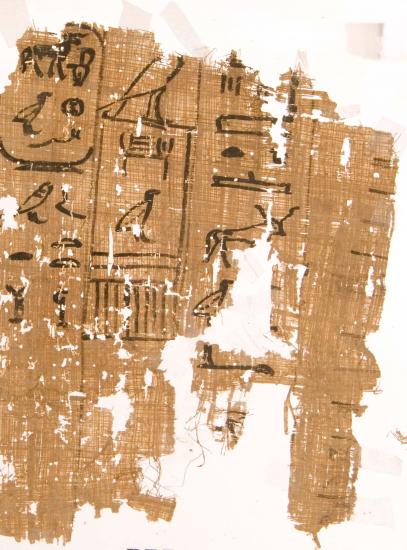 A papyrus found at Wadi el-Jarf that mentions King Khufu - that being the original Egyptian name of the pharaoh who the Greeks would call Cheops. Pierre Tallet
Did Herodotus libel Cheops?
Merer's journal also mentions his passage through an important logistic and administrative center, ‘Ro-She Khufu' - which seems to have functioned as a stopping point near the Giza plateau.
It is especially emphasized that Ro-She Khufu was under the authority of a high-ranking official, Ankhhaef – none other than the half-brother of Cheops himself. Ankhhaef was the pharaoh's vizier and by the end of his reign, had achieved the status of "chief for all the works of the king".
Other logs in the same archive provide information on other missions accomplished by the same team of sailors during the same year, including building a harbor on the Mediterranean Sea coast.
Taller postulates that the harbor installations at Wadi el-Jarf served the Great Pyramid project by obtaining the vast amounts of copper necessary for tools (the pyramid was built millennia before the Iron Age), and some specific equipment used at Giza.

One of around 800 papyri found in rock-carved tunnels, Wadi el-Jarf. The archive of documents, detailing how to build the Giza pyramid, is the oldest such ever found. Pierre Tallet
Whatever the case, the Greek historian Herodotus describes Cheops as a harsh taskmaster, who forced all Egyptians to devote 20 years of their lives to dragging stone to the Great Pyramid he was building for his own aggrandizement. Cheops employed so many workers that it cost 1600 silver talents just to keep them supplied with black radish and onion, Herodotus reports (Histories 2.124).
Today many Egyptologists suspect that the “black legends of Cheops” are exaggerated and that Herodotus inflated and the number of workers needed to build the pyramid.
Recent calculations estimate that actually building the pyramid required 5,000 men, or, 15,000 if one includes people bringing the raw material to Giza, says Tallet, and adds, “They were not slaves, but specialists who were employed all the year long by the royal administration - and, from the records that we have on the papyrus, they were rather privileged.”

Boat parts and rope found in the tunnels carved into rock at Wadi el-Jarf. the pieces date to some 4600 years ago. Pierre Tallet