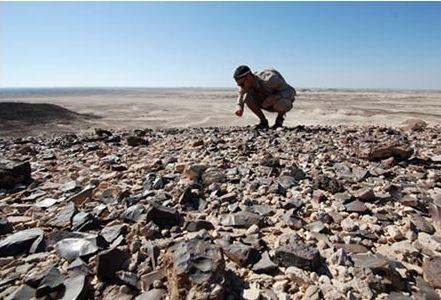 Set in stone. A researcher examines an area above Wadi Banut in Oman, looking for Late Nubian tool. 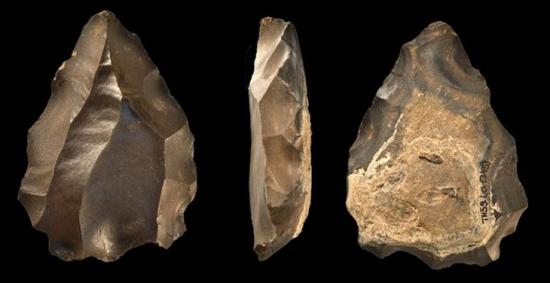 More than 100,000 years ago, a group of early humans stood on the western shore of the Red Sea, gazing across the Bab-el-Mandeb Strait at the Arabian Peninsula. The land was lush and verdant, beckoning them to cross. But did they? A new analysis of stone tools discovered in Oman suggests that they did, indicating that humans may have ventured into Arabia tens of thousands of years earlier than many scientists believed.

The map of Homo sapiens' journey out of Africa is a work in progress, continually sketched and redrawn as researchers find new data. Genetic and archaeological evidence suggest that our species first left Africa roughly 80,000 years ago, traveling north through the Middle East to populate Eurasia. In recent years, however, archaeologists have discovered stone tools on the Arabian Peninsula that to some suggest that modern humans may have left Africa as early as 125,000 years ago by a southern route.

The problem with many of the stone tools found on the Arabian Peninsula, says New York University archaeologist Christian Tryon, is that they don't have much personality. "Stone tools are often unexciting things," he says, "like Paleolithic screwdrivers and hammers." None, he says, displayed signs of craftsmanship that could identify them definitively as the handiwork of African H. sapiens versus other hominids, such as Neandertals. None, that is, until archaeologist Jeffrey Rose of the University of Birmingham in the United Kingdom uncovered tools in Oman in 2010 with clear African connections. "This is the first time I've been convinced," says Tyron, who was not involved in the new work.

In a climate like Arabia's, desert winds and sand erode all but the strongest materials. "Everything breaks down," Rose says, "but rocks don't." The trick, he says, "is squeezing information out of them." He compares the process of finding and studying stone tools to being blindfolded and set down in a time and place where the only way to tell where and when you are is to listen to the language being spoken. For those who understand their language, he says, stone tools can tell us all about their makers.

Rose's team of archaeologists and geologists gathered more than 800 artifacts from ancient riverbeds in the Dhofar Mountains of southern Oman. A nearby outcrop of a flintlike rock called chert, they believe, was the source for many of the stone tools they found: long, triangular blades shaped with six or seven deliberate, strategic strikes. Rose says this distinctive method of toolmaking, classified as "Nubian Middle Stone Age," is unique to a region of Sudan in northeast Africa and has never been found outside the Nile Valley in northeast Africa. A dating technique called optically stimulated luminescence, which measures how much radiation a mineral has absorbed over time, revealed that the tools are roughly 106,000 years old, the team reports today in PLoS ONE. Rose calls them "a trail of stone breadcrumbs," strewn by a group of H. sapiens from the Nile Valley to Arabia.

Other scientists agree that the tools in Oman show striking similarity to those in northeast Africa—although they don't necessarily agree about what that means. Archaeologist Philip Van Peer of Catholic University of Leuven in Belgium, who played an important role in first defining the Nubian tools in Africa, is very excited about Rose's discovery. The Arabian tools, he says, "are almost more Nubian Complex than Nubian Complex." That's strong evidence for early modern human migration across the Red Sea to Arabia, he says, rather than the more northern route.

Paleoanthropologist John Shea of Stony Brook University in New York is also impressed with the study. "Jeff Rose has been looking for evidence for Afro-Arabian links for a long time, working in places that are almost unimaginably difficult to conduct research," he says. "This is an exemplary case of hard work paying off, something to which aspiring students of archaeology should pay close attention."

Shea says he finds it compelling that two prehistoric groups living at the same time in Sudan and Oman made the same choices as they shaped their tools—especially at the beginning of the chipping process, when the number of available choices is "nearly infinite." This, he says, is "very convincing evidence" for a cultural connection between the two regions. Still, he says that although it's likely that the tools Rose's team found were made by H. sapiens rather than another hominid, scientists will have to find human fossils nearby to know for sure.

If modern humans were living in southern Arabia 106,000 years ago, the important question for human history is what happened next. Did they die out in Oman—another "failed expansion," as archaeologists describe it—or migrate north, going on to populate the globe? If the latter, it would challenge current genetic data placing global human migration out of Africa perhaps 80,000 years ago. Instead of "out of Africa," says Rose, "we could be looking at 'out of Arabia.' "

As for why early humans ventured to Arabia in the first place, Rose has one hypothesis. "These guys were wily suckers," he says. "Perhaps it was just curiosity."